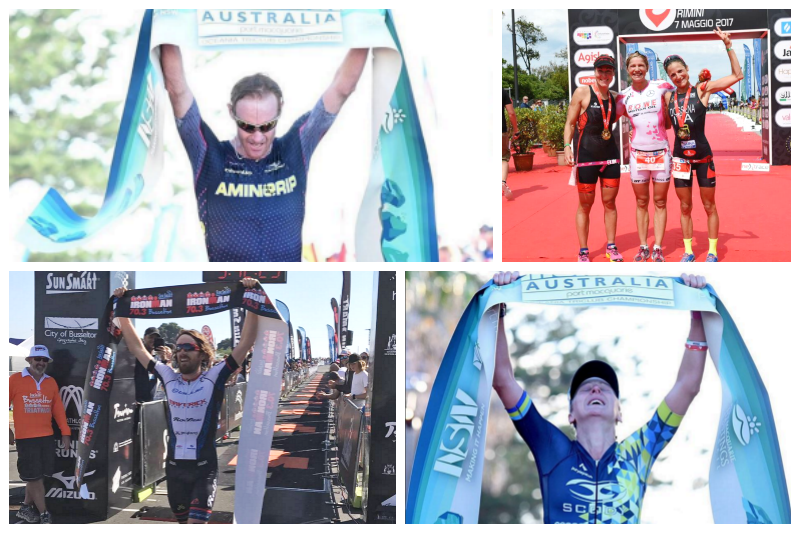 IRONMAN Australia featured two first-time winners this year: David Dellow and Laura Siddall. Last year at IRONMAN Australia Clayton Fettell lead from the gun and was overtaken in the run by David Dellow and Tim Reed, with Reed holding on for the win. This year was almost a carbon copy of that race, except this time Dellow got the win with Reed 2nd and Fettell 3rd again. Laura Siddall took home her first IRONMAN win in 9:16.38, with Michelle Gailey second in 9:44.15, and Jessica Mitchell rounding out the podium in 9:53.48.

Dan Wilson won his second IRONMAN 70.3 title this weekend with an emphatic performance at Sunsmart IRONMAN 70.3 Busselton. He ran sub 1:13 for the 21.1km run to win in 3:42.26. Multi world champion Craig Alexander gave another boost to the burgeoning competitive 40-somethings to finish second, 1:26 behind. In the women’s race, Katey Gibb held the ribbon high in 4:17.31. She was third here for the last two years, and has now fixed her breakthrough victory as a professional.

Thirty-one Pro Men lined up on the starting line, with great expectations for the announced duel between Giulio Molinari, the defending champion here in Rimini and Italian-American Davide Giardini.  Giardini issued a challenge to Molinari in Thursday’s press conference raising the intensity pre-race.

The village swim brings athletes to compete in the waters of the Adriatic Sea slightly ruffled by the breeze and a slight swell that will be able to affect some athletes .   First out of the water is Giardini, followed shortly by Giulio Molinari and the Spaniard Baldellou.  On the first kilometers of the bike, however,  Giulio Molinari decided to upped his pace moved into the lead at about the 17 km mark.  Molinari established a two-minute lead on  two pursuers. Halfway through the race to the chase pack includes Italian Baldellou, Volar, Degasperi, Wollner, Smales and Schmid.

At the last stop before returning to T2 Giulio Molinari firmly maintains the rlead with five minutes ahead of Austrian Thomas Steger, followed by  Degasperi, Smales and Schmid. The  whole 21 kilometers of the run was a triumphant parade for Molinari, managing the pace just right not to be threatened. Behind him, the young Austrian Thomas Steger rises to an egregious performance and manages to maintain a safe gap between himself and teammate Stefan Schmid. The finish line is just that the order of arrival male, with Giulio Molinari once again on the highest step of the podium finishing in 4:03:28, a good 3:49 on Steger.   Schmid captured bronze.

Giulio Molinari: ‘I am happy to defend the victory here last year. I particularly love this race and the cycling route is perfectly suited to my abilities. In the  swim I had the opportunity to follow Davide Giardini who set up immediately a very high pace. This allowed to immediately make the move and to get the favor in the race ‘ .

The women’s race started a few minutes after the men’s start and eyes are all laid on Hannah Drewet, the British in her second start in Challenge Rimini and the German Anja Beranek, fourth at the World Ironman in Kona last year.

The young British Hanna Drewett, was first out of the water followed by the Croatian Sonja Skevin. On the bike, a short distance separate thie lead duo ahead of Beranek and the Swiss Derron.  Beranek decided to push hard on the bike to immediately recover the gap between her and Drewett.  Beranek  overtook the leaders at around the 17km mark and kept the lead, with an advantage of about 1’30 “on the young British and Derron third. At the halfway point, Beranek was able to increase her lead, but there were changes in the chase pack.  A  gap of 2’53 was established by Beranek versus Derron, who also has a minute gap over Marta Bernardi. The fourth positionat this point of the race was in the hands of the Corach.

Just like the men’s race, the run all but confirmed the race for Beranek.  She would not be threatened the rest of the way and would finish in 4:34:50.  They were shuffles in the 2nd and 3rd podium positions, as the Spaniard Judith Vaquera would finish in 2nd, a good 4:36 behind the champion.  Sara Dossena (ITA) finished in 4:40:02 to snatch 3rd.