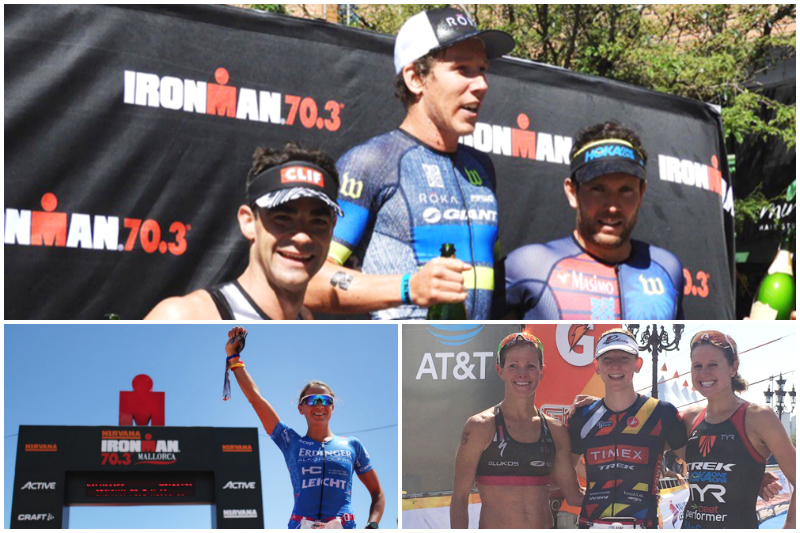 Billard puts the hammer down – Bilham reigns on the run

Bertrand Billard (FRA) really put the hammer down at the scenic bike course which led the field through the heart of Provence. The race was still at an early stage, when the 2016 champ attacked aggressively on the bike. Billard came out of the water in third place, and he didn’t want to wait for anyone after winning in Aix the year before in a no-swim race. He stormed onto the bike course and made the strong pro field suffer soon on the challenging route. On the first third of the course, Billard put 3:30 minutes on his pursuers and spent the rest of the day hammering at the front.

Billard went off and away, and he had an advantage of almost seven minutes, when he started the run. Obviously, there were no reasons to worry about for the strong runner. Billard looked strong and comfortable, but after the first of three run laps he slowed down a bit – and remarkably on the final five kilometers of the race.

The defending champion felt as the upcoming winner, until he hit the final carpet and way to the finish line. The 29-year-old French was already cheering with the fans, when he heard bad news. His fellow countryman Denis Chevrot came off the bike far behind Billard in runner-up position, but he moved through the challenging run course like a Blizzard. Chevrot almost managed a sub 1:10 run split on this tough course and he tried his best to outsprint Billard on the final meters. The defending champ crossed the line with a lead of one second, there was no time left for celebrations.

Emma Bilham (SUI) and Maria Czesnik (POL) had a back-and-forth competition, which highlighted the women’s race. Bilham led after the swim, before Czesnik and as well Natalie Seymour (GBR) tried hard to open up a gap at about 50 kilometers of the bike. The lead changed a couple of times, but Bilham was just too strong on the run to struggle.

Germany’s Andreas Dreitz was full of hope for a special win in Alcudia, when he came off the bike. The three-time champion led the pro field in the first event of the 2017 IRONMAN European series as powerful as he had done in past. Dreitz led the way in impressive fashion, but this time things were much more complicated for him than they had been in history.

The British co-favorite David Mcnamee was in the top group right from the beginning. Once the strong biker Dreitz appeared at the front after a weaker swim, it was Mcnamee’s job to follow. When Dreitz made his early pass, he knew what to do: Hit the gas and stay with the defending champ as close as possible.

As expected before, Dreitz made his decisive move in the tough climbs of the Tramuntana Mountains. He could drop most of the co-favorites successfully on his way through this hard section. While others got more lost for about the rest of the race, one athlete was not willing to let the German go and take his fourth victory: Mcnamee. Two years after the British ranked among the Top 3 in an IRONMAN event for the first time, the 29-year-old wanted nothing else but the win in Alcudia. Mcnamee came off the bike 1:26 behind Dreitz. The gap was small and Mcnamee ready to fly on the run and to take his first IRONMAN 70.3 win. He took a deep breath on the first 10 kilometers and pushed his pace especially on the second half of the run to nail the win.

In women’s race, Laura Philipp had a similar race tactics compared to Dreitz, and she fulfilled her plans successfully. Like the top favorite in men’s competition, she was a bit behind in the water and took over early on the bike. Compared to men’s competition, Philipp’s advantage after the bike was much bigger. Thanks to a solid lead of almost four minutes after the bike and a fast and steady pace on the run, Philipp had no issues to bring the title home in front of the fastest female runner of the day, Emma Pallant.

Top-notch athletes made their way to Northern California this weekend to take on the new and incredibly scenic course at IRONMAN 70.3 Santa Rosa. It wasn’t too much of a surprise to see Andy Potts (USA) in the front of the race by swim’s end in Lake Sonoma, but he wasn’t alone. Sam Appleton (AUS) made it to the shoreline in front which was the first of many timing mats he’d hit before his competitors.

Appleton didn’t waste much time on the ride as he was able to drop his swim compatriots fairly quickly. It was only Joe Gambles (AUS), who started the bike 30 seconds back, that could hold Appleton’s pace briefly. Gambles kept it close for most of the ride only to end up losing three minutes in the last 25 miles. No doubt Appleton was on another level on the bike today coming off with 3:30 on Gambles, 4:39 on Justin Rossi (USA), and almost eight minutes on Tim O’Donnell (USA), Potts, and Jordan Rapp (USA).

Once onto the run Appleton showed no sign of fading as he continued to put time into the others early in the run. Gambles was able to claw back a little time at the end to finish 3:45 back and O’Donnell ran a 1:14:17 to come across the line in the final podium position. Potts held strong on a tough day for fourth and a breakthrough IRONMAN 70.3 performance for Alex Libin (USA) found him in fifth place.

Holly Lawrence (GBR) bested the rest of the women at the North American IRONMAN 70.3 Pro Championship just a week ago on a tough course in St. George, Utah. Some would wonder if she would have enough in the tank for a top performance just seven days later. Clearly she did. Lawrence did it alone all day starting with a 24:38 swim split that had her out of the water with a 50 second lead on her closest chaser, Kelsey Withrow (USA). Carrie Lester (AUS) and Kaisa Lehtonen (FIN) were not too much further back and the three chased in close proximity to each other most of the day. Pre-race favorite Sarah Piampiano (USA) found herself over six minutes back out of the swim and with some work to do.

Lawrence pushed the pace hard and early and that was clear with the gaps early on. By mile 30 she had five minutes on Lehtonen, and over seven minutes on Withrow and Lester. Piampiano had also lost time at this point, being over 10 minutes in arrears. Late in the bike Lawrence claimed her watts fell from near 250 to 150 and that she was “seeing stars” at the end of the ride. Lester was seemingly the only one to keep the pace on and continue to lose time over the last 20 miles.

Onto the run with nearly eight minutes on her competitors, Lawerence could settle in to a comfortable pace and force others to chase. Lehtonen seemed to have trouble early on the run but was able to stabilize and push the back half of the run and put some pressure on the other athletes. Sarah had the run of the day however and by the end of the 13.1 she had pulled within five minutes of Lawerence at the finish. Lester and Lehtonen had a tight last few miles with some shoulder to shoulder running, with Lehtonen pulling off the best late miles moving into third. As if we didn’t know Lawrence was on a tear, now we do. Three for three in IRONMAN 70.3’s this year and all in dominant fashion.

Collington and Seymour too hot to handle in Mexico

Race winner Kevin Collington (USA) patiently waited for the run to let the dynamics of the race settle down before making his move towards the front. In typical Andrew Starykowicz (USA) fashion, he hammered the bike for a race-best time of 1:57:23 which resulted in Collington facing a manageable +1:47 deficit at the start of the run. It didn’t take long for Collington to assert his authority on the race, making the pass on a fading Starykowicz before the first three km’s of the run were completed. Collington would have to fend off a late charge being mounted from behind by Tyler Butterfield (BER) to claimed the win with a 3:42:09 clocking.

Jeanni Seymour (ZAF) notched her second win of the season but putting in a solid performance in all three disciplines in Mexico. Seymour exited the water with a large chase group two minutes back of the swim leaders and dismounted her bike in sole possession of second place and just under two minutes back of Lauren Brandon (USA) who had lead from the start of the race. Seymour wasted little time and grabbed the lead in the opening km’s of the run and quickly put the race to bed and would eventually win the race by a winning margin of +4:56 on her closet rival.