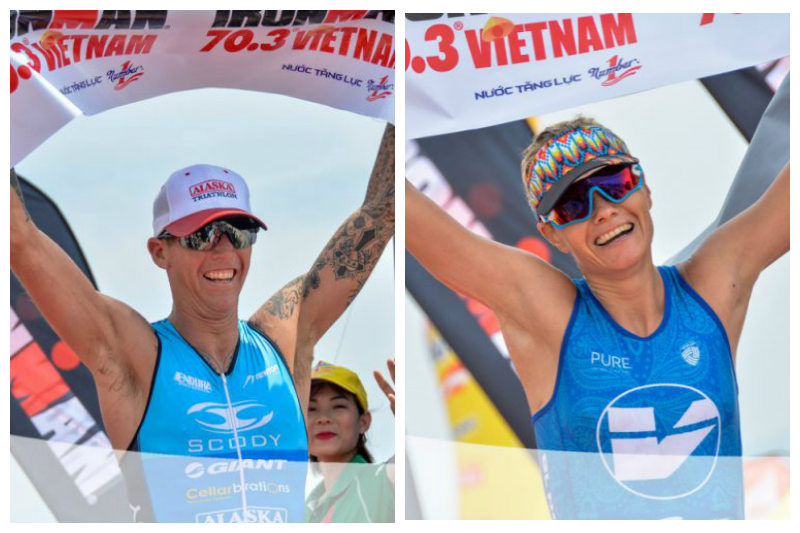 Tim Van Berkel of Australia and Anna Eberhardt of Hungary take the elite titles in the 2017 Ironman 70.3 Vietnam in the coastal city of Danang, Vietnam.

Tim Van Berkel came out in the swim last in a pack of strong contenders that included Michael Raelert (GER), Matt Franklin (NZL), Luke McKenzie (AUS), Sam Betten (AUS), Alex Polizzi (AUS), Ivan Kalashnikov (RUS), and Eric Watson out of Bahrain.  Betten was first out of the at 24:50.  Berkel came out in 25:04. 2-time world champion Michael Raelert made the move in the bike, and had a pretty decent lead around the 30km mark, but suffered mechanical troubles in the bike and would eventually dnf.   Berkel and Phillips took the lead and would eventually be the leaders heading into T2.  Kiwi Mike Phillips had the day’s best bike split at 2:06:05.  Berkel was 2nd best at the bike at 2:06:18.

Immediately out of T2, Van Berkel proved he had the fresher legs and took the lead and gradually built on it.  He would coast on a relatively hot day in Danang, stamping out the day’s best run split at 1:20:20. Ivan Kalashnikov would take 2nd from Phillips after having the 2nd best run split at 1:21:19.  Berkel finished in 3:56:19, a dominant 4 minutes and 13 second victory over the Russian Kalashnikov.  Phillips secured third at 4:02:14.