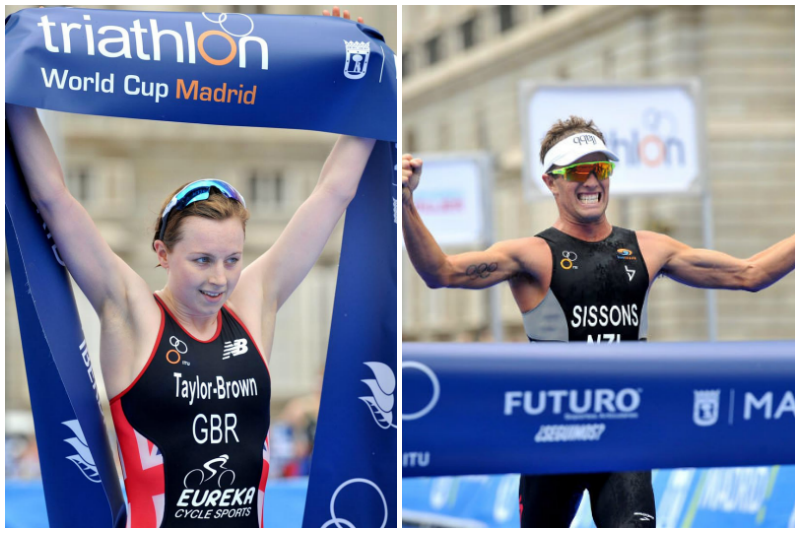 It was a day of firsts in the Spanish capital for the 2017 ITU Madrid World Cup, with both Ryan Sissons (NZL) and Georgia Taylor-Brown (GBR) winning their first ever World Cup. Also first on the podium were Taylor Spivey (USA) and Chelsea Burns (USA), as well as Raphael Montoya (FRA) while his compatriot Simon Viein grabbed in Madrid his second world cup top three finishes.

Women’s race
The women’s race started with Spaniard Carolina Routier leading the water since the very first strokes, opening a gap of a few seconds during the first lap of 750m, to maintain it until the swim exit, and to no one’s surprise: the Spaniard has led the swim in 21 out of the 32 major races she has started so far.

With 20 hilly kilometers ahead, Routier was quickly chased by a group of seven women, including Americans Taylor Spivey,  Chelsea Burns and Erin Dolan, Natalie Van Coevorden (AUS), Taylor-Brown, Sara Perez Sala (ESP) and Naya Kingma (NED). They confronted the seven climbs of the Cuesta de la Vega, a demanding slope with 8% gradient, all together under the Madrid’s sun.

“It was the toughest course I’ve ever raced, but also one of the best ones”, said Taylor-Brown after the race. “That slope was just terrific, but having such a great atmosphere, with crowds cheering, really helped to get trough it” she explained.

The group of eight riders arrived together to T2, with the youngest of the pack, World Cup debutant Taylor-Brown, leaving transition first. And it was then just for her to keep an eye on her rivals and keep the distance, which grew a bit more on each of the four laps to finish with a fantastic victory for the young British, giving UK three wins out of five World Cups so far this season.

The young brit was the first crossing the finish line at the Royal Palace in Madrid, stopping the clock on 2h08.05, followed by American Taylor Spivey 51 seconds behind. “It was one of the hardest races I’ve ever done in my career, but also one of the best ones. I loved the atmosphere, the hilly circuit and I just tried to save some energy during the bike for the run course, which I knew it was going to be also really hard”, she said.

The third position was for another World Cup debutant, American Chelsea Burns, who didn’t expect to see herself on the podium in Madrid. “I raced great, I felt great, and I just kept on pushing hard”, she said. Local favourite Routier managed to finish on sixth place.

60 triathletes took the stage in the Casa de Campo lake, in Madrid, for the start of the 2017 ITU Madrid World Cup, with some great names among the ones to watch, and with them not disappointing since the very first meters of the swim.

“I think I did really well, it was a very compensated race. I swam well, then managed to b in front of the big group at front for the bike course, and then I was just concentrated on keeping myself well hydrated and keep calm during the run”, said Ryan Sissons (NZL) after his win. “The first lap of the run was really hard, but then I started feeling better, and I saved a bit of energy for the final push. I am really happy of this win here in Madrid”.

Norwegian Kristian Blummenfelt –who just finished third in Yokohama WTS- and kiwi Sissons managed to leave the water with the first group of swimmers to quickly form a large group who stablished a terrific pace during the first kilometers of the bike course.

First time up the Cuesta de la Vega, the leading pack was of 28 riders, with all the big names on it, trying to keep an eye on each other, and keeping everything under control until lap 3 of the bike course. With less than 20 kms to go, the French squad led by Leo Bergere, Raphael Montoya and Simon Viein opened an small gap, only followed by Stefan Zachaeus (LUX) and Ryan Sissons.

The five of them opened a small break on the last bike lap, 18 seconds, enough to see them first out of T2 and start the tough run course, four laps of 2.5km each, all together, with almost 30 seconds of a difference with the chasing group.

Zachaeus was the first one to fall behind, followed by Bergere a few meters after, with British Marc Austin and Spaniard Serrat Seoane approaching right behind, but the three men on the lead kept the rhythm on the Madrid’ slopes and the gap was bigger with each lap.

On the bell lap, Montoya and Sissons pushed a bit harder to leave Viein a bit behind, and with a final stroke with 500 meters to go, the kiwi managed to get his first ever World Cup victory in Madrid, to showcase a strong start of the season after his 3rd place in 2017 ITU New Plymouth World Cup.

Second place was for Montoya, only 22 years old, and one of the best seasons so far for a Frenchmen, after finishing fourth in the World Cup in Cape Town. He was followed finishing in the Royal Palace by compatriot Simon Viein, who earned his first ever world podium as well in Madrid.