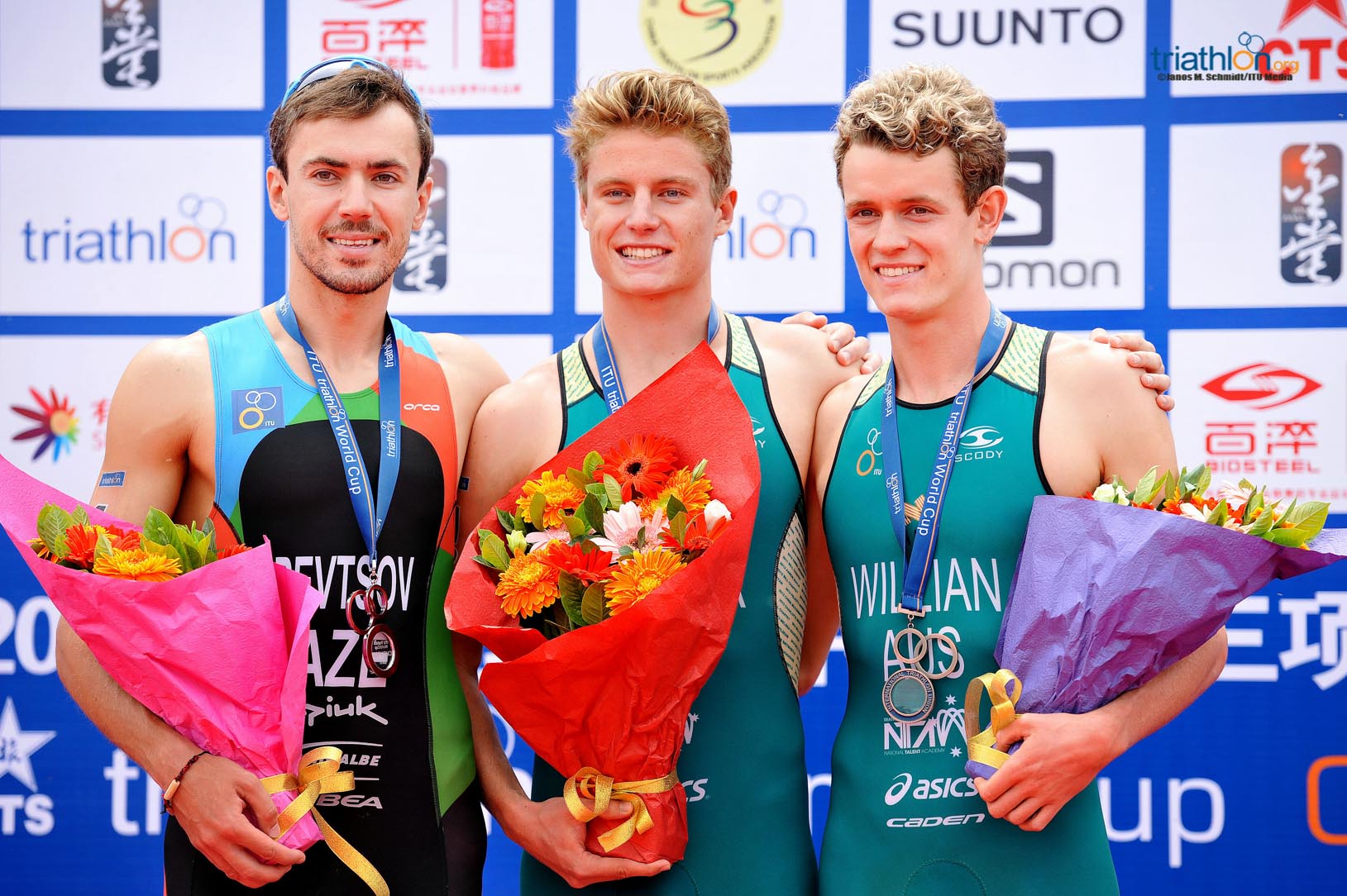 by Chelsea White/ITU Media, all images by Janos Schmidt/triathlon.org

Men’s Recap
Starting his ITU World Cup career off on the right foot, Aussie Matthew Hauser earned the gold medal in his debut WC race at the 2017 Chengdu ITU Triathlon World Cup. Taking sixth place in his semifinal heat the day before, Hauser conquered the super sprint distance on day two of racing to earn the winner takes all prize of standing on his first WC podium.

The silver medal went to Rostislav Pevtsov (AZE), who for the third year in a row took second place at the Chengdu World Cup. The bronze then went to Aussie compatriot Luke Willian who collected his second WC medal this year after winning in Mooloolaba in March.

Right after the race, Hauser said: “I’m absolutely stoked, it was my debut world cup after doing Gold Coast WTS a couple of weeks ago. I’m really pleased with the effort and I’m looking forward to the rest of the year”. “I knew I conserved a lot of energy yesterday in the heats and just did what I could to get to the final. I knew it was always going to be a running race today, so I tried to conserve on the swim and bike and save it for the run and I managed to execute the processes right”, explained. After completing the semifinal sprint course on Saturday, which saw the athletes race a 750-metre swim, 20-kilometre bike and 5-kilometre run, the top nine men from the three heats advanced to the “A” Finals along with the addition of the next three fastest times to make up a 30-man roster to start the race.

Diving into the water to kick start the super sprint course, the men had a quick 400-metre swim before Alois Knabl (AUT) exited the waters first with Richard Varga (SVK) just behind him in second.

The 10-kilometre bike ride deemed unhelpful to separate any frontrunners in the men’s race as the entire field except for one rider cycled together as a mass pack. Hungary’s Gabor Faldum and Bob Haller (LUX) made it out of T2 first, but they were followed by a sea of men behind him.

As the short 2.5-kilometre lap carried on it seems that it would be another photo finish, but Hauser managed to get out in front and avoid the close call and pull off the win. Pevtsov and Willian then followed right behind to finish off the 1-2-3.

“I focused on saving some energy for the run, Chengdu is my lucky race”, said Pevtsov, who also finished on the podium last year. “After just near missing the podium on my last race, I feel great today. Everyone knew that it was going to be all to the running, and that’s what happened”, said William.

Women’s Recap
While she is no stranger to winning, Great Britain’s Non Stanford and former ITU World Triathlon Series World Champion of 2013 has never won a World Cup race in her career, until today. The Brit earned her first career WC gold after surviving two days of racing at the 2017 Chengdu ITU Triathlon World Cup in her first WC race since 2011. Joining Stanford on her first WC podium was Germany’s Laura Lindemann who earned the silver. While she also is a two-time World Champion for U23 and Junior racing, she debuts to the WC podium in Chengdu. Finishing off the medal count is Kirsten Kasper (USA), who returns to the WC podium for the first time since winning in Salinas last year.

“Is always great always to star the season with a win, but I was not confident until the end, because everything was so quick. The key thing today was to have good transitions, and I’m not known for my good transitions, so I just focussed on staying calm and getting out fast”, said Stanford after her victory. “I knew there were a few strong runners on the field today and that it could be a sprint finish, but I was quite confident in my ability and didn’t worry too much, and that helped a lot”, she said.

In the semifinal rounds on Saturday, the top 14 women from each heat qualified for a spot in the “A” Finals, along with the remaining top-two times to complete the 30-women start list.

Gearing up for the super sprint race, the pontoon dive started the short and sweet 400-metre lap. Great Britain’s Jessica Learmonth led in the water and exited to the first transition.

With the majority of the women’s field entering onto the bike leg at the same time, two large groups formed to ride the 10-kilometre course, however they were only separated by less than 200 metres.

The top women remained at the front and made for a swift second transition. China’s Chunyan Xiong got the one up and started the 2.5-kilometre run lap first, but she was quickly bypassed within a matter of seconds by Stanford. Stanford took over the lead and never backed down until she crossed the finish line and ended up with the multi-race format gold.

Lindemann then followed for the silver, despite being passed by Claire Michel (BEL) with one kilometre to go and putting her into fourth place, Lindemann put forth a last chance effort to push past Michel and Kasper who was in second to get the silver. Kasper then carried it home to get the bronze.

After crossing the finish line, Lindemann said that after the two races on a row “was hard on the legs. I thought just on saving some energy because I knew the Final was going to be very hard”. Kasper said: “It was a lot of fun this format, and quite a hard fight today for the podium. The semi final went very well and today I was very focussed on getting on the podium on the final meters”