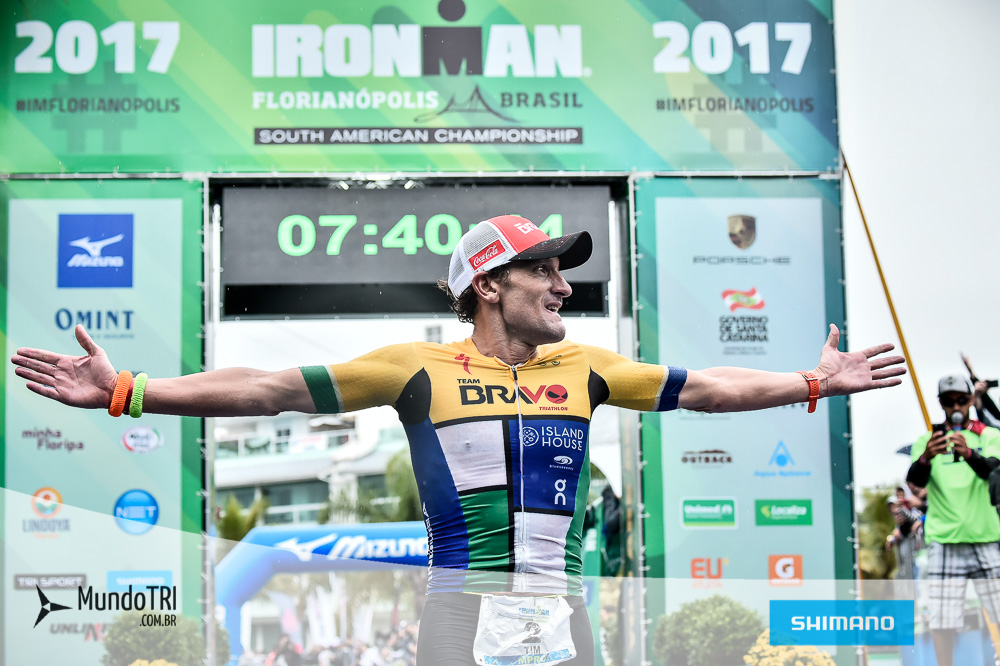 The weather was not the best, with lots of rain at the end of the week in Florianopolis. But the triathlon gods set the mood in the “Island of Magic”, staged for the 17th time, was the best of all years in as far as race conditions. Britons Tim Don and Susie Cheetham were the winners at the end of the glorious day.  Tim not only won as he set the best Ironman time in the world with 7:40min23 – before it was 7:44:29 set by Canadian Lionel Sanders last year in Ironman Arizona. Susie was not behind in breaking records and with 8:52:00, set the best mark for the women’s race in the capital of Santa Catarina.

“It shows that IRONMAN Florianópolis is one of the fastest races on the circuit. Two records in one edition and one incredible achievement. It was a complicated weekend, with a lot of rain, but it ended in the best way. The most traditional test of the country continues to surprise and show its strength, “said Carlos Galvão, CEO of Unlimited Sports, organizer of the event.

Tim Don, runner-up last year, came to this edition to win without giving a chance to opponents. And he did more than that, was always ahead, took a shower and set the world’s best mark for IRONMAN. To further enhance his achievement, the triathlete beat very strong competitors such as Canadian Brent Macmahon and Brazilian Igor Amorelli, champions in 2016 and 2014, respectively.

See also:  Video: How To Ride Safely On The Road | Ridesmart

The race was so dominant for Tim Don, save for a few seconds off the swim leader, it could be said that he won wire-to-wire.  It would not matter  though, even if he fell behind by 4 seconds to Luiz Francisco of Brazil.  His 4:06:56 bike split was so dominant that it gave him a 20:34 lead entering T2.  And he would not coast in the marathon, also registering the race best marathon at 2:44:46.  His dominant effort gave him a 25:20 margin of victory over Kyle Buckingham of South Africa and 26:35 over 3rd-place Igor Amorelli of Brazil.

“When I saw the time I could not believe it. We never think it’s going to break the world record. Brazil is a special place for me, I have already won other events here and now all this happening. I am very happy with my result. I switched trainer in cycling and I trained a lot to come here and get a good result. I knew I was fine, but I did not expect the weather to be this, “said the champion.

Even with the British contingent, the Brazilians did not make it ugly, with Igor in third, Reinaldo Colucci in fourth, his return after seven years, and Thiago Vinhal in fifth. Igor and Thiago secured qualification for the final of the IRONMAN World Tour, Kona, Hawaii in October.

“I’m happy with my result, but I think the weather could have been a little better. Third place at home was very good because I got good points in the ranking for Kona. Now is to resume the training, adjust what you can adjust. The focus for the second half will be the Worlds in Hawaii, so I must do some 70.3 tests from now on ”

In the women’s elite category,  the fight was closer. Haley Chura was the fastest in swimming and held on to the going into T2 but not by much.  At about the 23km mark, Cheetham made the pass and was also eventually overtaken by the German Sonja Tajsch. The British athlete also broke the women’s record, lowering in almost two minutes the old record in Florianopolis.

“This was my first time in Brazil and winning with a record is always very good. I did not know it was in record time until they told me the way I was around and I had to run as hard as I could in the last kilometer. And that’s what I did. I was very happy with the result and now with the vacancy in Kona guaranteed I hope to do a good race there, “Susie said.