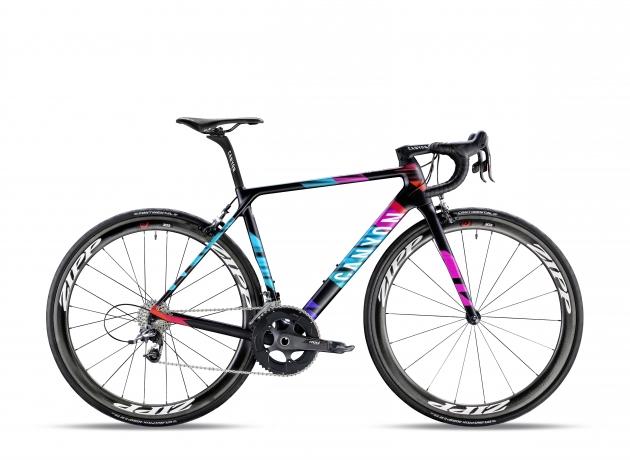 It’s that time of year when we cast our eye over those skinny road racing folk and the shiny bikes they ride. While most of us will never own a pro-level race bike, they’re great to drool over and here is what we think are five of the most interesting for 2017.

French Team AG2R La Mondiale has changed from Focus to Factor bikes for 2017. The eagle-eyed among you might notice the team is not riding Factor’s more radical 01 model, with its unique split downtube, instead riding the 02. This has a more traditional look and an ultra-low frame weight of 740g. Combined with Mavic’s Cosmic Carbon Ultimate wheels, we suspect AG2R’s mechanics will have to add weight to the bike to ensure it stays over the UCI’s 6.8kg weight limit.

Pinarello’s latest, and allegedly greatest, race bike was first used at the 2017 Tour Down Under, between the legs of those marginal gaining boys in black, Team Sky. Pinarello considers the F10 to be an evolution rather than a revolution, so, on the surface, it doesn’t look too different. But that hasn’t stopped it hitting all the usual marketing buzz words by way of increased stiffness, reduced weight and lower aerodynamic drag. Marketing claims aside, it’s a fast looking bike we’re sure to be seeing a lot more of in 2017.

A new name in racing, the snappily named UAE Abu Dhabi Team will be riding Colnago bikes for 2017. The C60 gets its unique look from carbon tubes, which are then bonded into lugs, apparently making for a stiffer frame. Everything else on the bike is fittingly Italian, with Campagnolo groupset and wheels, Deda finishing kit, Vittoria tyres and a Selle Italia saddle. In fact, the only part that doesn’t have Italian heritage seems to be the Look Keo Blade pedals that don’t detract in any way from this tasty looking bike.

Pros have been racing the latest Specialized Venge for a while, but what they haven’t been racing, until now, is a Venge ViAS with discs. It seems Specialized wants to see more riders on disc bikes, so have provided Tom Boonen, Marcel Kittel and Peter Sagan with just that. Boonen has already managed to clock a victory aboard the Venge ViAS Disc and with no ‘spinning knife’ injuries to report. This custom model was shown, although not raced, at the Tour Down Under by Peter Sagan. We suspect this could change for the Classics and we might see Sagan racing discs on the cobbles.

Is this the best looking bike in the pro peloton? We think so. Canyon-SRAM will be racing — and we suspect winning — aboard Canyon’s flagship Ultimate and Aeroad models in 2017. Team mechanics will be delighted to see wireless SRAM eTap fitted as standard, making servicing much quicker, easier and less frequent. Combined with Zipp wheels, Continental tyres and Canyon’s slippery one-piece bar and stem, the Canyon-SRAM riders have some of the best kit at their disposal for a tough season of racing.