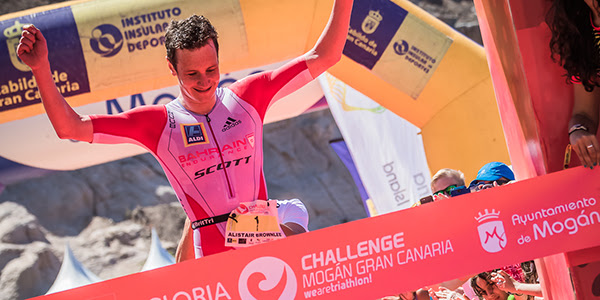 The winners of the medium distance 2017 Gloria Challenge Mogán Gran Canaria have been crowned, with Alistair Brownlee and Emma Pallant setting high standards ahead of what is expected to be a competitive season of Challenge Family races worldwide.

Hundreds of triathlon enthusiasts from 24 nations – almost double the entries of last year’s inaugural event – lined up along the impressive Amadores beach at 8am this morning for the start of the middle distance race (1.9km swim, 90km cycle, 21km run) in the stunning city of Mogán. Excitement was at an all-time high amongst the triathletes as well as the spectators, who gathered in their hundreds to witness Alistair and Emma take the first-place victories in the men’s and women’s races.

“There seems to be so much electricity around Gloria Challenge Mogán Gran Canaria this year, and it has been absolutely incredible to see so many triathletes from all over to world taking part,” said race organiser Jordi González. “It’s no secret that here in Gran Canaria we value the unmatched infrastructure, subtropical climate and exceptional conditions that make it an ideal playground for all triathlete enthusiasts of all abilities.”

Designed to capture the spectacular coast of Mogán, each part of the Gloria Challenge Mogán Gran Canaria course is unique, varied and technical, which today provided a fair race for all with a slight northerly breeze with temperatures averaging 22°C with not a cloud in the sky.

Women’s Pro category
The current Kona world champion, Daniela Ryf (SWI), led the majority of the race after taking the lead on the bike, with Lucy Charles (GBR) hot on her tail. But it was Emma Pallant (GBR), who valiantly fought her way up from third on the run, who crossed the line first. Emma completed the course in a time of 04:35:15, knocking seven minutes and 15 seconds off last year’s women’s race – setting a new course record.

Men’s Pro category
Ahead of the event, there was much anticipation ahead of the Double Olympic and two-time ITU Triathlon World Series champion Alistair Brownlee’s (GBR) race, marking his new involvement in competitive longer distance triathlon.

Alistair extended the gap from David Giardini and Pieter Heemeryck on the bike and won the pro men’s race after a strong run in a time of 04:03:09, stripping 10 minutes and 35 seconds off the course record.

Commenting on his first longer distance race, Alistair said: “This is my first attempt at a middle distance race and there is a lot to learn. I chose Gloria Challenge Mogán Gran Canaria as my first middle-distance race because I really like what Challenge Family is about and considering we are coming into the summer race season the timing is perfect.”

The second Gloria Challenge Mogán Gran Canaria marks the start of the European longer distance triathlon calendar series. Commenting on the worldwide growth of Challenge Family, CEO Zibi Szlufcik said: “We are immensely proud that we are able to host competitions for triathletes of all abilities to enjoy. Thanks to our rapid growth, we have been able to continue adding new remarkable venues to our calendar, such as Gran Canaria last year. This, along with exceptional organisation from our race organisers, attracts pros, age-groupers, amateurs and everyone in between to sign up to Challenge Family races.”