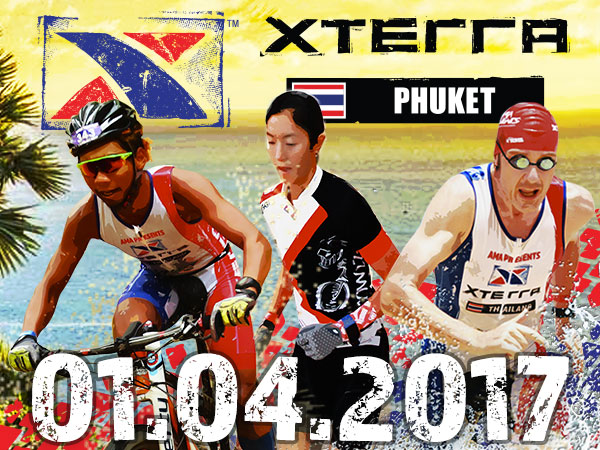 The tropical island of Phuket is set to host it’s first XTerra Off-Road Triathlon this April 1.  Phuket, known as one of Thailand’s top tourist destination, has also become one of Asia’s top triathlon hosts, being the venue for international races like Ironman 70.3 Thailand and Laguna Phuket Triathlon.  XTerra Phuket is part of the XTerra World Tour and is the second stop of the 2017 XTerra Asia-Pacific Tour.  It will feature a 1.5K swim in the ocean of Layan Beach, with 30K of mountain biking and 10K of trail running in a ‘stunning jungle/forest setting’.

In an interview with triathlonbusiness.com, Race Director Serge Henkens,  an experienced event producer with a passion for off-road racing and the great outdoors said: “It’s a tough course and a true jungle experience,”   “Competitors can expect a hilly, rolling course, hot weather, and a spectacular swim in crystal clear water that starts from a pristine beach.” With a total Pro purse of US$7,500, . Reigning Asia-Pacific Tour champion Ben Allen (AUS) is scheduled to compete, alongside his perennial APAC Tour rival Bradley Weiss from South Africa, up and comer Kieran McPherson from New Zealand and David Escobar Ballesteros of Spain, who won the XTERRA test event in Koh Samui last September.  Ballesteros considers this as his home training turf as he works as a coach in Thanyapura sports center in Phuket.

Highlighting the women’s elite field is the reigning XTERRA Malaysia Champion Jacqui Slack of Great Britain, and the ‘Swiss Miss’ Renata Bucher, who will be looking to add another title to her string of 33 career championship wins.

Also at stake is age group slots to the XTERRA World Championship on Maui, and points in the Asia-Pacific Tour.