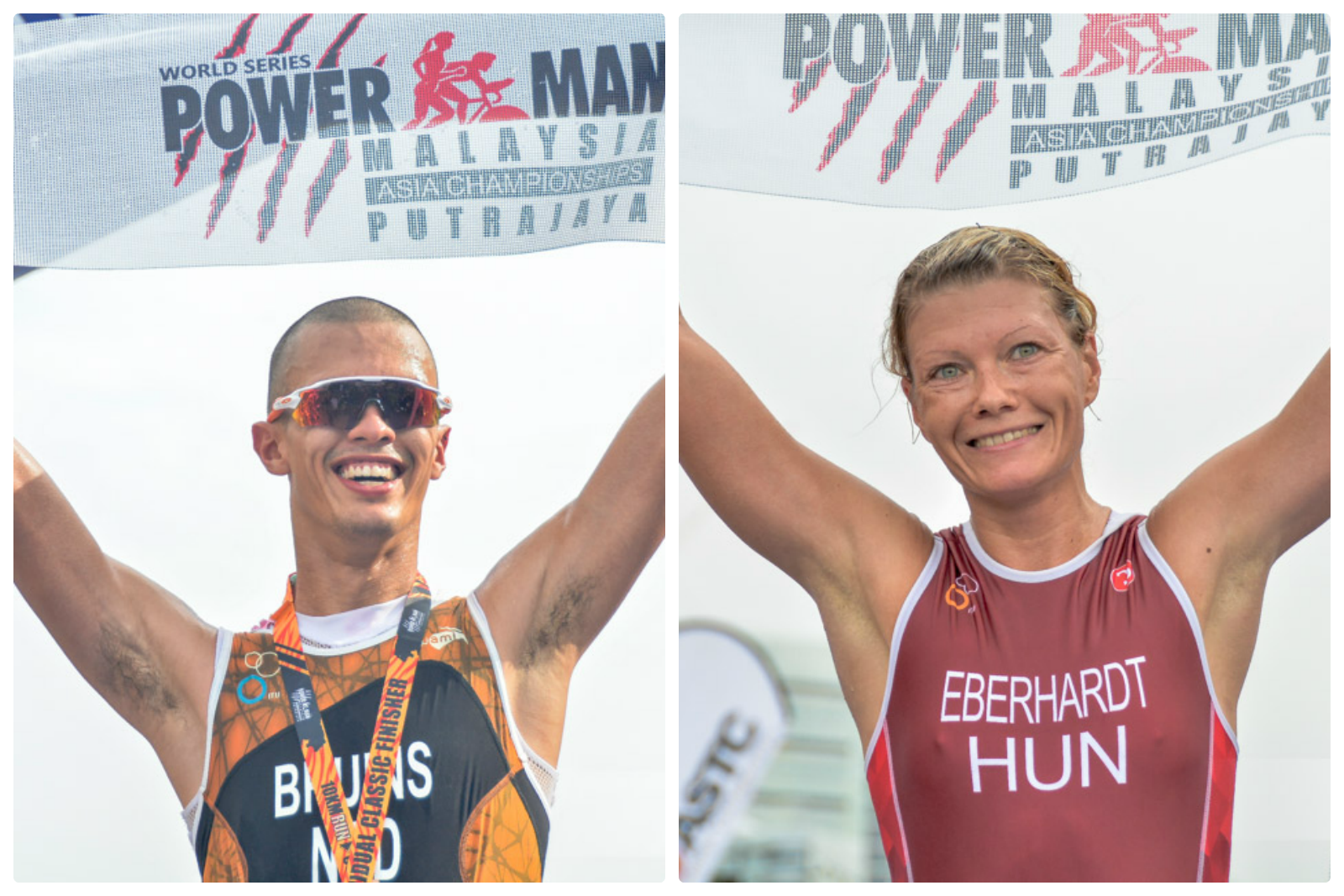 The highly anticipated Powerman Asia Duathlon Championships – Malaysia 2017 started with over 3,300 registered duathletes taking on the run-bike-run course across Putrajaya. In the end, it was Thomas Bruins from The Netherlands and Annamaria Eberhardt-Halas from Hungary that completed the race in 02:33:57 and 02:52:05 for the male and female elite respectively. This will be Bruins’ third win in the Powerman series this year after securing his title in the inaugural Powerman Thailand and Powerman Indonesia.

“After today’s race, I will be taking a month break and continue with my preparations for the 2017 Zofingen ITU Powerman Long Distance Duathlon World Championships in Switzerland,” said Bruins. While commenting on today’s race, he added that “numerous long straights made the race highly competitive. With light rain that throughout the race that cools the environment, athletes were highly competitive. I will return again to compete in this edition next year.” “This can possibly be my fastest race among the five Powerman Malaysia edition I have participated. It was challenging due to the weather, but I was really pleased with my result,” mentioned Jason. He came in eighth in last year’s Powerman Asia Duathlon Championships – Malaysia edition. “Powerman Malaysia provides the ideal platform for Asian athletes to showcase their skills on an international stage. With the rapid growth of the race, this gives it an opportunity to explore more talents in the region. With the possible addition of more categories for Powerkids and the introduction of PowerYouth in the coming years, we predict that the interest towards the sport will continue to surge,” said John Raadschelders, President of International Powerman Association.

Powerman, the premier label for long-distance duathlon in the world, established its presence in Malaysia since 2002. Last year, its Malaysia edition was conferred as the ‘Largest Participation in a Duathlon Championship’ by the Malaysia Book of Records and was acknowledged as the world’s largest duathlon in a Powerman series by the International Powerman Association.

“The rapidly increasing interest in multi-sport is the primary catalysts for Powerman’s proliferation in Malaysia. We hope to expand our programme and cater to a wider audience next year. The addition of Powerkids in this year’s edition was a great success, and we will expect more to participate in 2018,” said Barbara Lam, Managing Director of E-Plus Entertainment Productions (M) Sdn Bhd.

200 children aged from 5 to 12 years old took part at the inaugural Powerkids yesterday. The grassroots programme initiated by the organiser, E-Plus Global Sdn Bhd, aim to nurture and develop more multi-sport athletes in the country.

“It was a competitive race this year in every category. Participants are well prepared to compete for the title, and this is a positive impact of an international race. We foresee that more will follow suit and pick up the skills to be a professional duathlete,” said Iskandar Shahril, Race Director for Powerman Asia Duathlon Championships – Malaysia 2017.

He added that the Asia Championship race would return to Putrajaya on Saturday, and Sunday, 3 and 4 March 2018.