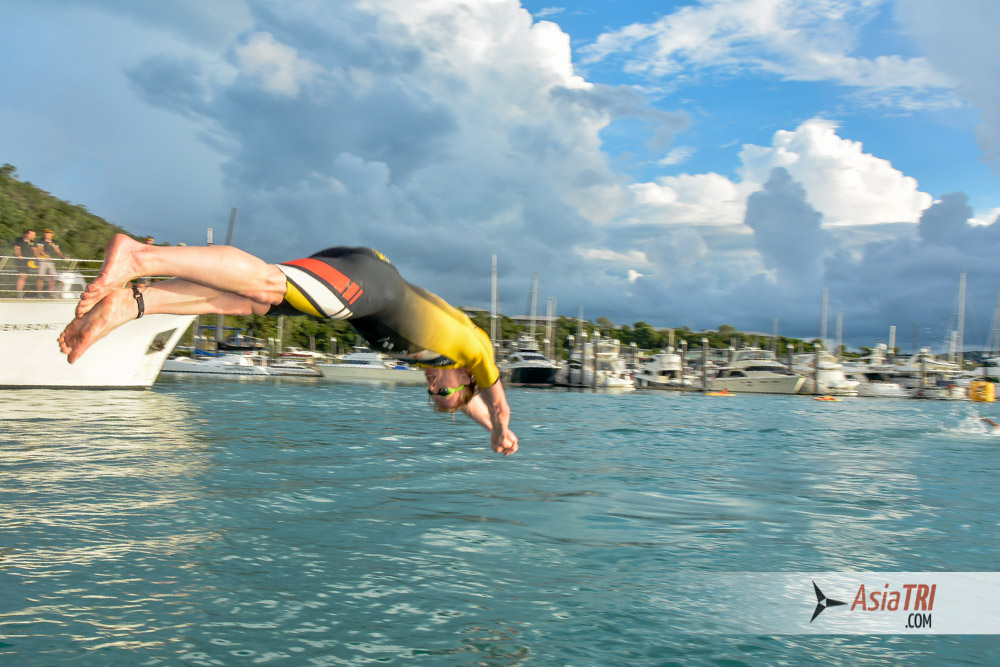 Richard Murray once again ran to the win on Day 2 of Super League Hamilton Island, not only taking the Stage 2 win of the Equalizer format but also retaining overall leader standing in the field of 24 competitors.

The Equalizer is the second featured format in Super League Triathlon’s inaugural event. It is a two-stage race comprising an individual cycling time trial in Stage 1 in the morning, and a swim-run-swim-bike-run sequence as Stage 2 in the afternoon. Athletes are released onto the course in a pursuit format, with gaps between each athlete corresponding to the time lost to the Stage 1 winner. The South African racing in the number 07 jersey started the afternoon with a 20-second deficit to Cameron Dye (#08), who had been fastest cyclist in the morning’s individual time trial.

The first swim belonged to Australian Jake Birtwhistle (#44), who overhauled his deficit to Dye and took control on the first run. Fellow Australian Ryan Fisher (#10) attacked out of the water to hang onto Birtwhistle’s shoulder. Murray emerged from the water in eighth place.

The two Aussies pushed the pace to drop Dye, while Murray picked up the pace with his chase group to bridge the gap. Eventually at the end of the first run the athletes formed a large lead group, and Javier Gomez (#01) took the front going into the run-to-swim transition. Kristian Blummenfelt (#02) led into the water for the second swim, but Igor Polyanskiy (#11) showed his swim prowess, churning through to head into swim-to-bike transition first. His strong swim created a gap large enough to eliminate Brent McMahon (#83), Terenzo Bozzone (#13), and Siggy Ragnarsson (#57) as the three were unable to mount their bikes within a minute after Polyanskiy had headed onto the cycle course.

“Unfortunately, the time difference this morning was too big to bridge,” said Ragnarsson. “The guys out front were putting on a really strong pace. I was hoping I could maybe catch up, at least get on the bike and finish the bike course, but it is how it is.”

Ryan Bailie (#39) attacked up Mango Tree Hill into the second lap of the bike leg, with Gomez going with him into the front. Gomez attempted to press the pace but on Lap 5, it was Bailie and Birtwhistle who went on the offensive this time up the hill. Their joint effort was enough to build more than a ten-second gap into the bike-to-run transition.

Murray stayed right inside the chase group and hit the run in third place. Again he chased down the race leaders, but this time asserted his ownership of the run right in Lap 1, overtaking Birtwhistle for first place. The blistering speed from the man who owns the triathlon 10-kilometer run record was enough to lap Josh Amberger (#27), Dmitri Polyansky (#77), Crisanto Grajales Valencia (#06), Dye, Dan Hoy (#22), and Alessandro Fabian (#88). Birtwhistle’s second place went unchallenged, but Mario Mola (#03) pipped Gomez to be the first Spaniard across the finish line.

Murray’s win gives him another 20 points to add to his initial 20 points from yesterday to give him a clear overall lead. Mola moves up the leaderboard to second overall, while Richard Varga (#12) has been relegated to third.

“It was not easy,” said Murray. “That was hard, man. Each day is getting harder and harder, and Bailie and Birtwhistle, those kids can run. Give it to them. They can swim as well! I’m very stoked, but I’m going to pay tomorrow for sure.”

See also:  Triathlon to take the stage at the 2018 Asian Games

Murray said he turned on the gas after overtaking the two Aussies to break them psychologically. He went so hard that he had difficulty remembering how many laps he had left to run. “Two kilometers is really long after the last few days. It wasn’t as hot as yesterday, but it was definitely hard out there.”

While Alistair Brownlee (#23) managed to stay in contact throughout Stage 2 of the Equalizer, he was not able to gain any traction on the leaderboard, staying in 19th place.