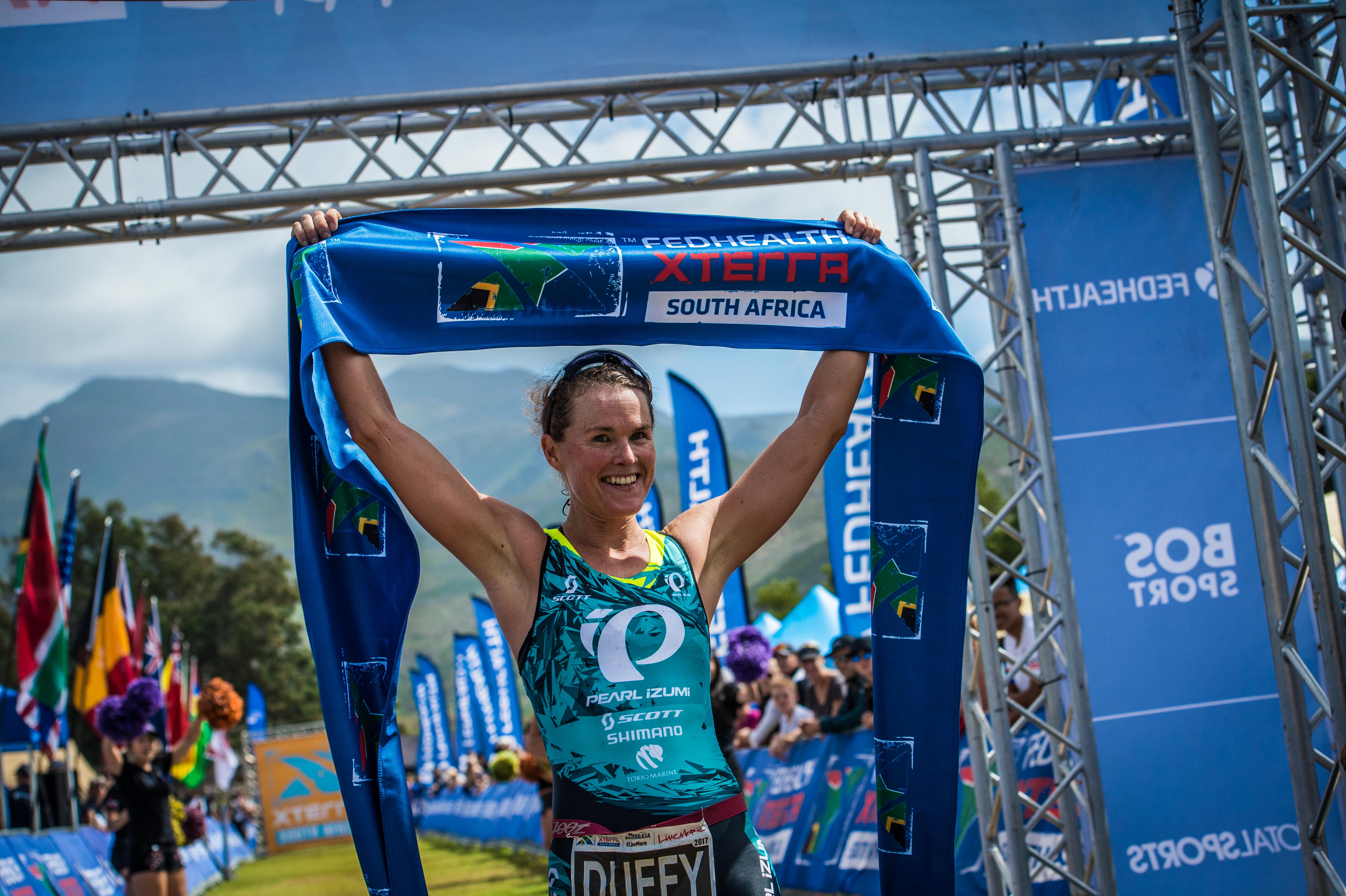 Olympians Richard Murray and Flora Duffy captured the 14th annual Fedhealth XTERRA South Africa Championship on a magnificent Saturday morning at the Grabouw Country Club, which sits on the edge of the Hottentots Holland Nature Reserve in the Elgin Valley about an hour’s drive from Cape Town.

It’s the second XTERRA SA title for Murray, who won his first in 2013, and the fourth straight for Duffy, who has won 11 consecutive XTERRA majors and 15-of-18 since her off-road debut in 2013.

In the men’s race Murray, who placed 4th at the Rio Olympics last summer, needed every bit of his world-class endurance and speed to hold off the reigning SA Champ Bradley Weiss.  He completed the 1.5km swim, 26km mountain bike, and 12.5km trail run in a lightning fast time of 2:22:46, just 19-seconds ahead of Weiss.

“Bradley seriously gave me a proper run for my money,” said Murray, who took the lead out of the water but quickly had company on the bike.  “He caught me in the first 6km, and four years ago here it took Conrad 12km to catch me, so I was very worried.  From there it was literally a cat-and-mouse game the whole event.”

Weiss, who won all three races in the FedHealth XTERRA South Africa series last year and the first one he entered this season at Nelson Mandela Bay two weeks ago, was 20-seconds back of Murray out of the swim and in a good spot on the bike before bad luck slowed him down.

“I caught Richard at the top of the first climb, but then both my tires suffered a slow puncture,” said Weiss.  “I only had one bomb, but managed to sort out both tires.  I caught Richard again just before the rock garden and going into the run I had about a one-minute lead, but knew that with Richard I needed at least two minutes.”

Murray added, “Bradley punctured at about the 10km mark, but caught me again at about the 18km mark.  Going into the run I thought I’d catch him sooner than I did.  He is really quick on the up-hills.  I’d catch him, only to have him pull away on the hills.  I caught him again on the last climb and pushed really hard on the downhill to get away.  I must give massive credit to Bradley.  He has come a long way and would more than likely have beaten me today had he not punctured on the mountain bike.”

It was indeed an impressive day for Weiss, who fractured his scaphoid bone during a training ride in December and just recently returned to full training.

“XTERRA is an amazing event.  It’s well organized and the athletes are treated really well,” said Murray, who has made no secret of his ambition to win the XTERRA World Championship in Maui this October.

In the women’s race Duffy did what she does best … dominate.  Her winning time of 2:39:00 was more than six-minutes faster than runner-up and SA Olympian Mari Rabie.

“Being the first race of the season, you don’t really know where you’re at,” says Duffy.  “I was a little nervous, but everything went well and I had a lot of fun.   I had a good swim, sticking to Mari’s feet.  On the bike I worked hard on the climb, and went smoothly on the technical sections.  I’m currently nursing a hip injury, so on the run I decided to practise more control.  XTERRA Grabouw is always special.  It’s where I started.  I’m very happy with my fourth victory.”

Rabie, a two-time SA Champ (she won her first XTERRA title back in 2005), may be “retired” but is still one of the fastest female triathletes alive.

“I’m absolutely delighted to come second today,” says Rabie.  “I enjoy XTERRA because it’s tough and rocky.   I was actually in competition with my boyfriend.  We’ve both just retired from racing, and this was his first triathlon.  He actually beat me, so I guess he takes the XTERRA crown.”

Making her XTERRA debut on the day, Rachel Klamer from the Netherlands rounded off the podium in the women’s race.