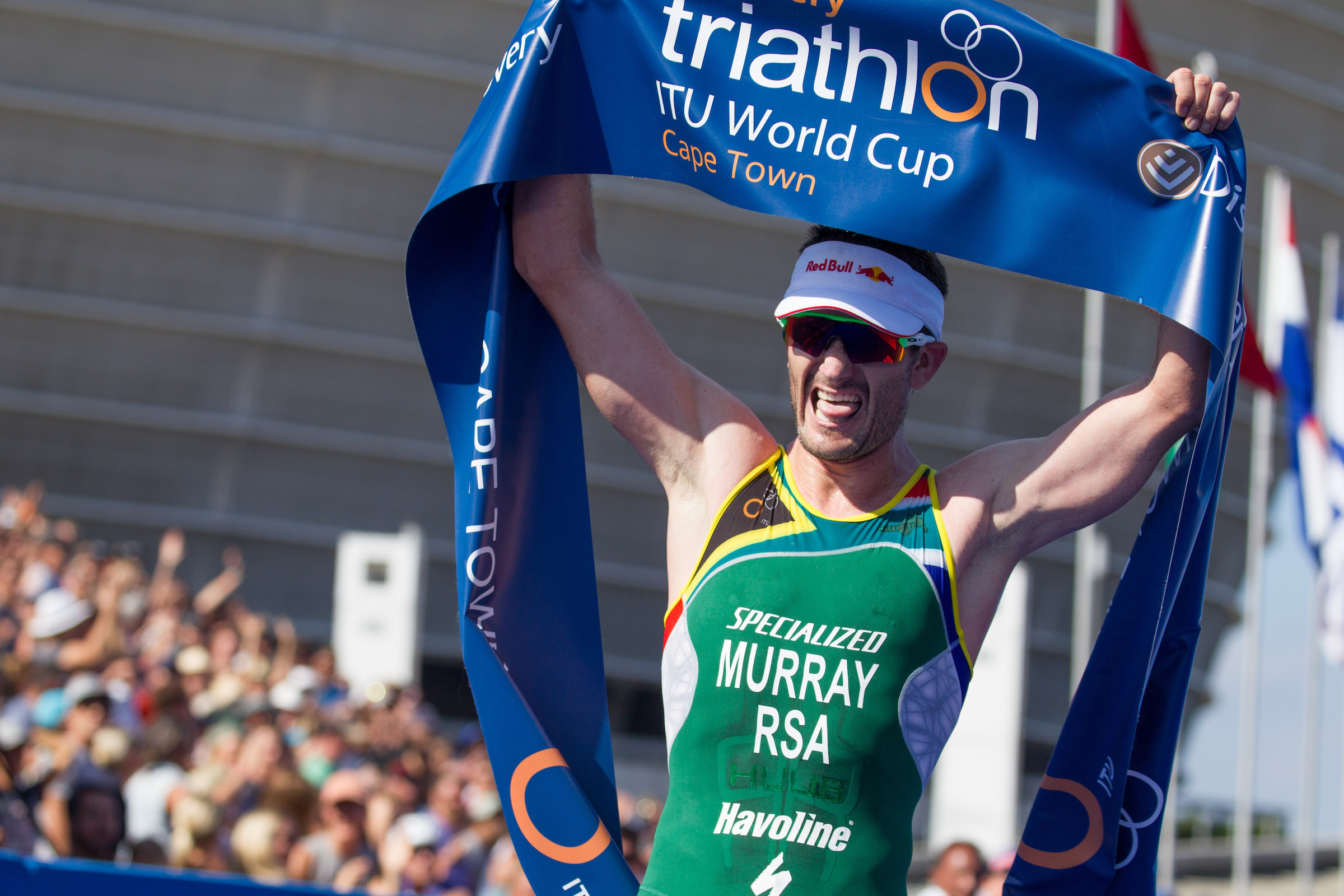 A first ever for the sport of triathlon in South Africa; that is what happened – in a nutshell – on Saturday when Richard Murray, Henri Schoeman and Wian Süllwald took the top three spots at the Cape Town Triathlon ITU World Cup. On the women’s side, Great Britain’s Lucy Hall won her first ever ITU World Cup race on an amazing sprint finish against her training partner Jessica Learmonth.

It was the opening race of the 2017 ITU World Cup season and it could not have got better for the locals. Murray won in 51 minutes and 33 seconds followed by Schoeman on his heels 8 seconds later and Sullwald in 51.56.

Murray has declared that he has always wanted to win on home soil in Cape Town since the city hosted its first WTS in 2014. On Saturday he got his chance on the World Cup platform, but Murray made it very tense for himself and the fans. He got a time penalty for dropping his helmet outside the box in transition two.

It was a big leading group coming out of the swim and it stayed that way on the bike leg. Running out of transition 2 Murray took the lead and Schoeman pushed hard to follow. Murray gave his all to build a lead on the run having that penalty in mind.

“Third time’s a charm they say! Finally got it today. When I heard about that penalty though… I thought it was a 15 second penalty and I knew the gap to Henri was not that big, so I was pressed. That was the hardest I pushed myself in the first race of the season ever! So happy though to finally get the win in Cape Town,” said a very happy, very relieved Murray.

See also:  What to Look Forward to in the 2018 World Cup Season

“I’m happy with my race. The form is good. I made that one mistake going out on the run when I pushed too hard to follow Richard. I went in the red a bit too early so I could not push harder at the end when Richard served his penalty. I thought I might have a chance, but my legs were feeling like lead at that stage,” said Schoeman.

All three athletes mentioned the impact of an all South African podium. “It is a fantastic day for us. I am happy we could have done it for our country and sport,” said Schoeman.

Murray added: “It could not have been a better day out in Cape Town. I very happy for Wian seeing that he is coming back after being injured. I hope this will help grow the sport even more.”

It was the first race of the new season and nobody was sure what to expect. Hall won the sprint race in 59 minutes and 34 seconds. Learmonth was second in 59.35 and Japan’s Ai Ueda took the last spot on the winner’s podium with a time of 1 hour and four seconds.

Hall and Learmonth got out of the water together and it stayed that way until the finish. Rachel Klamer from Holland challenged when she attacked on the bike leg of the race and she tried hard on the run, but could not bridge the gap on her own. Ueda did manage passed Klamer on the run.

Hall and Learmonth reached the blue carpet at the same time and it was there that the sprint started. “We decided during the run that we would start sprinting once we reach the blue carpet and just to go for it and what happens, happen,” said Learmonth.

“The plan was to use Cape Town as part of our training and have a bit of fun! We wanted to test some training tactics as well and it did work, but triathlon is very unpredictable and there are so many variables…so when it all works out it is just wonderful!” said Hall.

On her first World Cup win she added: “It is amazing. I’m turning 25 next week and I always said that if I can get a World Cup podium before I am 25 then I will be happy.”

Ueda could not hide her satisfaction with her podium place. “My favorite discipline is running and the weather was perfect today. I’m just so happy that I got on the podium again.”

The World Cup circuit returned to South Africa after Richard’s Bay hosted a competition from 2006-2008. Cape Town is no stranger to ITU events after hosting World Triathlon Series races from 2014-2016. This was the first time though that the picturesque and coastal city will host a World Cup.

Winners of the Free Entry to DurianMan Triathlon (OD) Announced