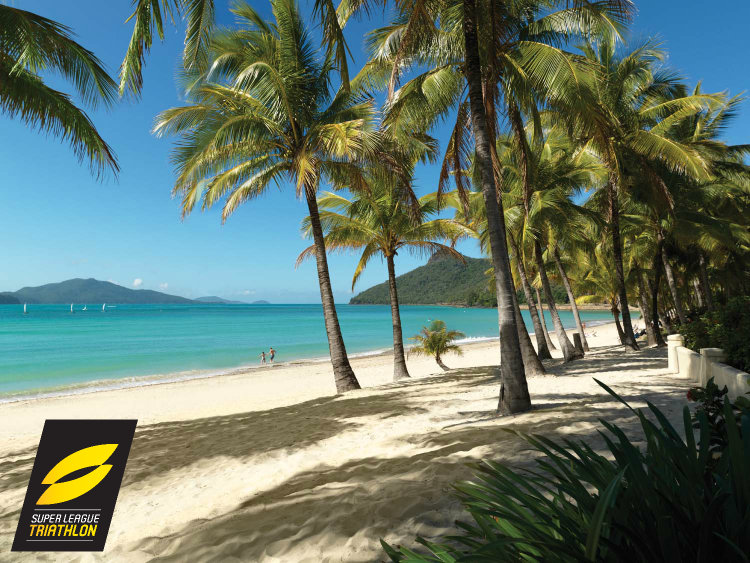 Triathlon is a destination sport, with thousands of athletes descending upon exotic locations all around the world in search of novel sights and experiences while engaging in one of the most grueling endeavors known to humanity. It only stands to reason that taking triathlon as a sport to the next level should involve high-speed, high-stakes racing among the world’s best athletes in one of the world’s most beautiful, idyllic locations.

The game-changing Super League Triathlon series will hold its inaugural event on Hamilton Island, Australia from 17 to 19 March 2017. With 25 superstar athletes pitted against each other across short-course formats aired live worldwide, Hamilton Island provides a stunning setting and lends its own unique climate and topography to the challenge of determining who is the world’s best multisport athlete.
Situated on the Great Barrier Reef in tropical latitudes with pristine white sand beaches, calm clear waters, and an abundance of marine life, Hamilton Island is one of Australia’s most spectacular and sought-after holiday destinations. While resorts provide modern creature comforts and recreation and its airport services daily direct commercial flights from Australia’s major eastern cities, over 70 percent of the island has been carefully preserved in its natural state.

Sporting events on Hamilton Island are known for pushing their competitors to the hilt while wowing them with awe-inspiring natural beauty.

“Hamilton Island has a strong reputation for hosting a number of internationally renowned sporting and cultural events,” said Glenn Bourke, Hamilton Island CEO. “We are proud to add the Super League Triathlon to our schedule of high-profile events and look forward to showcasing the Island to some of the world’s best triathletes. With Hamilton Island being located in the heart of the Great Barrier Reef, the triathletes competing at this game-changing event will be able to enjoy one of the most pristine locations in the world while pushing themselves to their limits.”

Super League Triathlon co-founder Chris McCormack conducted extensive reconnaissance on the island to lay out the 300-metre swim, six-kilometre cycle course, and two-kilometre run course to be used during the three-day Super League event, which will be open and free to watch for all island guests as well as broadcast live worldwide on television and streaming video.

“We’re bringing the world’s best athletes to Hamilton Island. It’s a tropical paradise but we’re going to break them here. This course is brutal,” said McCormack.

The courses have been designed to be spectator-friendly with multiple laps allowing many chances for people to watch the action unfold before their eyes.

The swim course is in the crystal blue waters of the Hamilton Island Marina with athletes surrounded by multi-million-dollar water craft. The cycle course involves six rounds of a one-kilometre loop utilizing Resort Drive and Marina Drive. The run course goes the opposite direction with four laps along the marina foreshore on Front Street. It is truly one of the most spectacular triathlon courses in history.

A separate bike course will be used exclusively for the Equalizer individual time trial. Athletes will roll off the start ramp on the tarmac of the Hamilton Island airport and complete the first out and back section on the flat of the airstrip. But then it’s all uphill. The brutal climb will become the stuff of legend as athletes fight to make it to the top at One Tree Hill, the highest point on Hamilton Island. In the last 1.4 kilometres, athletes will gain 121 metres in elevation with a maximum gradient of 24.4 percent.

“The time trial course may be only six kilometres, but the last kilometres are as tough as I’ve seen in triathlon,” McCormack said. “It may be one of the prettiest finish lines I’ve ever seen at a sporting event, but you’ve got to work your backside off to get there.”

While the competition will put athletes through the wringer, outside of racing they will get to kick back and enjoy Hamilton Island’s natural landscapes, calm turquoise waters, secluded beaches, beautiful weather and luxurious recreation and accommodation. They can take a cruise to the Great Barrier Reef or nearby Whitehaven Beach, set sail through the Whitsundays, play a round of golf at the Hamilton Island golf course located on nearby Dent Island, or relax at a spa or by one of the many pools.