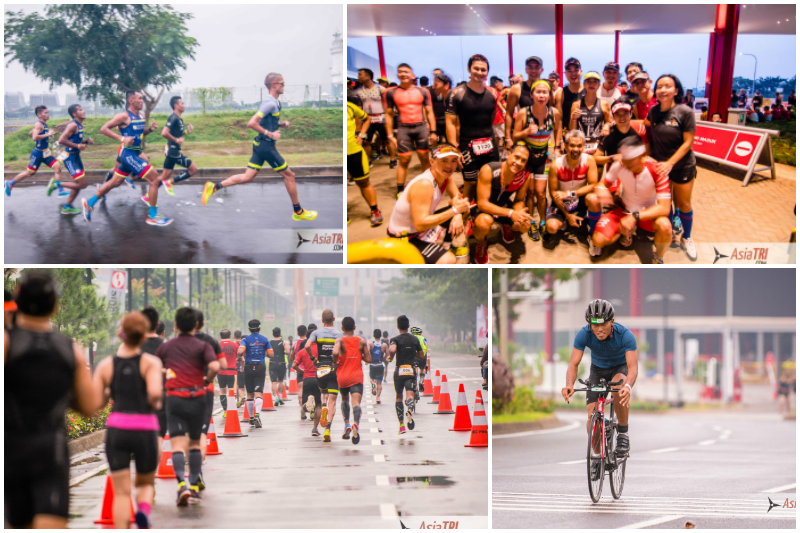 The inaugural Powerman Indonesia took place in BSD City (Bumi Serpong Damai) located in the Tangerang district of the greater Jakarta region.  With the event tagged as Powerman World Series, the same with Powerman Philippines and Powerman Thailand, it features similar distance category such as the classic (10km run-60km bike-10km run) and the short (5km run-30km bike-5km run). It is important to note that Powerman Indonesia is being organized by E-Plus event management team, the same group that organizes Powerman Thailand and the incoming Powerman Malaysia (soon to hit 3,200 participants).  This event in Indonesia was announced and opened to registration four months ago, and surprisingly did well, hitting over a thousand duathletes on its inaugural edition.

The start and finish line is nestled right inside a mall, QBig Mall’s quadrangle area.  The run course is fairly simple, and is al- flat and easy.   After the start, the duathletes will do a 5km counter-clockwise loop around the BSD city street, with the route resembling an inverted P loop.  The course is not entirely closed to traffic, but with the BSD City mainly a privately-developed planned community, vehicles are safely controlled.    The classic category will do 2-loops, and the short 1 loop.   The end of the run will take the duathletes to the east-side parking area where the transition awaits. Regarding the weather conditions, a typical February weather in Jakarta is not the hottest season in the calendar, but can be humid even in overcast conditions.  Race day though coincided with rainshowers, and it somehow added some difficulty in the course especially on the bike course. The bike course is exclusively confined within BSD city, an area that was developed starting in the lates 80s to serve as an upscale community for the upper middle class.  As with a planned urban zone, the course featured a lot of turns and u-turns to get the required 15km (x 2) loop for the short category, and the 20km (x3) loop for the longer classic category. The course profile is flat to modest false flats, and should be easy to manage.  The most difficult part the participants had to encounter was the presence of numerous speed bumps, from one big hump, to multiple small bumps, at least when approaching intersections.  The course would have been faster too if not for the rain, since most athletes preferred to ride it safe with slippery conditions.

Again, the organizers and marshalls were able to control the flow of minimal vehicular traffic, making it relatively safe for the racing duathletes.

How to Get There and What to do

BSD City is a 40-minute trip from Jakarta airport, Soekarno-Hatta.  It is the main airport serving the greater Jakarta area.   Flights coming from neighboring southeast asian countries would be no problem.   The freeway on the way to BSD is relatively smooth and traffic-free.   Taxi service from the airport are always available, just be ready to change currency at the airport to have enough change to pay exact fare.  There are boutique hotels within BSD City that will serve most participants needs.  Transfer from hotel to QBig for the race central ain’t no problem either as taxis ply the route.   If you have a family in tow, there are malls nestled in the area.  QBig Mall is right at the heart of BSD City and is a relatively new mall, so some stalls are yet to open.    The other mall is Aeon Mall, a more upscale version, and is only a few minute drive from QBig.  If you want more things to do within Tangerang area, there are nature parks and theme park to go to (Scientia Square Park and City Raya World of Wonders Park).

Video: How To Fit Clip-On Aero Bars – Make Your Road Bike Into A Time Trial Machine