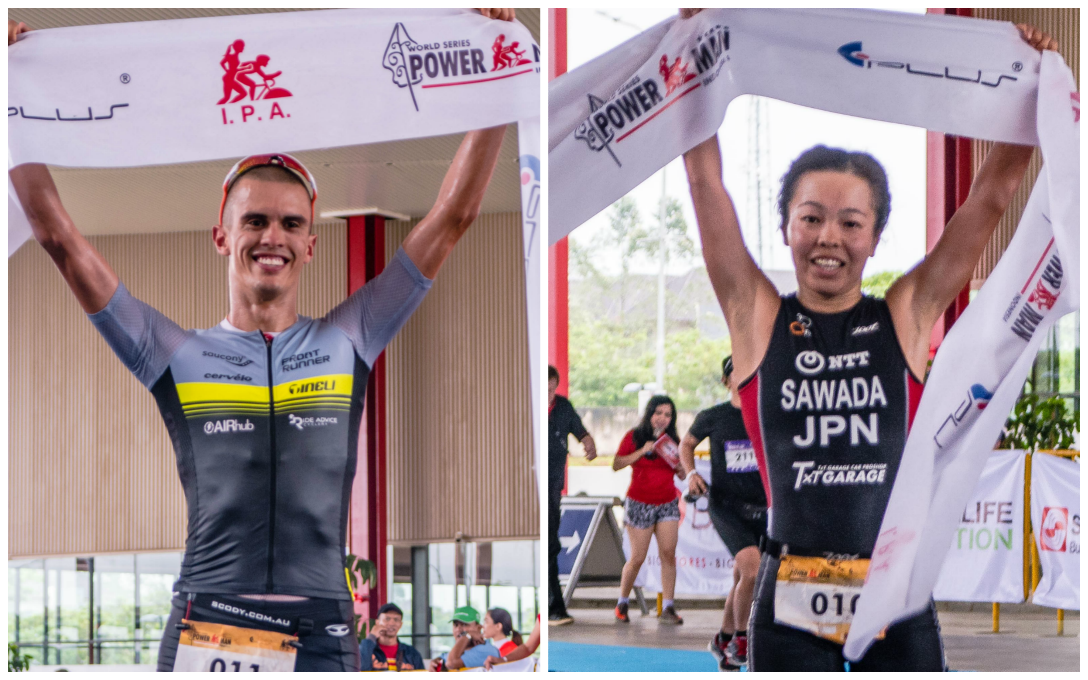 Thomas Bruins (NED) and Airi Sawada (JAP) won their respective elite categories in the inaugural Powerman Indonesia amidst rainshowers and wetroads in BSD City, Indonesia last Sunday February 19th.  More than 1200 participants joined the event that was only announced four months ago.

In what was supposed to be a humid day in Indonesia, the weather surprised with rainshowers throughout the race.  Thomas Bruins of the Netherlands was the definite favorite pre-race, and proved his dominance by displaying his prowess in the bike and finishing run legs. With a delay of the start times due to darkness and rainshowers, Bruins started the first 10k run pacing with a four-man pack that included Indonesia’s Johan Jahauri, and the Philippine duo of Robeno Javier and Joey Delos Reyes.

Going into T1, it has become a 2-man lead pack, as the Filipino Duathlon Champions De Los Reyes and Javier were dropped, trailing by 1 minute and 32 seconds to Bruins and Jahauri.  Bruins and Jahauri were in a virtual deadlock in the first run, with only 1 second separating each other.  Jahauri posted the fastest 1st 10k run at 34:18.

Bruins immediately went to work in the bike leg that featured a course with numerous turns despite the course profile being flat all the way.  It has also become a technical ride due to the wet roads and presence of multiple speed bumps in the course.  Bruins was unchallenged in the bike leg and posted the day’s best bike split at 1:29:05.  By T2, Bruins held a 3 minute 52 second lead over Indon Jahauri.

Bruins coasted on the last 10k run with no threat in sight.  He posted a last 10k run of 36:53, winning the elite men’s title of the inaugural Powerman Indonesia in 2:42:55, a 5 minute 47 second margin over 2nd place local elite Jahauri.  Jahauri finished in 2:48:42.   Filipino Robeno Javier completed podium by grabbing 3rd, holding off uber-cyclist and teammate De Los Reyes.  De Los Reyes was never able to display his bike strength as he experienced numerous chain drops in the speed bumps.

Airi Sawada of Japan was also unchallenged in the race as she led wire to wire, winning in 3:11:18, a 3 minute 32 second victory over runner-up, Alexandra McDougall of Australia.  Sawada led from the start with a 40:23 time in the first 10k.   Indonesia’s Eva Desiana, tried to keep pace with Sawada but could only muster a 2nd best 40:51 first 10k run. Aussie McDougall though was able to catch up with Sawada in T2 by posting the women’s best bike split of the day at 1:44:30.  Sawada though would not be denied as she showed her class in running, with a finishing run of 42:37.    Eva Desiana completed podium for her home country finishing in 3:35:24.