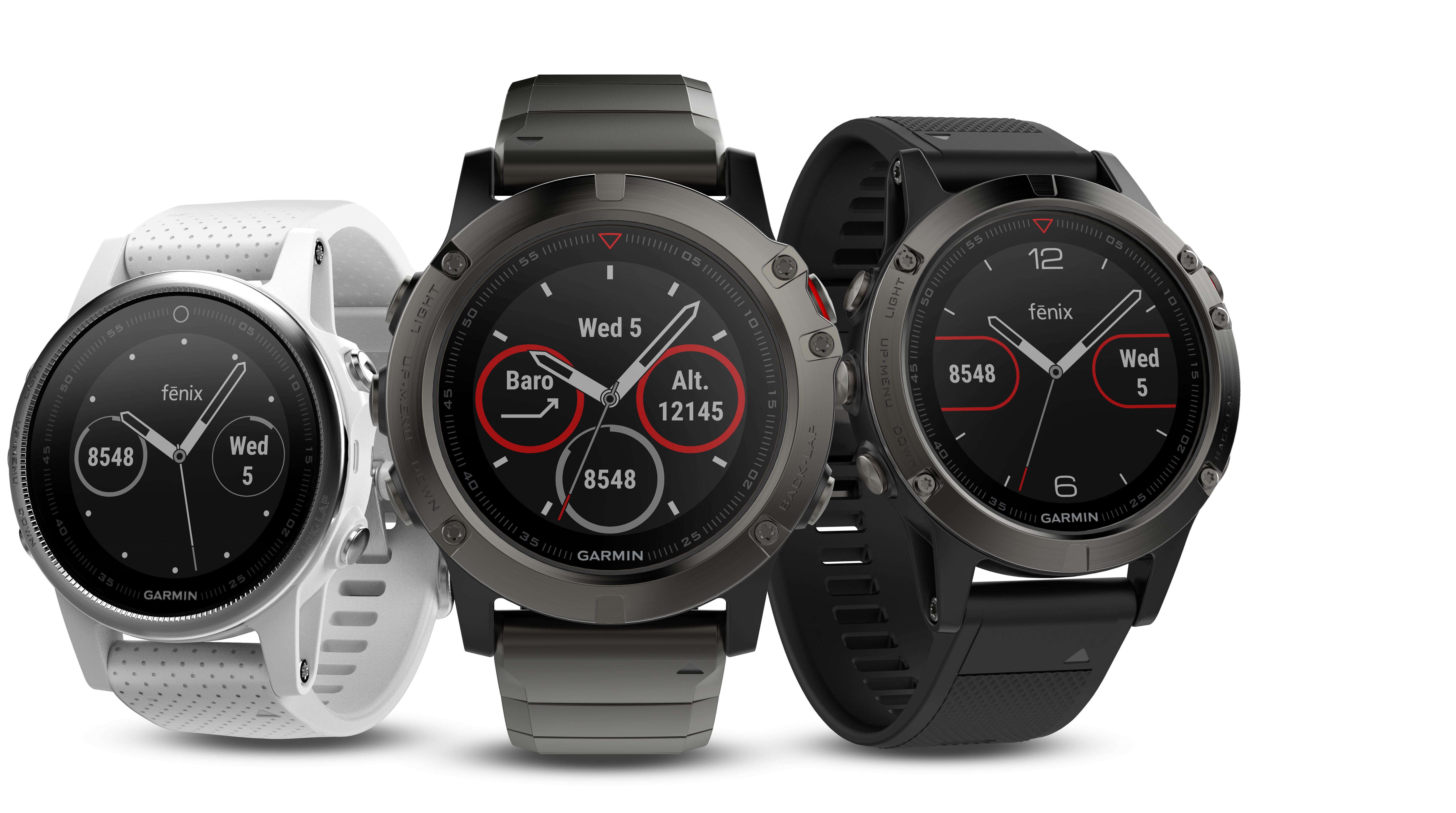 It is pretty safe to say that a lot of multisport athletes are fans of the Garmin Fenix line.   In various reviews,  the Fenix 3 series received good to great remarks for its versatility, functionality and looks.   Now Garmin is upgrading the Fenix series with the  release Garmin Fenix 5, and will offer them in 3 models:  Fenix 5, 5S and 5X.

If you are wondering what happened to the Garmin Fenix 4 series, Four is quite considered an unlucky number in East Asian cultures. Here is the official release from Garmin:

Garmin International Inc., a unit of Garmin Ltd. (NASDAQ: GRMN), today announced fēnix 5, fēnix 5S and fēnix 5X, adding three watches designed with adventurers of all sizes in mind to its popular line of multisport GPS wearables. The fēnix 5S is lighter, sleeker and smaller than previous models – perfect for small wrists without sacrificing multisport functionality. The fēnix 5X boasts preloaded wrist-based mapping; and the compact fēnix 5, like other fēnix watches, is feature-packed and ready to take on any adventure with an all-new industrial design. All of the fēnix 5 models are 24/7 wearable with extended battery life, daily activity tracking1, Garmin Elevate™ wrist heart rate technology, and a host of connected features2. And users can easily switch between stylish leather and metal accessory bands to sporty silicone in seconds and without tools, thanks to the new QuickFit™ bands. With the new fēnix 5 lineup, users now have a watch that compliments their style and adventures.

Measuring 47mm, the fēnix 5 has a brand new industrial design and is more compact than previous models like the fēnix 3HR, but is still packed with multisport features. All of the new fēnix 5 models are available in a variety of colors and finishes with more accessory bands available (sold separately), which makes the new QuickFit bands a great addition. Users can mix and match between their choice of leather, metal or silicone watchbands and switch between them in seconds with no tools needed. Easier than changing clothes for different occasions, fēnix 5 users just need to swap, click and go to change out their band.

The first fēnix designed with a focus on female adventurers, the fēnix 5S is a sleek, smaller-sized watch. At 42mm, fēnix 5S is small and comfortable for petite wrists, without compromising any multisport features. Both stylish and functional, fēnix 5S is available in silver with either a white, turquoise or black silicone band with a mineral glass lens. The fēnix 5S Sapphire has a scratch-resistant sapphire lens and is available in black with a black band, champagne with a water resistant gray suede band or champagne with a metal band. The fēnix 5S Sapphire units also come with an extra silicone QuickFit band.

Preloaded with TOPO US mapping, routable cycling maps and other navigation features like Round Trip Run and Round Trip Ride, the fēnix 5X measures at 51mm. With these features, users can enter how far they’d like to run or ride, and their watch will suggest appropriate courses to choose from. Users can also get at-a-glance guidance from their fēnix 5X. During an activity, easy-to-read guidance cues for upcoming turns are displayed as banners on the watch so users are always aware of their route. Additionally, fēnix 5X users can use the Around Me map mode to see different points of interest, waypoints and other map objects within the user’s range to help users be more aware of their surroundings. Users can configure their fēnix 5X to see data overlays on mapping screens, and to see highlight key information without having to switch screens during an activity. The fēnix 5X is available with a scratch-resistant sapphire lens.

Great to see that the new Fenix 5 has sizes for everyone.  One drawback the Fenix 3 has was it was somehow bulky to users who has small wrists, mostly women.  Now that it has a petite version, the 5s, at 42mm case, Garmin hit it the right spot in offering the Fenix 5 for everyone.  For those who like it big, there is 5X, looking mightily like a beast of a watch at 51mm size case.

Tech: Why You Should be Racing In A Two-Piece Sleeved Tri-Suit

Winner of the Free Entry to CanadaMan Extreme Triathlon Announced