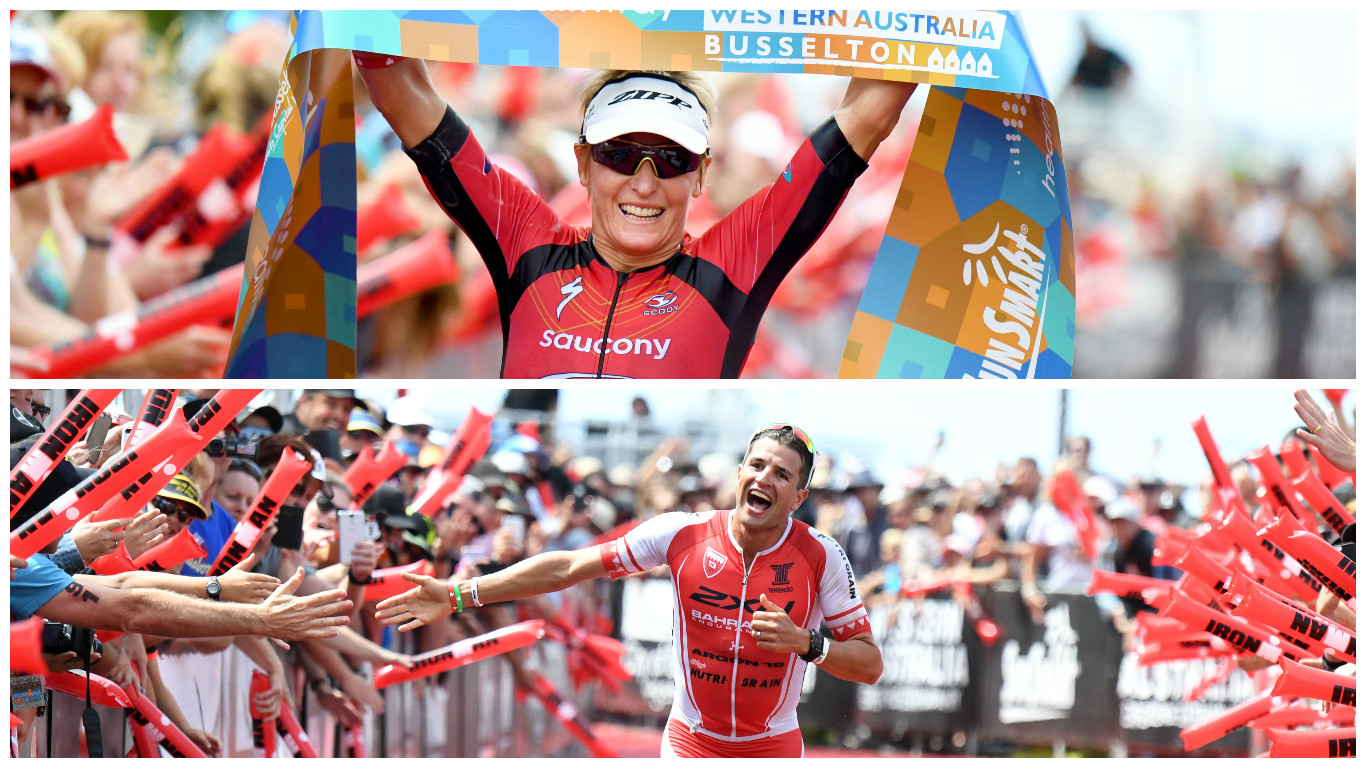 Both previous IRONMAN® 70.3® World Champions failed to finish the recent IRONMAN®  World Championship in Hawaii with leg injuries, and both wanted redemption and quickly.

They achieved that in spades with the 31-year-old Bozzone claiming the men’s honours in 7:51:25, nearly five minutes inside Luke McKenzie’s record set last year, while Hauschildt fought cramps in the second half of the run to finish in 8:54:39, just over two minutes ahead of Kiwi Britta Martin’s 2014 record.

Even second placed Andy Potts (USA) got under the old record as he limped across the line in 7:55:11 while Australian Nick Kastelein enjoyed his first IRONMAN podium in third. “I can’t believe it I started my IRONMAN career in 2009 and it is an amazing win today, thank you Busselton,” Bozzone said. “I just felt good today; it’s an amazing feeling to get my first IRONMAN win.”

Kastelein led Queensland’s Clayton Fettell out of the swim, both recording 46:09 for the 3.8km swim in glassy conditions, to better the previous swim record and signal what was to come.

Bozzone and Kastelein, who are training mates with Sunshine Coast-based 2016 IRONMAN World Champion, Jan Frodeno, opened a telling early lead on the two-lap bike. By 55kms they were nearly five minutes clear before the Kiwi made his move, establishing a 3:37 advantage over his friend at the halfway mark which he extended to over nine minutes into transition after the 180km journey.

American Andy Potts worked his way through the field into second, taking time out of Bozzone during the run, but the result was never in doubt as he won in 7:51:25, well inside McKenzie’s record of 7:55:58 and entering into IRONMAN’S rarefied air.

Potts limped over the line in second in 7:55:11, also under the old mark, while Kastelein was rewarded for a strong day with his first IRONMAN podium.

“Hats off to Terenzo, he was outstanding out there today, that was a tough day,” Potts said.

It was telling in the women’s race when the outstanding bike-runner, and current European IRONMAN and IRONMAN 70.3 champion, Melissa Hauschildt was fourth out of the 3.8km swim. More so that other pre-race favourites, defending champion Sarah Piampiano (USA), three-time runner-up Mareen Hufe (DEU) and Sweden’s Asa Lundstrom were over six minutes adrift.

Hauschildt took no time in assuming control on the bike, ahead by four minutes by midway through the bike before Hufe made her move, ultimately grabbing the lead with 15kms left and taking a near three-minute buffer onto the 42.2km marathon run.

That advantage did not last long against the might of Hauschildt who regained the lead before the 10km mark and while it was not a vintage display of bounce and beauty on the run, the Queenslander was never seriously threatened.

She suffered cramp to mar her victory celebration on the finish chute but still won in 8:54:38 to better Britta Martin’s 2014 course record by two minutes. Hufe held on strongly for her fourth straight runners-up effort with Piampiano bagging the best run for third, all three going under the magical nine-hour barrier.

See also:  The disc wheel debate - Is it the right wheel for you? “I was so nervous out there from the 24km mark I got the first cramp, and I’ve never had cramps like that it was so debilitating I didn’t think I could get through it. Between the cramps I was running four minutes per kilometre, then I’d stop and run a 10-minute km,” she said. “I felt really good on the bike, I had a leg issue in Kona, but I got through that, and I was really happy to win.”

The Best Photos from 2016 Powerman Philippines