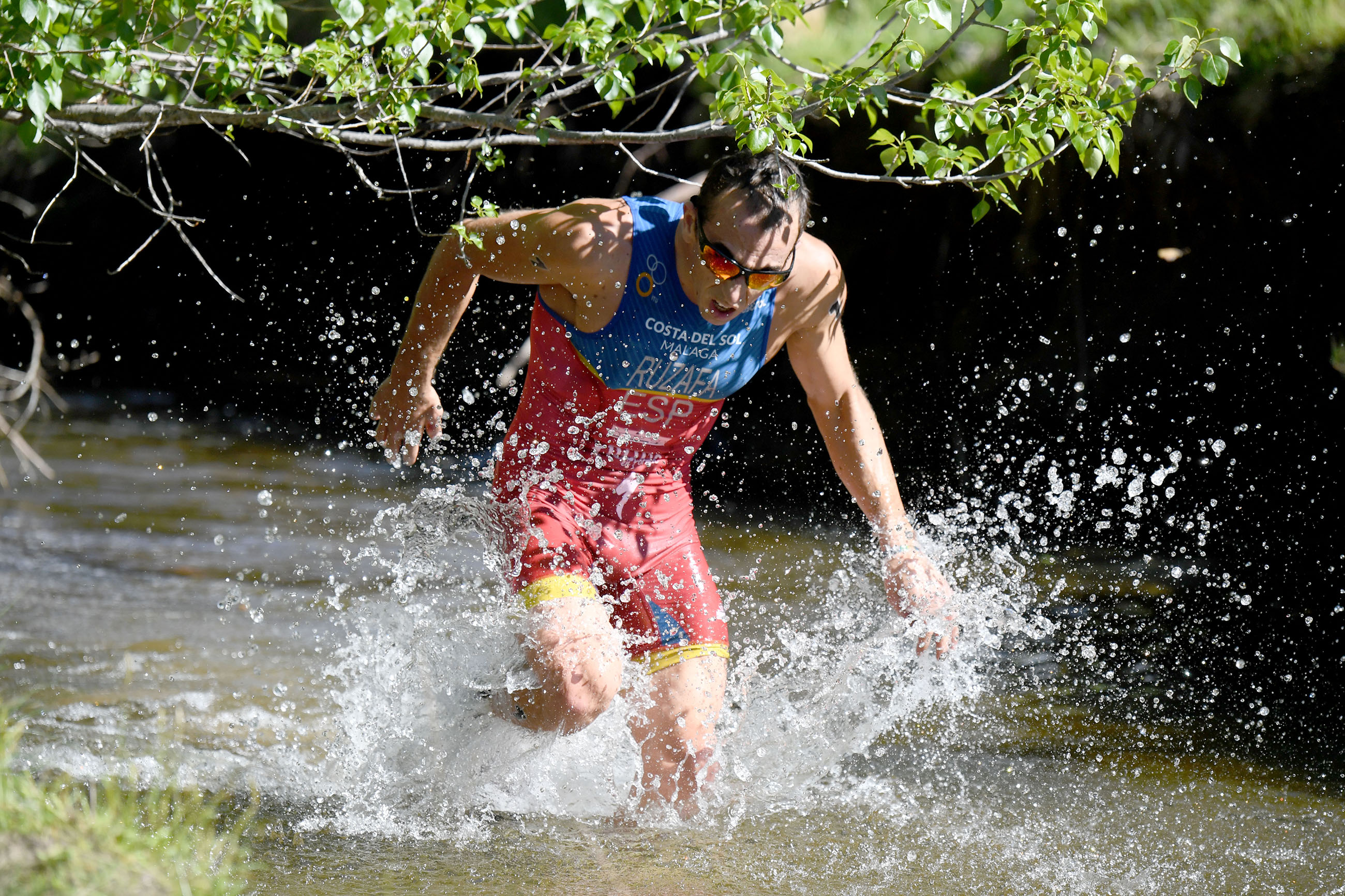 He was the hunter for the first part of the race, as he predicted, but his patience, experience and skill earned Ruben Ruzafa (ESP) a third ITU Cross Triathlon World Championship.

After exiting the water in 16th place he clawed his way to the front on lap two of the bike and ran away with it from there, winning an unprecedented third consecutive year. Earning his first ITU podium, Josiah Middaugh (USA) finished with the silver medal and Braden Currie of New Zealand with the bronze.

“I thought the race would be more hard because the cause was flat. In the swim I lose less than I thought maybe 1.20 and I caught the riders early in the beginning of the lap,” said Ruzafa.

“Every lap I try to increase my performance, on the last lap I push until the limit and I arrive first, I’m really happy because Maui was hard for me losing in the last 2km.”

Australia’s Ben Allen lead the two-lap 750m swim from the gun, predicting that to win this race you would need to nail the swim, Jen Roth (GER) kept right on his toes and the pair were first into transition with the wily Courtney Atkinson (AUS), Brice Daubord (FRA), Currie and Sam Osborne (NZL) all out in smart succession. The reigning world champion Ruben Ruzafa was 1min 15sec down in 16th position.

But the dual world champion quickly made up time with his superb bike handling skills, and on the second of the two 16.4km bike loops was leading the trio out front that included Currie and Allen. Ruzafa pushed his lead out to 3min 30sec at the end of the bike. Currie was next out followed by Allen.

The mountain bike trails encompass two alpine lakes and includes rocky paths, bridges, rock gardens and creek crossings, which required a high level of skill, which Ruzafa had in spades.
Getting overtaken in the final 2km of the Xterra World Championship hurt Ruzafa and was driving him on.

“I didn’t lose a lot of energy in the bike because it was technical in the second lap I just concentrated.

“Since the beginning I start to take time in the bike and then in the run take four minutes so it’s really a good time for me to start the run,” said Ruzafa.

But at the end of lap one on the run the changes were happening behind, Currie was 2min 50sec behind Ruzafa, but Middaugh was the big mover, up into third moving Allen to fourth.

The challenging trail run traversed the banks of the Little Thredbo River with a few surprises and challenges including creek crossings, a river run, suspension bridge, obstacles, rock scrambles and some true off road terrain. It began to take its toll on the field and Middaugh seized the opportunity moving into second.
“My swim is pretty dismal and I worked through the field really good, I was a bit worried with the single track, and I didn’t think I’d be able to get through but everyone was great sports letting me through,” said Middaugh.

While Ruzafa ran away with the win in the end, to claim a third world championship gold, Middaugh was elated with his silver and a fading Currie was good enough to hold on for the bonze.

“I’m pretty happy with that I wanted to finish the season with a good race, Ruben was on another level today he’s just amazing on those corners and there was no matching that. Second place I was pretty happy,” said Middaugh.