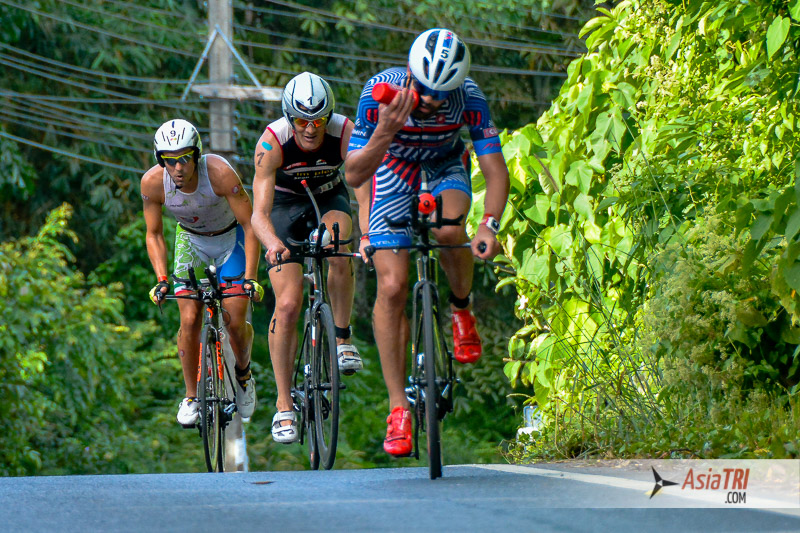 From safety and technical point of view, the organizers of Laguna Phuket Triathlon have decided to change the bike course. After many years of using the old course, Phuket has grown in its population and development that its traffic landscape has changed rather rapidly in the past few years. For the first time in history, Laguna Phuket Triathlon will now feature the new and improved “50K Bike Course” to ensure a safer, faster race and – as a result – better race experience along the scenic view of tropical parklands, rubber plantations, pineapple fields, beaches, hills, temples and local villages of Thalang District in the North of Phuket. The route is made visible on http://www.gpsies.com/map.do?fileId=dvppxvfqtvbuijna

The swim course is the same as in previous years and comprises two bodies of water. Starting on the beach between the Dusit Thani Laguna Phuket and Outrigger Laguna Beach Resort, athletes swim 1,300 metres in the sea before sprinting 100 meters across the beach to swim the last 500 metres in a lagoon finishing at the Laguna Grove. Wetsuits or speedsuits are not allowed. From our course review Laguna Phuket Triathlon, a must-do race in Asia

“A beach-run start is always a fun way to begin a race. However, unless you are trying to place in your age group, take this run relatively easy: otherwise you will spike your heart rate and it will take a couple of hundred meters in the water to catch your breath.

The first half of the swim is held in the beautiful waters of Bangtao Beach. There are usually no currents and waves which makes the first part of the swim relatively easy.

Then you run another 100 meters across the beach to dive into the resort’s lagoon. This is a challenge since the ocean water has a higher density than the lagoon (or a swimming pool), so there is a sinking feeling for the first few hundred meters of the next swim section. “

The run course will remain the same as previous year. It is flat and leads runners north through the Laguna Phuket resort complex before looping back past the Wedding Chapel through Canal Shopping Village and finishing at the Laguna Grove. The course will have three aid stations approximately 2km apart that runners pass twice. From our course review Laguna Phuket Triathlon, a must-do race in Asia

“It’s a very straightforward run, mostly on the golf course. The golf course’s undulations are not significant. The only special consideration for this course is the terrain, as the mix of grass and dirt road makes it a bit slower compared with a hard surface.”

Laguna Phuket Triathlon, named One of the Best Sports Event in Thailand