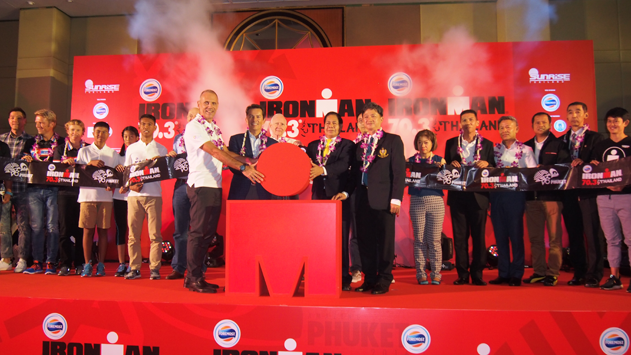 Ironman 70.3 Thailand will be held in Phuket on November 27.  Check out the official media release.  We will also be waiting for the official announcement of the Pros startlist, so stay tuned here in AsiaTRI:

BANGKOK, THAILAND (September 12, 2016) — Another IRONMAN 70.3 race is set to be hosted in Southeast Asia, this time in culture-rich and diverse Thailand. The race is scheduled on November 27, 2016 in one of the world’s premier holiday destinations, the city of Phuket.

According to IRONMAN Asia Managing Director Geoff Meyer, “This race is further evidence of the growing interest in and development of IRONMAN throughout the region. Thailand has had a long history with IRONMAN and it’s fantastic that we are back again in Phuket with an  IRONMAN 70.3 triathlon. An improved course and development in Phuket will allow us to grow the event beyond what we could in 2012 and we look forward to a great future in Thailand.”

Sunrise Events, Inc., a Philippine-based company well-known for its world-class production and organization of three IRONMAN 70.3 events in the region – two in the Philippines including the IRONMAN 70.3 in Cebu tagged as the “Crown Jewel of Asia” and the “Hollywood of Triathlon” and one in Vietnam where triathlon is proving to be an emerging sport, partners with Friesland Campina’s Foremost brand in the delivery of this race.

“Sunrise Events is pleased to announce that through our partnership with the title sponsor Friesland Campina through its Foremost brand we are bringing the IRONMAN brand back to Thailand in November 2016,” said Founder Wilfred Steven Uytengsu.

To be known as the “Foremost IRONMAN 70.3 Thailand”, the race has received tremendous support and welcome from the government, particularly the Sports Authority of Thailand (SAT) and the local government of Phuket.

Tanukiat Janchum, Director of Professional Sports Development and Boxing Department, Sports Authority of Thailand, aware that the global triathlon trend has been tremendously growing, remarked – “This is considered a successful step to turn the amateur sport into a professional one as the event will be attracting several world professionals from around the world. This will also be a stage for Thai triathlon racers to raise the bar of their standard at the 70.3-mile distance (or 113km). The SAT has foreseen the benefits for all parties and became a co-organizer of the Foremost IRONMAN 70.3 Thailand, in a hope to help Thai racers improve their potential to meet the international standards. The SAT is also ready to support and develop the sport for sustainable growth of the sport in the country.”.

Phuket, Thailand, famous for its crystal clear waters, pristine white beaches and stunning natural scenery, as well as its variety of attractions and entertainment, is not new to hosting triathlons as it was the venue of the very first triathlon in Asia 20 years ago. In this comeback of sorts, the race, the registration of which is on-going at  www.ironman.com/thailand70.3, has already attracted a thousand athletes from 56 countries including over 20 professional triathletes led by IRONMAN 70.3 World and Asia Pacific Champion, Tim Reed.

“Phuket City is ready for the Foremost IRONMAN 70.3 Thailand as it has high experience in hosting international sports events over 10 years. It has been an honor for the city to host such world-class triathlon competition as the Foremorst IRONMAN 70.3 Thailand. The event is considered a successful step for the city to hold another international event, after the Asian Beach Games in 2014. Today, the Phuket City is pleased and ready to hold the event which will happen on November 27. The city also would like to invite all Thais who have a great passion in triathlon – the fast-growing sport – to attend or cheer on the racers in Phuket. The city is ready to welcome everyone.” said Prajiat Aksornthammakul, Phuket Deputy Governor.

Together with the IRONMAN 70.3 triathlon, the junior version of the said race will also be brought to Thailand – the Foremost IRONKIDS Thailand, will be a run race that is open to kids six to 14 years old. It will be held at the Xana Beach Club Laguna Phuket on November 26, 2016 and will be a fun and awesome pre-event activity to usher in the next day’s main event.

Foremost, a brand of Friesland Campina is the title sponsor of both the Ironman 70.3 and Ironkids. The company has entered a multi year partnership with Sunrise after seeing the value of sports and nutrition as key drivers for a healthy lifestyle.

With the same objective and commitment in mind, we extended our effort by joining Sunrise Events, Inc. as the title sponsor of “Ironman and Ironkids”, another perfect vehicle to help fostering the realization of how sports and nutrition take an important part in making our kids grow strong both emotionally and physically. Healthy kids will grow into a strong foundation that helps build the strong society of Thailand,”

Video: How To Climb In And Out Of The Saddle | Ridesmart

A Look Back at The Swiss Epic Mountain Bike Race that Marked the First Step in The Ironman Group’s Return to Racing
September 5, 2020
Posting....