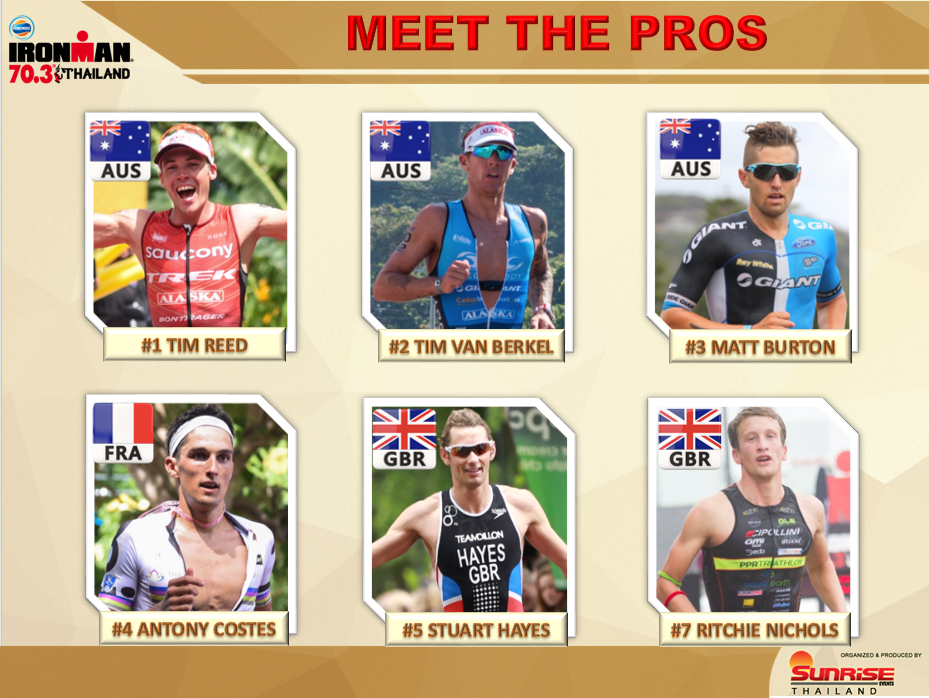 Sunrise Events has announced a deep professional field for the inaugural Foremost Ironman Thailand 70.3 set to happen on Sunday, November 27 in Phuket.  Reigning Ironman 70.3 world champion Tim Reed (AUS) will be the top seed, and will be challenged by fellow Aussie, 2016 Ironman Asia-Pacific champion Tim Van Berkel.  Darkhorses will be Michael Raelert of Germany and Phuket-based Antony Costes of France.

Reed is having a magical 2016 season.   His 2016 resume includes dominating wins in Ironman 70.3 Asia-Pacific Championship in Cebu, Philippines and Ironman Australia, and a wild sprint finish win over Sebastien Kienle in the Ironman 70.3 World Championships in Moolalooba, Australia.   Tim Van Berkel’s much awaited duel with Reed will happen Sunday.   After finishing second to Reed in 2015 Ironman 70.3 Cebu in a sprint finish, he suffered a pre-race bike spill in this year asia-pac championships, denying him an opportunity to unseat Reed.  Raelert, fresh from last weekend’s win in Laguna Phuket Triathlon, has a somewhat underwhelming season, and hopes to continue the much needed momentum to finish the year strong.  Costes, training in Thanyaputra Sports Center in Phuket, will have familiarity on his side.  He suffered a spill in last weekend’s race though, and hopefully he would need a good recovery to maintain his darkhorse status.

In the women’s side, based on her 2016 season alone, Amelia Watkinson (NZL) is the de-facto favorite after winning ten of her eleven triathlon starts for 2016.  Her recent win was last weekend’s triumph in Laguna Phuket Triathlon.  Just like Costes, Watkinson is part of the Thanyapura Triathlon Team, and would have training ground advantage, in terms of terrain and weather acclimatization.  Others in the list include Dimity Lee-Duke (AUS), multiple Italian triathlon champion Martina Dogana (ITA), Emma Pallant and Parys Edwards of United Kingdom.

Over 1,000 athletes will toe the starting line on Sunday for Ironman’s return in Phuket.  It is expected to be one of the bucket-list triathlon event in Asia.  Stay tuned to AsiaTRI for our race coverage.

Video: How To Ride In A Group | Ridesmart