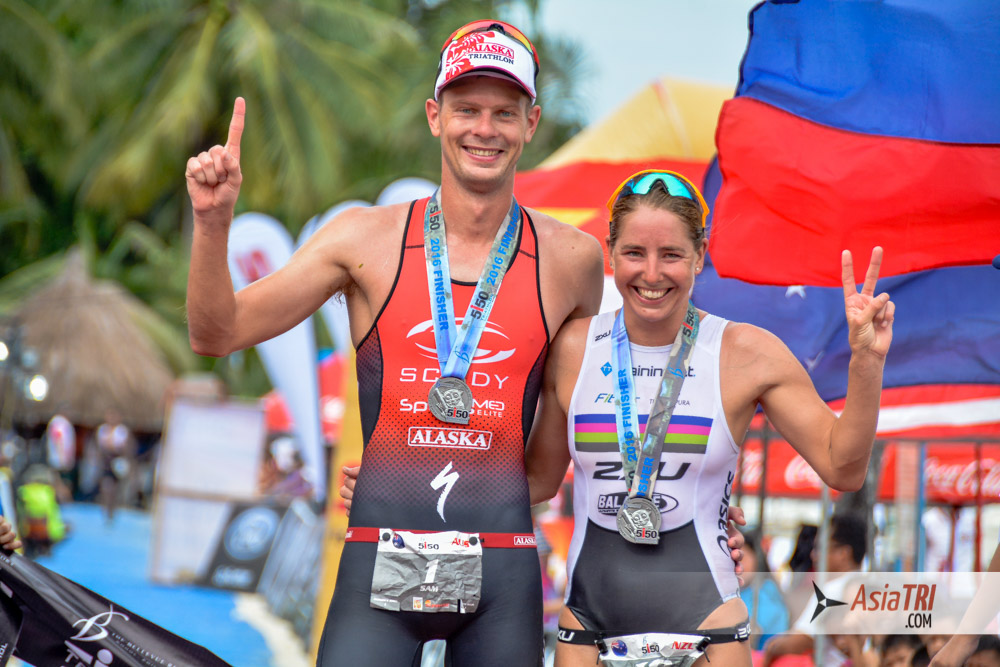 Set amidst a scenic beach resort location in Panglao, Bohol, The Bellevue Resort Bohol 5150 delivered in its promise to be a beautiful race-cation destination race.   Betten and Watkinson ruled  a small professional field, but were joined on the starting line by more than 600 age group athletes. Sam Betten had the day’s best swim, 21:18, and came out of the water 43 seconds ahead of Germany’s Henry Beck.  Philippine-based Dan Brown of Australia came in at 28:10.   Betten immediately charged ahead on the bike, and also had the day’s best 40k bike split at 56:40.   Beck tried to keep up with a split of 58:39, but came into T2 trailing Betten by 2:42.  Betten was never threatened on the run, as he ran the 4th best 10k run split of the day at 39:47.  Three Filipino male elites went under 40 minutes.   Betten was unchallenged throughout to win in 2:01:40, a winning margin of 8:27 over Beck.  Brown completed podium by finishing third. Just like the men’s race, Watkinson staged the wire-to-wire win by having the women’s best swim split at 23:35, quickly gaining a 1:55 advantage over defending champion Dimity Lee Duke (AUS). Last-minute starter Rebecca Ohlwein (AUS) and  Michelle Duffield also of Autralia came out at 27:20 and 28:10 respectively.

Duke tried to mount a rally at the bike, but Watkinson kept composure and also registered the women’s best bike split at 1:00:22.   Duke went into T2, trailing Watkinson by nearly 3 minutes.   That cushion would increased gradually along the 10k run.  Watkinson, mirroring the men’s race, was untouched and won in 2:10:19.  Such a strong race by Watkinson, who trains in Thanyapura, Phuket, she would finish in 3rd overall, missing the 2nd overall (Beck) by just 12 seconds.  Duke would finish in 2:15:10, and Duffield rounded out podium by finishing 3rd.

In the post-race press conference, Amelia attributed the scenic race, as well as the huge local support. ” I think some of the local support really had an affect on me and was awesome, giving me high-fives everytime I catch up with the boys” added Watkinson. In a close race, Jorry Ycong won the Filipino Men’s Elite race in 2:10:55, coming from behind in the run to beat Paul Jumamil by 49 seconds.   Emmanuel Comendador had the day’s best run at 36:11 and would win the battle for 3rd over perennial Pinoy standout Augusto Benedicto. In a fitting gesture and a means to promote the race as a premiere race destination, Sunrise Events, Inc., the Philippine license holder for Ironman 70.3 and 5150 events, and title sponsor Bellevue Resorts will treat the Pro athletes to a trip to Bohol’s finest tourist locations such as the diving spots and the province’s most iconic spot, the Chocolate Hills.

As a testament to the wonderful organization put up by Sunrise and the local government of Bohol, Champion Sam Betten summed it up: “That’s why I keep coming back, the people of the Philippines are one of the most friendliest and supportive in any country around the world, and they got some amazing destinations, Bohol is one of my favorite races in the world now. It’s so beautiful here, and that’s why last year, I  said I have to bring my partner along, and I’m glad she came out.  Just lovely!”