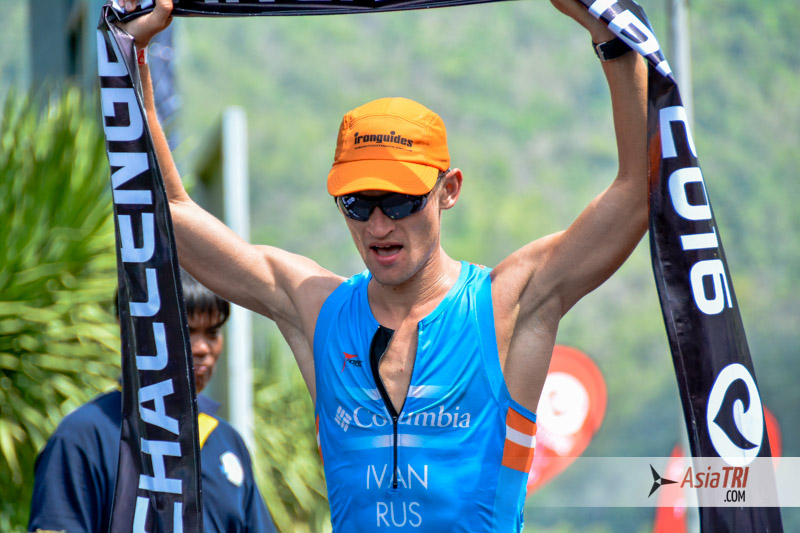 We profile an up and coming age-grouper who has only took up triathlon two years ago, and surprisingly was the fastest age-grouper in Challenge Kachanaburi, in his first try at the half-iron distance.  Meet Ivan Vlasenko, a 30-year old Russian who is now based in Bangkok, and is now working part-time as an Ironguides assistant coach. Let us know him more:

AsiaTRI:  It seems that you have a good sporting background, how did that led to the sport of triathlon?

Ivan:  I have a pretty varied sporting background.  I started to play street football when I was 7 years old.  I also did judo for 3 years.  At the age of 11 I got invited to be part of our athletics team.  From there I represented my school as a middle distance runner.   At age 18, I started cross country ski training in Siberia, as we have snow from end of October till April.  So for 6 years, I represented my university as a cross country skier.  Seven years ago, after finishing my degree as engineer of public catering, I went to Bangkok to try a different life.  In 2012 I decided to train for road and trail run events, as well as adventure races and duathlon.   The boom of triathlon in Bangkok 2 years ago, I was also swallowed by it, so I decided to focus on it.  It was only this year that I took it seriously under the guidance of  Coach Vinnie under the Ironguides method principle. AsiaTRI:  You were the first age-group finisher in Challenge Kanchanaburi, How was the race, did the win surprised you?

Ivan: The swim course looked beautiful, but when I learned that the depth of the dam was 100m, it affected me mentally, and so was my time haha.  At this point I realized, I need to improve my mental training, as well as add more open water sessions in the plan.  Coming out of the water and negotiating the first 4km uphill long climb, I felt good passing athletes who were faster than me in the swim.   In the turn back downhill portion, I played it safe, even if I was losing 15-20 seconds to others.  Coming into T2, I knew I was the 3rd age grouper, and also knew I was faster on the run on the 2 guys ahead of me.   Cautiously though, I still ran a steady pace to avoid 17-18km mark burnout as it was my first half-iron distance.  I’m just glad I was able to get the lead and keep it till the finish line. AsiaTRI:  Being based in a big urban center like Bangkok, How do you cope putting in the hours in training while also maintaining a day job?

Ivan: My day job gets me to work from Tuesday to Saturday, from 7pm till 11:00, so I have free time during the day.   Good thing is that I stay near the big sports center.  It’s just 2km away from the velodrome, a 50m covered pool, and a 400m track.  Helps me a lot with time management.  For long rides, I use the sky lane, a bike lane 23 kms long.  Twice a month I try to go out of the city for a 2-3 day training in the hills.

See also:  Off-Season: Races are over, now what? AsiaTRI:  Any big plans for the future?

Ivan:  Starting November, I will start my online Ironman Coaching certification to improve my theoretical knowledge in the sport of triathlon.  I am also assistant coach for Ironguides squad in Bangkok now, so I’m knowing a lot under the guidance of Coach Vinnie.

As an athlete, the main goal next year is always to be the first Thailand-based age grouper in international races.  I look forward to racing against the best age-groupers in the asian triathlon scene!