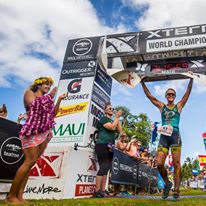 The race recap from the XTerra Worlds in Maui:

In the men’s race Mendez posted the fastest run split of the day (42:06) and passed three-time XTERRA World Champion Ruben Ruzafa from Spain with one-mile left in the run to take the tape in 2:49:38.

“It’s a dream come true,” said Mendez, the first pro from Mexico to win an XTERRA World title. “I’ve looked up to these guys for so long and now to be up here with them is very special. I’m just happy, really happy.”

In the women’s race Flora Duffy led from start-to-finish and posted the fastest swim, bike, and run times to take the win in 3:14:59, more than 10-minutes ahead of runner-up Lesley Paterson from Scotland. It’s Duffy’s third XTERRA World Championship win in a row, tying Julie Dibens record of three straight from 2007-09.

“It was really tough out there,” said Duffy. “I crashed on the bike, went over the handlebars and flying into the bushes. My gears weren’t working, and all the while Lesley was back there charging hard behind me. The 3-peat it really cool. It’s actually probably even cooler with the fact that I also won the ITU World Championship and then to back it up with this, wow, it’s really a year I could not have asked for. And to tie Julie’s record of 3 in a row, it’s not easy to do, so many things can go wrong out there. You really need a bit of luck, to prepare meticulously.”

Both Mendez and Duffy earned $20,000 USD for their respective victories. The total purse was $100,000, and the event was filmed for international television distribution.

More than 800 endurance athletes from 46 countries participated in the event, which started in the rough waters of the Pacific Ocean at D.T. Fleming Beach, continued with a 20-mile mountain bike that traversed the West Maui Mountains, and finished with a grueling 6.5-mile trail run.

See the Gallery below:

Video: How To Get Aero | Find The Most Aerodynamic Position On Your Road Bike