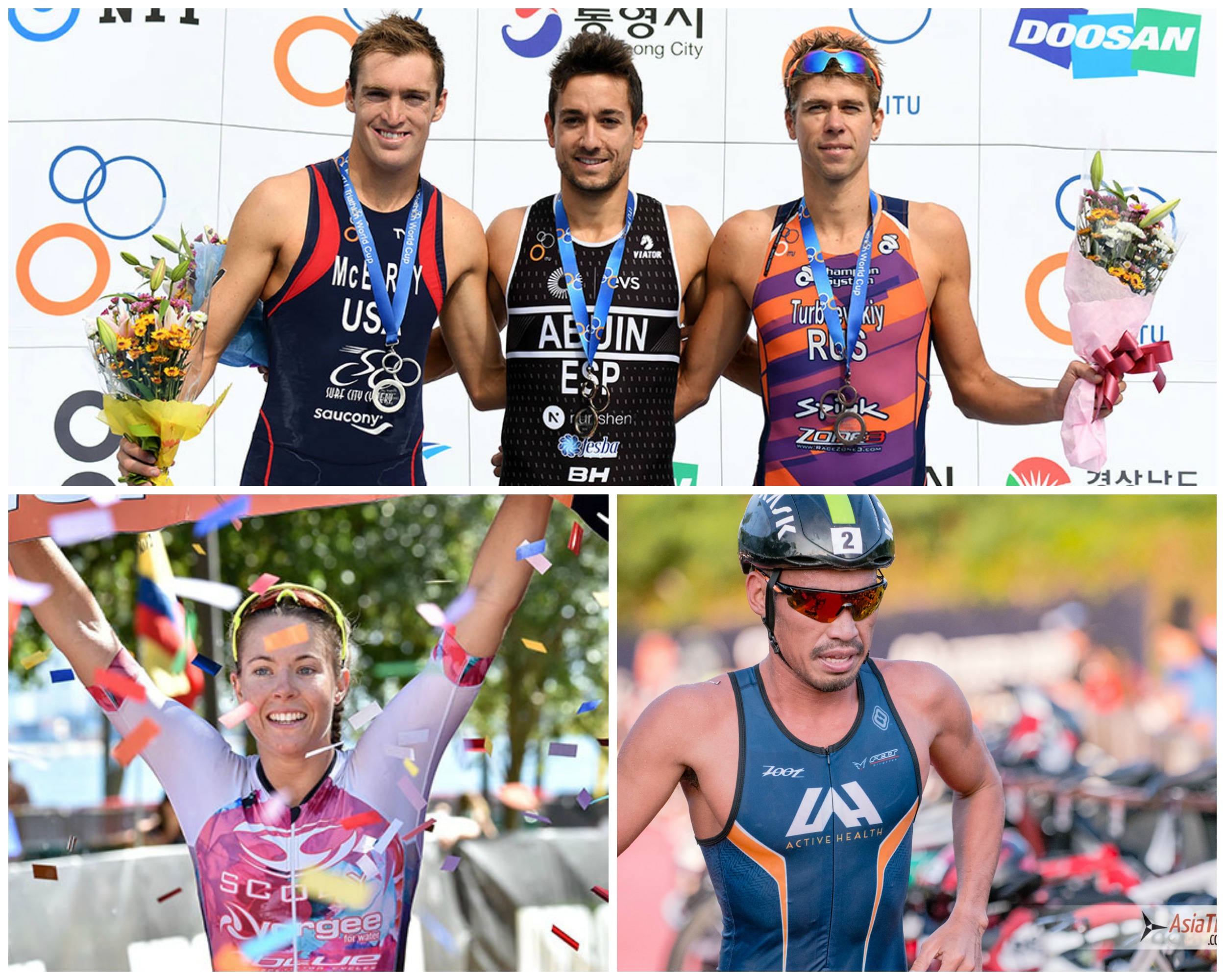 Bozzone and Salthouse Take the Titles in the Sunshine State

Terenzo Bozzone made a decisive move on the bike while Ellie Salthouse was out front from start to finish at the City Bikes IRONMAN 70.3 Miami.

Michael Raelert (DEU) was first to scramble out of the calm waters of Biscayne Bay. The two-time IRONMAN 70.3 world champion had a pack of six men who were all less than 10 seconds back from him as the leader headed into transition and contained Manuel Kung (CHE), Eduardo Lass (BRA), Rodolphe Von Berg (USA), Carlos Fore (COL), Sevn Riederer (SWZ), and Terenzo Bozone (NLZ).

Bozzone stormed to the front of the race in the opening miles and had established a 1:43 lead on Ben Collins (USA) at 28 miles and between two and three minute advantages on the next seven men that included Raelert. At the conclusion of the 56 miles, Bozzone had stretched his lead out to over three minutes on Collins and over five minutes on Fernando Toldi (BRA) and Raelert.

It was evident early into the run that Bozzone had brought his “A” game to Florida as he watched the field behind him fight it out for second and third. There was plenty of shuffling of positions for much of the run but that didn’t impact Bozzone as he nailed down a solid run and the win, while Rodolphe Von Berg and Franz Loeschke (DEU) finished the race in second and third overall.

Ellie Salthouse (AUS) towed Jen Spieldenner (USA) out of the water and recorded a 29:59 swim for the 1.2-mile swim. Seconds later, Camille Donat (FRA), Leanda Cave (GBR), and Sheila Trevleaven (CAN) followed the lead pair to their bike racks.

Salthouse and Cave broke away from the field and nudged their leads to over two minutes on the field in the first 28 miles of the the bike. The lead pair dismounted their bikes together with Salthouse holding an 11 second lead as they started the run.

Salthouse held a narrow advantage on Cave for much of the first half of the run then stretched her lead out on the entire field throughout the last half of the run. The Aussie’s fastest run on day secure the win for her by a comfortable margins on Spieldenner and Cave finished second and third.

Spain once again stood on the top spot of the podium with Uxio Abuin Ares claiming his first ITU World Cup victory in Tongyeong in a four-way sprint.

For American Matt Mcelroy it was his second silver medal this season, the first at Salinas World Cup and Vladimir Turbayevskiy (RUS) hanging on for the bronze.

Ares was in the race all day, 11 seconds down after the swim he remained vigilant, tucked into the front group on the bike and then set about his work on the run.

The final metres came down to a ‘final four’ on the blue carpet with Ares snatching the win and his first gold medal.

A capacity men’s field of 85 broke the glassy conditions of the Tongyeong Harbour in a one-lap swim. Young Australian Matthew Roberts was the first to emerge from the 750m swim with Maximillian Schwetz (GER),William Huffman (USA). Trailing them by a few seconds was the familiar site of Andrey Bryukhankov (RUS) racing without his brother this time but compatriot Vladimir Turbayevskiy (RUS) by his side. The swim did little to break up the field and subsequently a long line of athletes emerged in quick succession.

Heading out on the first of three laps on the bike a group of 27 formed at the front of the race with a 24 second lead from the chasers that contained 2016 Olympian’s Rostislav Pevtsov (AZE), Igor Polyanskiy (RUS) and Portugal’s Joao Silva all missing the front pack.

As they rolled through the transition at the end of lap one it was Ryousuke Maeda (JPN) and American pairGregory Billington and William Huffman that led the charge. Over the next two laps with multiple lead changes but no opportunity for a break away the group remained intact and prepared for a flat out 5km run.

The pace after the first 2.5km put the hurt on and we were left with just 10 men. As they came through transition for the last time, Simon De Cuyper (BEL) led followed by a trio of American’s, Kevin McDowell, Matt Mcelroy and Gregroy Billington.

As the pace heated up there remained just four in contention in the closing stages. Ares earlier patience paid dividends in the end with the fresher legs delivering him his first World Cup win in a four-way sprint on the blue carpet from Mcelroy and Turbayevskiy who backed up his win last weekend at the Alanya ETU Final Triathlon European Cup.

The penultimate leg of the ITU World Cup season was a memorable one for Summer Cook (USA) continued her outstanding 2016 break through year, winning the 2016 Tongyeong Triathlon World Cup.

Cook’s season began with victory at the ITU World Cup race in Chengdu back in April, and followed up with a career first win at WTS Edmonton. Her recent second place at Salinas World Cup confirmed her speed over the sprint distance.

Ueda has also had a strong year of results claiming bronze in front of a home crowd at WTS Yokohama and her consistency was rewarded finishing with an overall third place on the WTS ranking.

A total of 52 women hit the calm waters for the one lap swim in Tongyeong Harbour. It was a cool and drizzly day in Tongyeong as the American pair Cook and Jessica Broderick (USA) lead out of the water with Japan’sFuka Sega right on their heels.

There was a long stream of women that followed in quick succession including Zsanett Bragmayer (HUN),Yuka Sato (JPN), Jaz Hedgeland (AUS), Renee Tomlin (USA) and wearing the number one today Ai Ueda (JPN).

The swim did little to break up the front and a group of 24 merged to form the lead bunch on the first lap of the bike with a 24 second lead on the chasers. It contained all the identified contenders, Cook, Tomlin, Ueda. Three laps on the tricky course that includes a steep climb may have taken the sting out of the legs for some.

It was Australian Jaz Hedgeland, Tomlin, Ueda and Broderick that were consistently driving the train on the bike, but as they came into the final changeover it was hectic and still anyone’s for the taking.

Ueda and Yuka Takahashi were the first to leave T2 but just 11 seconds separated 22 women for the final 5km run leg.

It came down to the final 2.5km with just five women remaining in the hunt for the medals. Cook, Tomlin, Ueda, Takahashi and Felicity Sheedy-Ryan (AUS).

But it was Cook that cleared out in the closing stages to take her second world cup victory and close out 2016 on a winning note.

Mark Hosana of the Unilab Activehealth Team once again proved his worthy status as one of the Philippines’ top elite triathletes after winning the overall title at Tri-United 3, a half-iron distance event held in Subic Bay, Philippines.   Hosana won in 4:38:57, winning over teammate Benjamin Rana by more than 3 minutes.   Paul Jumamil of Rider Omega Pro team grabbed 3rd place podium with a time of 4:46:02.

Close to 600 athletes joined Tri-United 3, one of the hardest half-iron distance race in the Philippine triathlon circuit.   The last event of Tri-United series, TU4 will be held on November 27 in Clark, Pampanga, Philippines.