The story of Shirin Gerami in Kona 2016 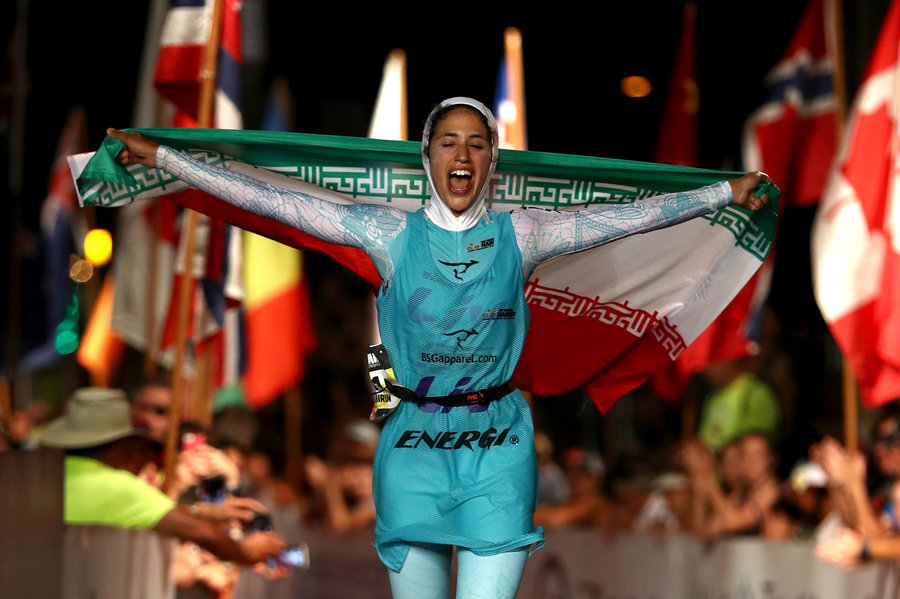 Training in three sports is something that requires a lot of dedication and will, regardless of the athlete’s lifestyle.  There are several weekly hours of sweat to conquer the physical conditioning required for a competition.  For women, balancing time for the family, work and home makes it more difficult to live the lifestyle of a triathlete.   Yet the vast majority of them do overcome the obstacles. But for a Muslim woman though, the restrictions go beyond what a typical female age-grouper face everyday.

Iranian Shirin Gerami is the only woman authorized to represent her country in triathlon competitions. Last Saturday, she realized the big dream: to complete the epic Kona Ironman World Championships.  The path of Shirin to the big island, however, was not easy.

To compete, she had to follow the rules of her faith, running the whole race, from swimming with a hijab, a kind of cloak to cover the body and hide her curves. From swimming to the finish line, in 13 hours 11 minutes and 7 seconds she was covered from head to toe over the whole 226km.

It started as a hobby, at Durham University in England. A friend then suggested that she represent her country at the famous PruHealth World Triathlon in London. Shirin called the Iranian government and asked if she can represent Iran, even if she already reside in London. There were many hurdles to overcome, since Iran does not usually support the presence of women in the sport.

Gerami insisted and perservered, saying she could find the right clothes to compete and not to offend Islamic culture. Even without wearing the hijab daily, she chose to follow the sporting standards of her home country to compete as their representative. She could just compete as a British amateur, but was determined to show the world that an Iranian woman could join a triathlon event even with the clothing restrictions.

“My hope is that finding a solution to correct clothing, most women will have the opportunity to have access to sport. Women who prefer to cover in respect of cultural and religious values. “Shirin Gerami

The first triathlon race she entered as a representative of Iran took place in 2013, but the approval of the Iranian Federation Triathlon took months since they had no definition of what was right or wrong. The athlete had to send dozens of e-mails with pictures of his clothes basically a combination of long sleeves and men’s clothing. Shortly after it also was necessary to visit Iran to prove that she was serious. The night before departing Tehran, she received permission to compete as a representative of his country, only if she competed in full hijab, all parts of her body covered except her hands and face.  She agreed.

This first event changed the lives of Shirin, who went on to receive emails and messages from women all over the world. She also won the support of major sports brands to develop their material, such as Roka.

Her clothing generates more friction with the wind, it is heavier and hotter than those of other athletes, but this does deter her.   Like all who competed on the Big Island, it was not easy for her, but Shirin only stopped when he crossed the line and heard Mike Reilly tell her “Shirin Gerami, You are an Ironman.”

“What you wear does not define who you are and what you can not do, it is just a piece of cloth.” Shirin Gerami

Super League Triathlon: REASONS TO BE OPTIMISTIC FOR TRIATHLON IN 2021
January 12, 2021