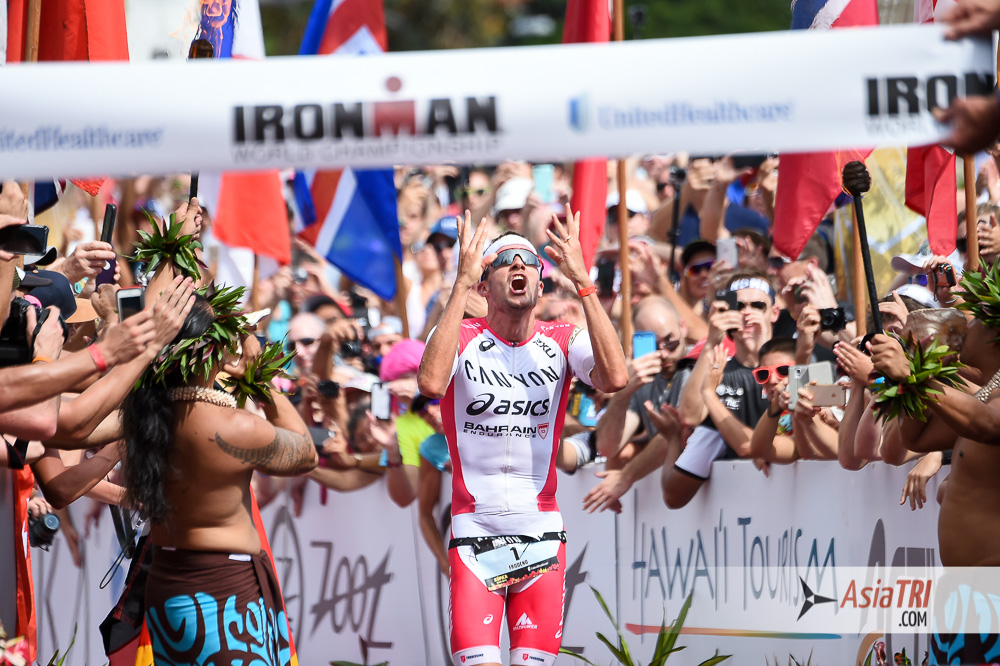 The big day has arrived, and the most anticipated triathlon event of the year, the Ironman world championship took place today. Everyone in the triathlon community directed their attention to Kona, Hawaii to follow the best long distance athletes  battle for the title of 2016 Ironman World Champion.  And Jan Frodeno was crowned King of Kona once again, one of the five men in history to win the race twice in a row, on a podium that is 100% German. With very calm sea conditions  favorable for a quick swim,  the favorite to lead in the swim was once again American Andy Potts,  an excellent swimmer who almost always come out in front leading into T1.  Right at the start, he was positioned at the left end of the group and when the cannon was shot, Potts went ahead with an initial hallucinating rate.  But unlike other previous events, he could not swim a breakaway solitary leg.   He  was marked and pressed by several other athletes, including Jan Frodeno who forced the pace and led the breakaway pack.

In the middle of  the 3800m swim, Frodeno and Marko Albert (EST) managed to open a small advantage over Potts and already had an advantage of more than 2 minutes on the second group. As the leaders approached the end of swimming, Potts managed to place among the leaders.

See also:  5 Triathlon Running Tips You Might Not Know About

Although Wiltchire was the 1st out of the water, Frodeno quickly regained the lead.  2014 Champion Sebastian Kienle, went out for the bike leg with a time deficit of four minutes to the leaders.

The beginning of the bike leg was very intense, with several changes at the lead position, McMahon (CAN) was the first to enter the Queen K, but the lead position continued to change frequently and a large lead pack was formed with 24 athletes in a long line, separated by a mandatory non-drafting distance.

At the half of the 180km cycling, Kienle was already leading the first group composed of 10 athletes, the chase pack with 12 athletes separated by 1 minute.  Igor Amorelli (BRA) remained in the lead group, but unfortunately suffered some mechanical problems in the transmission of his bike that caused him to be dropped.  Igor was able to return to the race and recover some of the lost time.

The lead changes was maintained throughout the leg, but the size of the group of leaders was gradually decreasing, now with only 7 athletes.  Kienle was the 1st to enter the T2 with 4h23’55 ‘for 180km, missing the best bike split of the  the race by only 51 “.   The best bike split belonged to another uber cyclist and  another German, Boris Stein with 4h23’04” (40, 86km / h average).

Igor Amorelli entered T2 in 12th place, 6 minutes and 29 seconds behind the leaders, followed closely by Lionel Sanders (CAN) and Andy Potts, who suffered a bike crash but appeared fortunatelt to escape with minor scrapes.

Frodeno made a very rapid transition and was the 1st to start the run leg, closely followed by Kienle, McKenzie (AUS), Hoffm an (USA), O’Donnell (USA) and Boecherer (GER).  In the first kilometers Frodeno and Kienle ran shoulder to shoulder and several times talked with each other.  But Kienle failed to follow the pace imposed by Frodeno when they reached Palani Hill and ended up letting him go alone in the lead.

Halfway through the race, Frodeno had an advantage of 1’30 “on Kienle and 4’40” ahead of Boecherer.

This year, three amateurs completed the event below 9 hours. The age-group champion, along with the first three professionals, is also a German.  Lucas Kramer won the category 30-34, with 8:55:24 and counting age-groupers and professionals, he was 35th overall.

Ryf Repeats at Kona with a Record-Breaking Performance

The Father of Philippine Triathlon
August 30, 2016