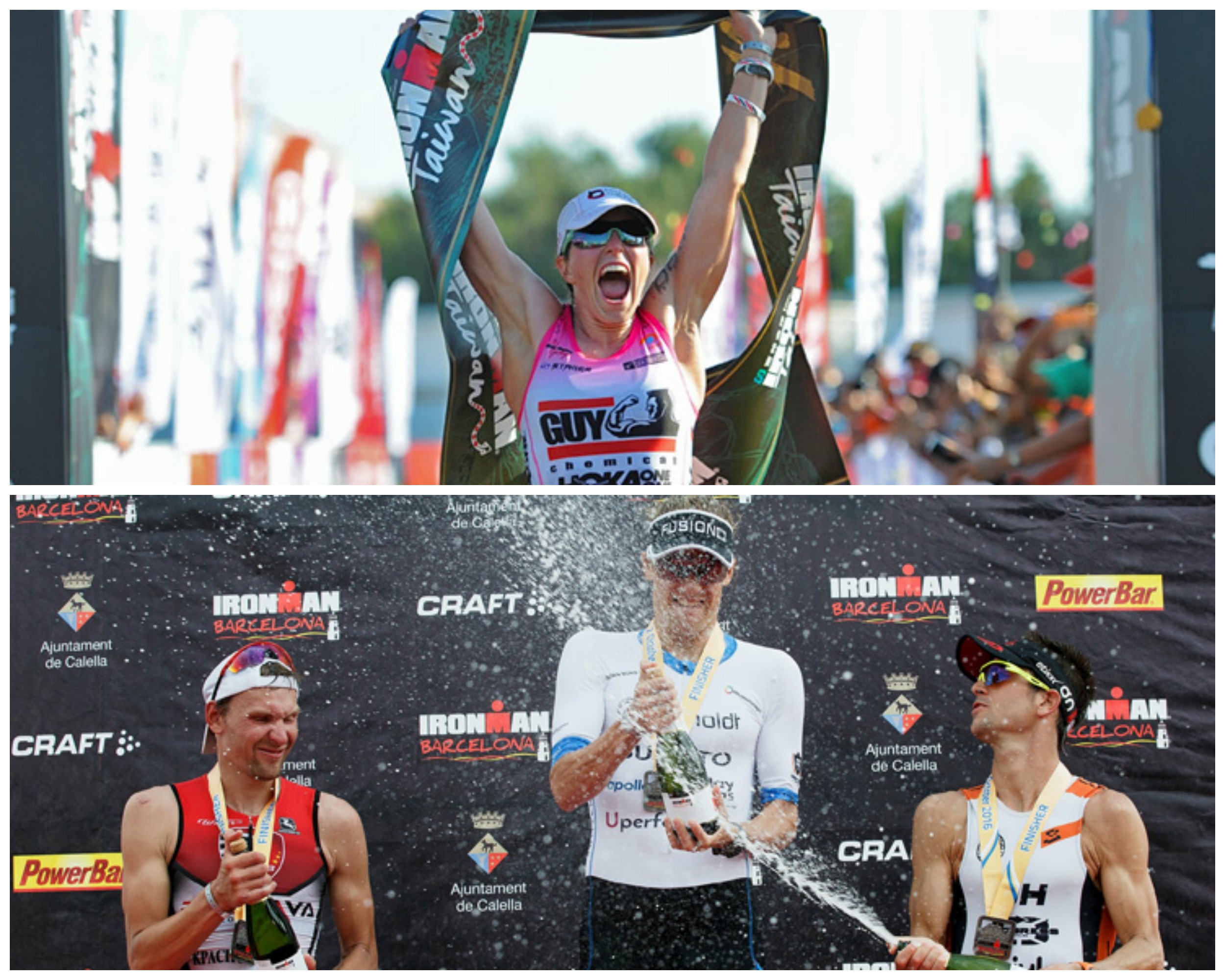 An American returning from hell and a two-time Olympian prevailed in the heat and humidity at IRONMAN Taiwan.

Twelve months ago American Danielle Mack fell into a deep, dark hole with a combination of severe over-training and a range of ills and woes.

She used her strong beliefs to persevere, finally finding a small light which erupted into a rainbow of celebrations when Mack won IRONMAN Taiwan on the island paradise of Penghu.

Meanwhile Argentina-born Daniel Fontana, who represented his homeland at the 2004 Olympics and his adopted home of Italy at Beijing in 2008, also returned from a two-year injury-enforced hiatus to claim the men’s honours in emphatic fashion.

Organisers gave themselves a pat on the back, cleaning up to present a stunning race after Cyclone Megi swept through the region three days before.

Mack Emerges Into The Light

Danielle Mack, by her own admission, had spiralled into the depths of despair from massive over-training mixed with a range of health issues. With baby steps, built on her Christian beliefs and values, she gradually worked her way forward and ear-marked her return at Taiwan 12 months and one week to the day she had last raced.

Mack was out in third place from the two-lap swim, nearly six minutes down on leader, Japan’s Keiko Tanaka but took control by 40kms on the bike and from that point simply strode away from the field. At midway on the bike she was two minutes clear of Taiwan superstar Shiao-Yu Li and six minutes to German Katharina Grohmann.

While that margin did not grow significantly, Mack took a 2:34 buffer on to the run, with the dangerous three-time IRONMAN Japan winner Li behind and Grohmann still a factor. This trio were playing in a sandpit of their own nearly 30 minutes clear of the rest.

Mack remained calm in the rising heat and humidity – which reached 90 percent – to be the only female under 5 minute pace, celebrating much more than a mere victory in 9:50.03.

Li added another podium to her glittering array and her own remarkable journey some 20 minutes behind the American with Grohmann third a further 11 minutes back.

Such was their domination that fourth placed Jana Candova (CZE) would finish an hour behind the winner, with Mack adding a third IRONMAN win to go with the 2015 win in Canada and 2014 in Boulder.

Daniel Fontana began life as a successful Olympic distance athlete from a swimming background in Argentina who he represented at Athens in 2004 before moving to Italy, his new home, in time to compete in the 2008 Olympics.

He moved up in distance with considerable success, gaining a silver medal at the IRONMAN 70.3 World Championship in 2009 and first IRONMAN podium in South Africa the following year. That led to 12th on debut at Hawaii in 2011 and podiums in Austria (2012), Lake Placid (2013) ahead of his maiden win at Mexico in 2014.

Fontana was forced to the sidelines with injury, returning this year after achilles surgery, and like Mack, celebrated a return to IRONMAN in the most emphatic fashion.

Hungary’s Balazc Csoke opened a significant 2:21 lead out of the swim but once he was caught 70kms into the bike, Fontana sat in a bunch of six that included the remarkable 48-year-old Andreas Neidrig (DEU), top seed Patrick Evoe (USA), last week’s podium placegetters in Korea Guy Crawford (NZL), Jordan Bryden (CAN) and Swiss Patrick Jaberg.

Neidrig and Jaberg tailed off that group by the time they reached T2, but it took just 0.2 of the 42.2km run for Fontana to set the marker. He stretched to a one minute gap in the opening kilometre and by 11kms the gap was six minutes on Evoe and 11 on Jaberg, who had responded after being six minutes down off the bike.

Nilsson and Stienen Fly in Barcelona

The final full-distance event of the 2016 IRONMAN European Tour was full of drama all the way to the finish line. Both in men’s and women’s competition storming athletes made the third edition of IRONMAN Barcelona a race of records.

Nillson shines on the run

Spaniard Carlos Lopez shocked the pro field in the first hour of the men’s race. Only one week after taking IRONMAN Mallorca—thanks to a lead from start to finish—Lopez had the fastest swim again and led the field on the first kilometers of the fast bike course. Lopez exited the water in 49:22 in front of a group including 17 athletes. Within 64 seconds the first 15 male athletes started the bike ride, it was the beginning of a tough speed show.

Germany’s Johann Ackermann soon teamed up with two Dutchmen—Bas Diederen and Mark Oude Bennink—and the Swedish race favorite Patrick Nilsson to take over the lead at an early stage of the race. Through 50 kilometers those four had opened up a gap of nearly five minutes on Lopez and a strong chase group of nine athletes. While Nilsson had some technical issues the other three kept on pushing. Half way on the bike leg the Swede was six minutes down riding in no man’s land. He was in the middle of a big stretch between the leading trio and a huge chase group including some strong runners. The gaps increased and it was Ackermann who could put some time on Oude Bennink and Diederen on the final kilometers. The German reached T2 with an advantage of 38 seconds over Diederen and Bennink, Nilsson was 7:47 down in fourth and the chase group almost 15 minutes behind.

See also:  AsiaTRI Interview: A chat with the First Indonesian to Qualify for Kona

Thanks to his extraordinary fast bike split, Ackermann was leading the race for the first 12 kilometers into the marathon before Oude Bennink made his move to the front. The runner-up of the IRONMAN Maastricht was not allowed to lead the race for very long, because a storming three-time IRONMAN champ was eating up minute by minute behind him. Nilsson added another sensational run to his CV after winning IRONMAN Copenhagen in August with a brilliant performance in 7:49:18. With 17 kilometers to go, the 25-year-old passed Oude Bennink decisively. Nilsson had the fastest run of the day to clock a glorious course record. Ivan Tutukin (RUS) and Spain’s Miquel Blanchart ran their way onto the podium coming from far behind after the bike.

Stienen wins the bike and the race

Lucie Zelenkova (CZE) had the fastest swim in 55:21 and a three-minute lead when she came out of the water ahead of Germany’s Carolin Lehrieder and Annah Watkinson from South Africa. Zelenkova controlled the race on the first half of the bike stretch, but Lehrieder and Watkinson caught up with her before the 90-kilometer mark. Lehrieder started to make a move, but she had to drop out only a little later due to a flat tire. In the meantime, Watkinson got some companionship from Astrid Stienen (DEU) who appeared at the front after a weaker swim. The 37-year-old Stienen and Watkinson both pushed the pace to establish a huge lead. Stienen got off the bike in first place with a fantastic bike split, her South African shadow followed only 21 seconds later.

Third-place finisher Austrian Elisabeth Gruber was already 13 minutes down after the bike, but she focused on her running talent in a solid way. At the front of the race, it was on Stienen to show a stunning performance. The 2015 IRONMAN Sweden winner let the hammer down early in the marathon to nail the second IRONMAN victory of her career including a sub 9-hour finish. With 12 kilometers to go, Gruber eventually appeared at Watkinson’s shoulder to make the decisive pass for second place.
Originally from: http://ap.ironman.com/triathlon/news/articles/2016/10/ironman-barcelona-recap.aspx#ixzz4LytXYPCy

The making of the 2016 Kona Ironman Finisher Medal