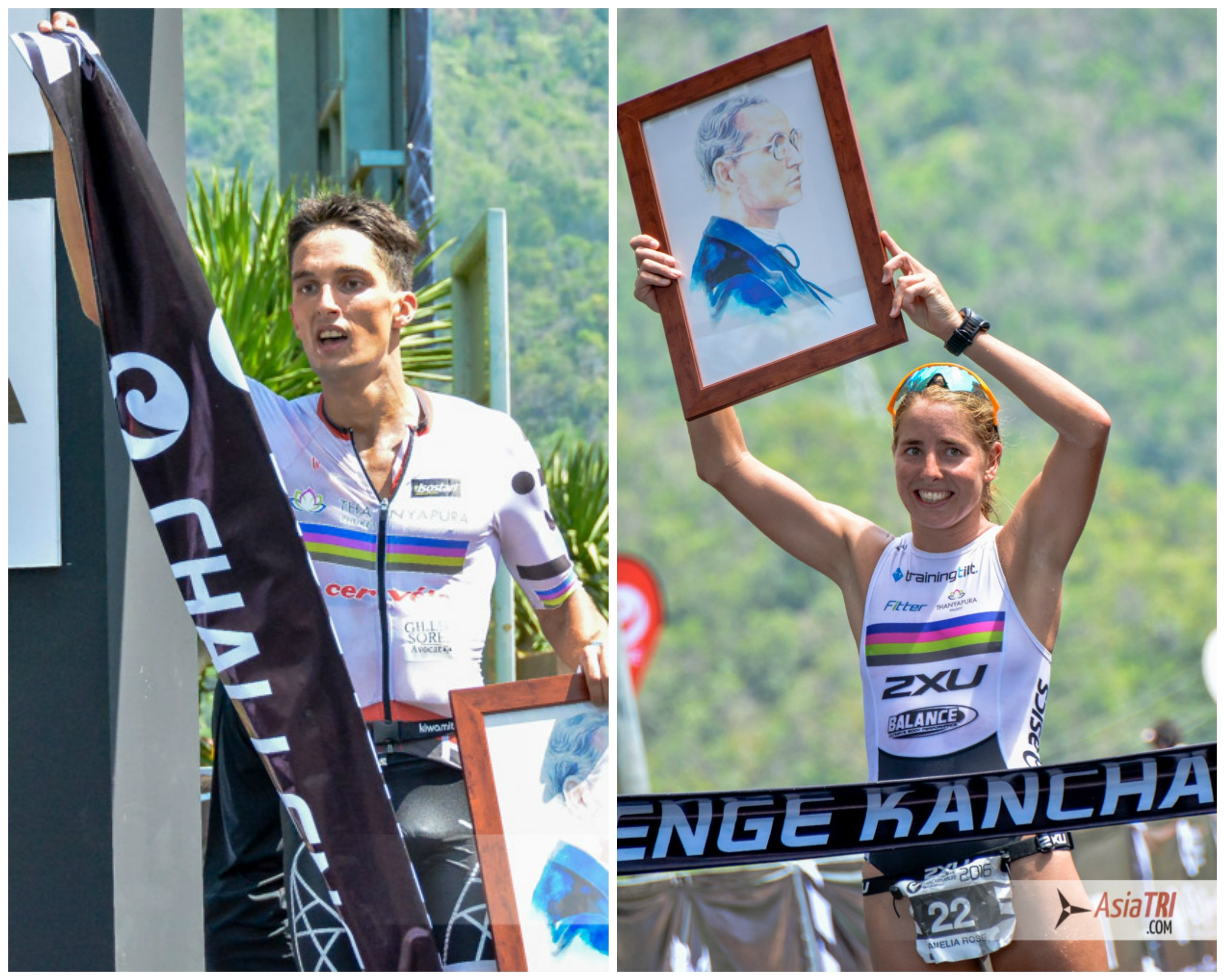 In a Challenge half race that was toned down, and nearly cancelled after the death of Thailand’s King Bhumibol Adulyadej , Anthony Costes of France and New Zealand’s Amelia Watkinson won the Pro Elite categories in the inaugural Challenge Kanchanaburi Thailand.  Marcus Altmann, CEO Challenge Asia Pacific explained.

“All entertainment functions throughout Thailand were ordered to be toned down or cancelled as a mark of respect to the passing of the King. Our Challenge Kanchanaburi event was allowed to go ahead in large part due to the amount of international athletes racing, and the positive impact the event was having on the area.

So we changed our signage to black and white (apart from a few red flags), the carpet was black, and all of the staff and volunteers wore black as well.

“No real celebration was allowed, which is why we canceled the after party too.” Swimming in the protected waters of the Srinagarind Dam, it was a welcome sight from the usual ocean water swim.   The Pros were released in a pontoon, ITU-style, which made the swim leg closer than usual in most races.  A pack of six which includes Costes, Mike Phillips (AUS), Brad Kahledfeldt (AUS), Stuart Hayes (GBR), Alex Polizzi (AUS), Lachlan Kerin (AUS) came out of the swim in just 10 seconds off each other.

In a hilly bike course, the strongest biker usually rise from the top, and it did not take long for Costes to impose his will on the pedal.  After riding with a pack in the first kilometers, Costes gradually broke away to finish his 90k bike split in 2:22:10, the best split of the race.  Entering T2, Costes held a near 3 minute lead over a chase group that included Kahlefeldt, Phillips and Hayes. Phillips and Kahledfeldt made chase on the run, where Costes is expected to cough up some minutes to the two.  They ran out of mileage though and Costes (4:16:46) was able to hang on for a 25 second victory over Phillips.   Kahlefeldt, aiming for a two-week double victory after winning Hefei 70.3 a week ago, captured 3rd podium for a finish time of 4:17:22. It was not long for Watkinson to pull away on a difficult hilly bike course.   Without any challenge on the bike, Amelia raced a women’s best 2:29:23 bike split, more than 6 minutes ahead of the closest pursuer.   Watkinson was never threatened on the run and coasted the rest of the way to secure the victory.  She finished in 4:43:38, nearly 7-minutes faster than 2nd place Pomeroy.   Radka hustled her way to a podium finish, after suffering a mechanical failure on the bike.   Radka ran the women’s best run split of 1:32:01 on a hilly run course.

Close to 800 participants joined the inaugural Challenge Kanchanaburi Thailand, which also featured a shorter Olympic Distance race over the weekend.