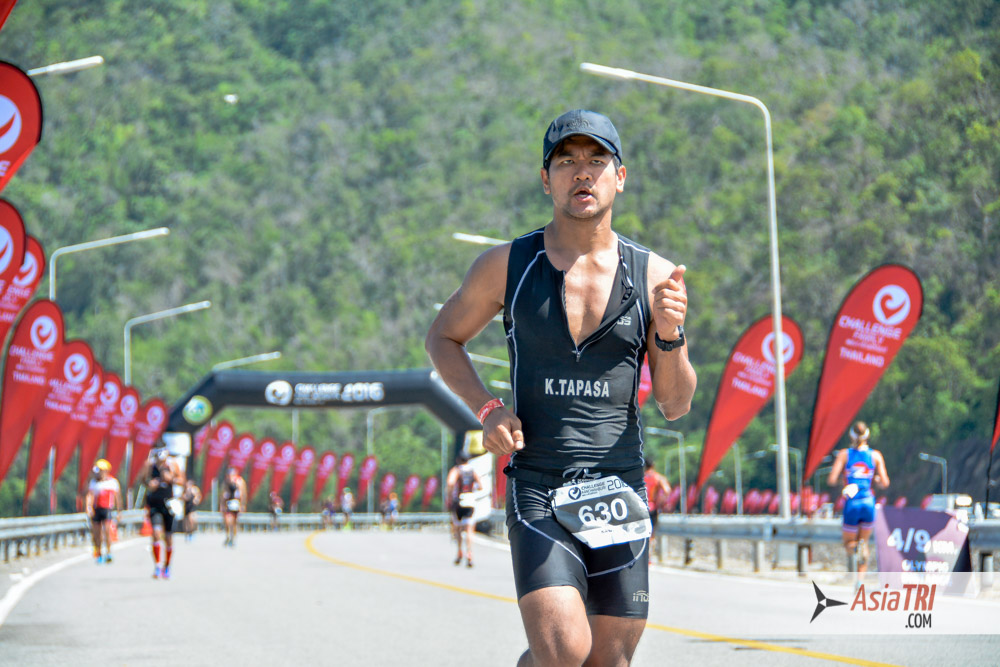 This year, the race the organizers were challenged with a very unique situation.  The race was set to happen only 10 days after the passing of Thailand’s King Bhumibol Adulayadej, who passed away ending a 70-year reign.  His Majesty’s death  impacted many other sports and cultural events in the country due to the 30-day mourning period established by Thai authorities.

Several events within the 30-day period were cancelled or postponed, but the organizers of Challenge Thailand decided to maintain the schedule as several athletes were coming from overseas. Despite last minute required changes in the event’s colors (from red to black/white) and several other unexpected challenges due to changes in officials schedules, the organizers managed to pull off a great inaugural race.

Getting there & Where to stay

Srinakarin Dam, one of Kanchanaburi’s main attraction is on the North West of Thailand, 3 hours away from Bangkok International airport.  The organizers provided limited options of shuttle services from the airport to the official hotels and back after the race. Alternatively, you could hire your own cab for around 100 USD for each way.

For a matter of convenience, the best hotels options are the official hotels which is where the shuttles services are, with full boarding accommodation and a lap swimming pool to maintain your fitness. Training around the premises is also very safe with very light traffic.

If you are considering this event as a holiday destination, there’s plenty to do in the vicinity of race central. The most famous attraction is the Erawan waterfall with 7 levels, one of Thailand’s most visited spot. Other activities are elephant riding, rafting, and if you prefer a cultural option, the River Kwai bridge and the War cemetery.  The latter will take you back to the 2nd World War, the construction of the Burma highway and the Japanese imprisonment of POWs.

The dam swim was a nice and welcome change to most races in South East Asia, providing a jellyfish-free swim in a cooler the usual water temperature. The age groupers had a rolling start separated by groups according to a targeted swim pace. The swim starts with with a dive off the pontoon.  It is a straight forward one loop swim for both distances, with the Olympic Distance athletes going on an inside loop while the Half Distance athletes taking an extra buoy on the outside.

If you did this event this year (2016), keep in mind that the course was potentially longer and or a little too slow, with the first pack out of the water in just below twenty six minutes, that is two minutes slower than the standard time at the same distance, giving approximately 150m longer (2050m). These differences are normal in triathlon races since most GPS’s devices do measure with an error margin and when it comes to placing a buoy, the distance can be doubled since swimmers must go out and back the extra distance.

Once done with the swim, the athletes need to overcome a very steep stairway with 72 steps to the top of the dam where the transition is located. A mix of false flats, long climbs and some technical downhills made this course one of the best of the Asian circuit as it was fully closed to traffic and road conditions were really good for most parts. There were roughly two long climbs on this out and back course, the first set was just out of transition, which means you will also need to climb before coming back to transition two, and the other set, the more technical section, was around the half way point.

None of the climbs were extremely steep, but the first set is relatively long at around four kilometers at 8.5% elevation grade.  A total of 1400m of elevation gain has to be climbed, which is more or less comparable to the elevation gain in Challenge Philippines-Subic. High performance athletes are still better on a triathlon specific bike, while beginners may be more confident on a road bike with compact cranks, which can help in better handling on the technical sections of the course.

Drafting among the age groupers wasn’t an issue since the undulating bike course and the swim rolling start paved the way for the the riding athletes not to be cramped up on the course.

The best bike split of the day was from France’s Antony Costes in two hours and fourteen minutes, Antony is one of triathlon’s strongest cyclists and has ridden closer to two hours in several occasions. If at that very high level this course makes an athlete fourteen minutes slower than a flat, fast course, for the typical age grouper, this difference is even greater. Avoid this race if your goal is a bike split personal best, however you will enjoy it if your goal is a challenging and diverse course.

If you think the bike course was hilly, the run course is even more challenging. The three loop of seven kilometers each, offers around two kilometers of flat roads running across the dam and back and all else is either up or down, with some of the hills relatively steep and long.

Mike Phillips had the day’s best run in 1 hour and 22 minutes, which shows the challenges of the run leg since most world class triathletes can run somewhere around one hour and fifteen minutes for the same distance on a faster and flat course.

If you plan to race this event, use the training tips provided by the winners of this event in their post-race video.