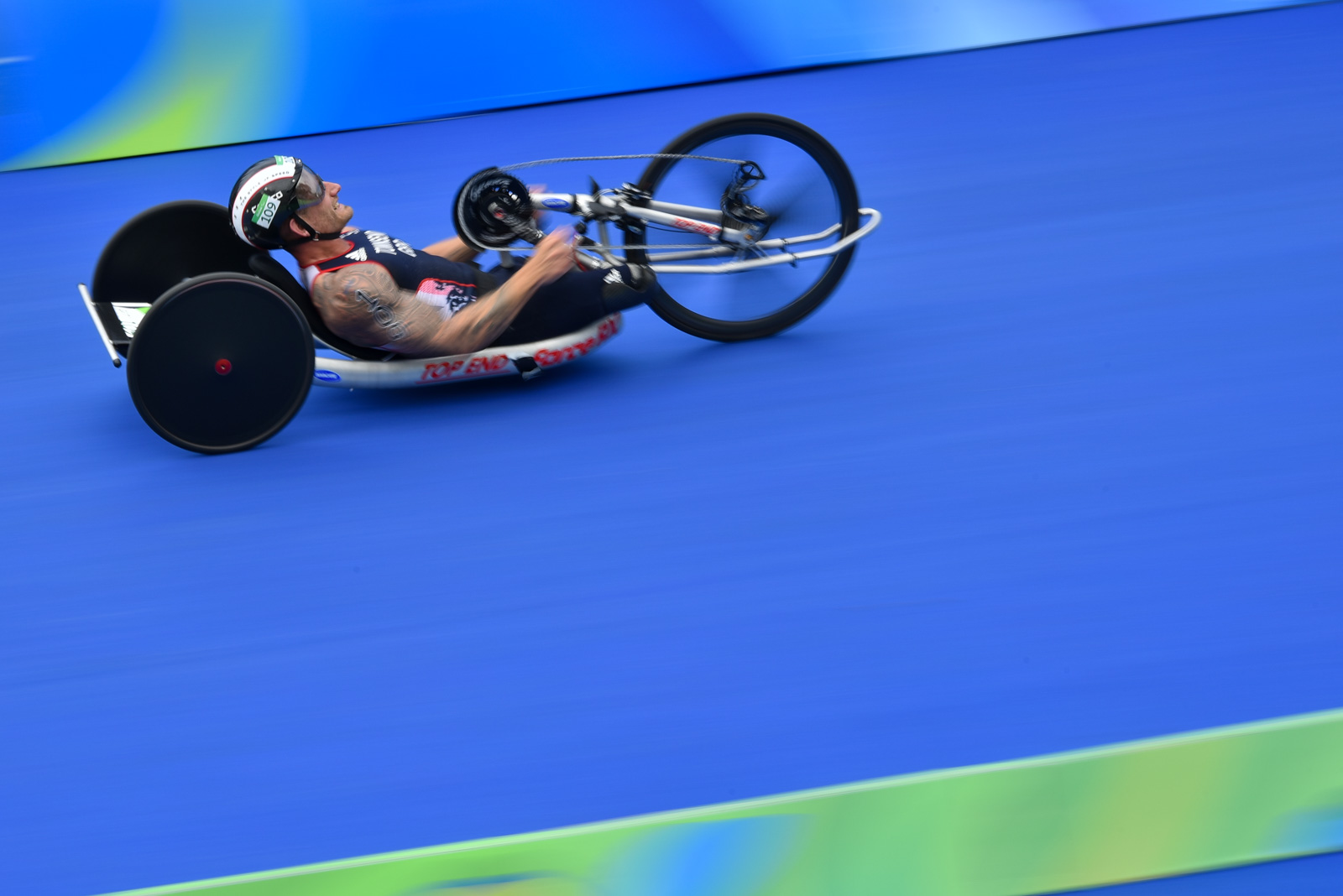 History was made at Copacabana Beach on Saturday, as the first-ever paratriathlon Paralympic champions were crowned. Martin Schulz (GER) in PT4, Andrew Lewis (GBR) in PT2 and Jetze Plat (NED) in PT1 craved their names in the history books as the inaugural paratriathlon gold medallists at the 2016 Rio de Janeiro Paralympic Games.

In total, seven different nations were represented on the three podiums from three continents. Martin Schulz (GER) became the first man to win a paratriathlon Paralympic gold medal when he put together a dominant performance in the men’s PT4 sport class.

“It is amazing. I just realized that today I win the gold medal and then the first paratri (Paralympic race) here at Copacabana. It is a nice place to compete, and it is a high part of my career. It has been what I have worked for over the last few years and I am very happy.”

After overcoming a huge time deficit after the swim, Schulz seized his moment on the bike and never relinquished the lead. Joining him on the podium was Canada’s Stefan Daniel (CAN) who earned the silver and Jairo Lopez Ruiz (ESP) who ended the day with bronze.

Showing his strength in the water, Great Britain’s George Peasgood swam his way to the lead over the 750m one-lap course. While he was followed shortly behind by Jose Abraham Estrada Sierra (MEX) and Maxime Maurel (FRA), Peasgood started the bike with a 30-second gap over the field.

Peasgood enjoyed an even further advantage, as heavy hitter Schulz was down by 52 seconds after the swim. Sitting in fourth place when he mounted his bike, it became crucial for Schulz to reel Peasgood in early. He did just that, hammering into the silver position behind Peasgood by the second lap, cutting the gap to half the time.

It was then on the third lap that Schulz finally caught the race leader and took his turn clocking through the timing mats first. Schulz entered the finish chute alone and seized the debut crown with ease, stopping to celebrate that he had become the first paratriathlon Paralympic Champion by more than 30 seconds.

Behind him, more battles bubbled up, as men were switching positions continuously throughout the race. While Daniel, who beat Schulz at the World Championship last year, proved no major threat in Schulz’s quest for gold, the young Canadian left his Paralympic medal all down to the final discipline. Trailing by over a minute after the swim, he didn’t make up any time on the bike, and was in fifth as he entered the second transition.

However, Daniel found his groove on the run, as he charged towards Peasgood and Lopez. On the final lap of the two-lap run, the silver was looking like it was going to go to Lopez when Daniel gunned it in a final effort for silver. Lopez followed shortly behind, finishing off the podium with bronze.

In the men’s PT2 sport class, top honours went to Andy Lewis in a stunning come from behind performance, while silver went to Italy’s Michele Ferrarin, with bronze going to Morocco’s Mohamed Lahna.

It was USA’s Mark Barr that made headway in the water, hitting the transition zone with a lead of over 40 seconds. However, a slower transition from Barr allowed Aussie Brant Garvey to not only catch Barr, but head out onto the bike in the leading position.

However, the lead was short-lived as Ferrarin put in a remarkable front-half bike, deleting his 1 minute, 28 second post-swim deficit to become the front runner after just two laps into the bike.

While Lewis was third out of the water, he was down by almost a minute. A strong effort on the bike kept him in contention, as he entered the second transition zone in fourth place, but it looked like Ferrarin was going to have a good shot of earning the gold medal if he could just hold on during the run.

The Italian ran through the first 2.5km loop in first place, but Lewis was ripping through the run and gaining on Ferrarin. Late in the run, Lewis finally caught Ferrarin, flying by him to win the men’s inaugural PT2 class by nearly a minute.

Lahna put together a consistent performance across the three disciplines to win bronze. Posting the fifth-fastest split on the swim, bike, and run, his effort to remain controlled in the race paid off, as other men burnt out from transition to transition. A final strong performance on the run was enough to keep the competition at bay for bronze.

As the last sport class to start, the Netherlands’ Jetze Plat put together the most dominant performance of the day, crushing the competition from line to line for the gold.

“It is historic, because it is the first time that paratriathlon has been in the Paralympics. And after three times being the European Champion and one time being the World Champion I am just very happy and proud of this performance. It was kind of a perfect day.”

As Plat put in the groundwork on the bike, gaining more of a gap after each lap, the battle for second came down to three men. Schipper paired up with Italian Giovanni Achenza, with Chaffey trailing and eventually being dropped. As the two entered the second transition zone, it remained unclear who would pull ahead for the silver.

All the while, untouched and unscathed, Plat started the wheelchair run still well in control of the incredible lead he had built. No man was able to come within a fighting chance of taking away his gold. As he rounded his way onto the blue carpet and into the finisher’s chute, he was able to cross the line and enjoy his moment for almost two minutes before the following competition made their way to the finish.

Behind him, compatriot Schipper sailed by Achenza, keeping him just far enough away to see the Netherlands’ go 1-2. Achenza crossed the line third and began a jubilant celebration.