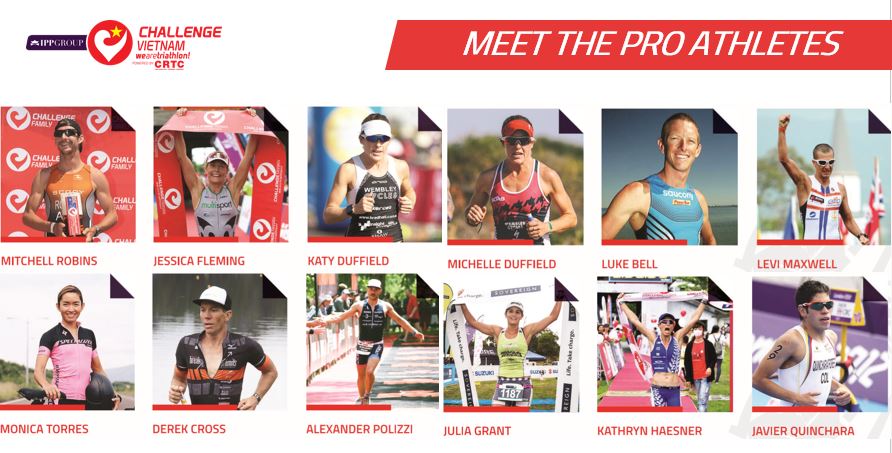 In a few days, the Challenge Family of triathlon races will be coming to Vietnam.   While the triathlon community in Vietnam is relatively new and small, it is growing fast and the Challenge brand has been busy putting up races around Asia.   This time, IPPGroup Challenge Vietnam 2016 (powered by CRTC) will take place in the beautiful coastal city of Nha Trang, capital of Khanh Hoa Province, and known as the beach capital of Vietnam.

The athletes will be in a treat as the course has been described as one of the most scenic in Asia.   Athletes will start race day with a two-loop trapezoidal swim right along the warm waters of Nha Trang Beach.  The bike course will have you riding along the coastline, and will have some rolling stretch on some parts.  It will be a multi-loop affair and expect some cross winds as it is a coastline course.  Finally, the run takes athletes along the coastline again, but this time accompanied with the sights and sounds of locals and tourists along the beach resorts.   Parts of the run route will be dotted with tree shade, and it is a welcome relief from the warm weather. The race favorites have to be Luke Bell and Mitch Robins, both from Australia.   Last year, Bell was the champion in Challenge Shepparton, while Robins also came up with a win in Ironman 70.3 Japan.  They will be looking for their first win of the season.   Joining them in the men’s field will be Levi Maxwell (AUS), Derek Cross (AUS), Alexander Polizzi (AUS), Carlos Quinchara Forero (COL), and John Leerams Chicano(PHL).  There are no clear favorites on the women’s race but Kathryn Haesner stands out based on her busy 2016 season.   She placed 3rd just last month in Challenge Iskandar in Malaysia.  Joining her are the Duffield twins, Katy and Michelle of Australia, Jessica Fleming (AUS), Monica Torres (PHL) and Julia Grant (NZL).

Athletes from more than 31 countries will join the Pro triathletes on the startline.   AsiaTRI will be there to cover the event and stay tuned for updates on our website and social media sites.

Video: How To Climb Like A Pro | Road Cycling Tips