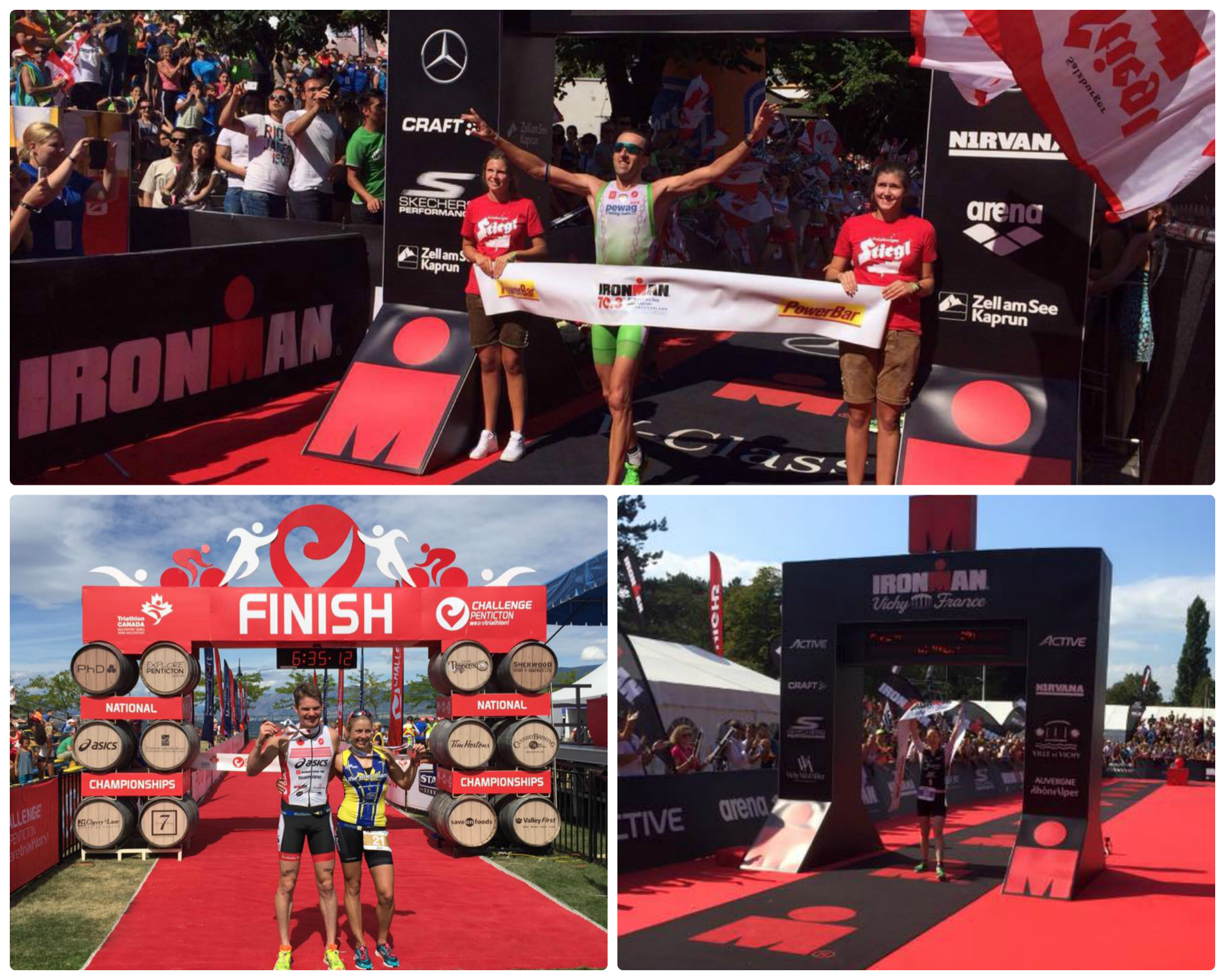 Symonds, who was running third after the swim, and trailed by more than five minutes to the American David Giardini at T2, relied on his race-best 1:45:00 30k run to take the win with a time of 5:32:39.  His amazing run split was 7 minutes and 34 seconds better than the 2nd best split, which resulted in a 5 minute 13 second winning margin over  Drew Scott (USA).  Countryman Jordan Bryden took third at 5:40:46.

Lehtonen and Vanhoenacker Fly in the Alps

Marino Vanhoenacker and the triathlon nation of Austria have a strong relationship. The eight-time IRONMAN Austria champ  came back to IRONMAN 70.3 Zell am See-Kaprun willing to celebrate another great victory after taking this race in 2014. Vanhoenacker was the last one to win here before the IRONMAN 70.3 World Championship touched down in Zell am See last year.

This time, the Belgian already had a pretty good start into the race few weeks after celebrating his 40th birthday. No doubt, Germany’s extraordinarily talented swimmer Lukasz Wojt hammered away in Lake Zell and exited the water in 22:27, almost 10 seconds ahead of the strong Swiss swimmer, Manuel Kueng. But Kueng reached T1 in front of a group of eight including Vanhoenacker who immediately took over the race.

After only a third of the stunning and extremely tough bike course in the Austrian Alps, Vanhoenacker made his move to the front and embarked on a fantastic solo ride. He got off the bike 4:28 over Wojt who could already hear the sound of another bike when he entered transition. Markus Thomschke (GER) was only 20 seconds down and moved into runner-up position after 7 kilometers of the run. Wojt started to struggle after that pass was made, and Brit Stuart Hayes ran into third very soon while Vanhoenacker kept his pace to take the title again.

Kaisa Lehtonen from Finland was the clear favorite in the women’s race after winning the IRONMAN South African Championship in April. The 35-year-old seems to be on her way to perform at her personal maximum at the IRONMAN World Championship on October 8, and people were allowed to see in Zell what she might be capable of in Kona.

Lehtonen came out nearly 3 minutes behind Brit Kate Comber in the water. She started out on the tough bike course together with five-time IRONMAN France champion Tine Deckers. Emma Pallant (GBR) was in between Comber and Lehtonen after the swim, and it took Lehtonen less than 20 kilometers to make up more than a minute on Pallant. After 60 kilometers, she eventually caught up with Comber and sailed away with the fastest bike split.

Thanks to the best run split by far, Lehtonen never had to look back. IRONMAN Lanzarote champion Tine Holst proved her bike strength, taking over second place on the final part of the cycling course. She started into the run about 30 seconds ahead of Pallant and directly into a hard fought battle with her British shadow. It was back and forth between those two, until Holst made the decisive attack for silver with 5 kilometers to go.

Catherine Faux and Harry Wiltshire took the first IRONMAN wins of their career at IRONMAN Vichy.

For more than six hours it looked a bit like a twin race at IRONMAN Vichy. British Harry Wiltshire and Italy’s Ivan Risti more or less battled the whole day side by side, before decisions were made on a hot day in France.

It was Risti who led men’s pro field out of the water after a 50:18 minute swim in a non-wetsuit swim. The Italian was followed by Wiltshire, Belgium’s Tim Brydenbach, and the 48-year-old German IRONMAN veteran Andreas Niedrig. The top four men ran into T1 in around 14 seconds, dropping the rest of the huge pro field by a minimum of two minutes.

Over the first 60 kilometers of the bike, these four leaders set the pace in a strong group before Niedrig attacked for the lead and started opening up a gap. Niedrig, a former long-distance star in Germany during the mid 90’s nailed an outstanding 4:22:29 bike split and reached T2 with a lead of more than 7 minutes. The chase group still included Wiltshire, Risti, and Brydenbach, two of whom would go on to gain a lot of time on the leader while Niedrig slowed down.

The “twin runners” Wiltshire and Risti first dropped Brydenbach a few minutes into the marathon and then chased down Niedrig. Through 10 kilometers of the run, the German leader got passed and the race seemed to start again. Well known for being a strong runner, Wiltshire set off onto a marathon battle with himself only after 16 kilometers. While the Brit ran straight to the first IRONMAN victory of his career, Brydenbach came back from a depth after 20 kilometers and passed Risti. Thanks to superb run splits, Trevor Delsaut (FRA) and Christian Brader (GER) stormed into the top five.

In the women’s race it was predicted that Celine Schaerer would dominate the first part of the race. The Swiss was ninth overall when she exited the water in 55:12, but the surprising element during the swim was Keiko Tanaka. The Japanese athlete was only 44 seconds behind Schaerer when she came out of the water in runner-up position while the other favorites lost five minutes or more.

Schaerer kept her pace on the bike, and maintained her lead for more than 90 kilometers. Then it wasn’t Tanaka on her heels, but 2013 IRONMAN World Championship age-group champion Catherine Faux from Great Britain. She made the pass, and it looked like she would let the hammer down early. Faux opened up a gap on Schaerer of more than two minutes over a few kilometers, but she Swiss fought back.

Schaerer came off the bike only four seconds behind the leader, with Tanaka in third place almost 12 minutes down. Spectators waited for a thrilling battle on the run, but the British leader was not willing to give any gifts in Vichy. After setting the fastest bike split, Faux ran away to establish her first ever IRONMAN victory. Schaerer proved that she was much more than just an uberswimmer, thanks to a strong marathon, taking silver after a stunning performance.

The two Americans Kelly Fillnow and Lauren Capone eventually moved into third and fourth place with the fastest run splits of the day.

The Father of Philippine Triathlon