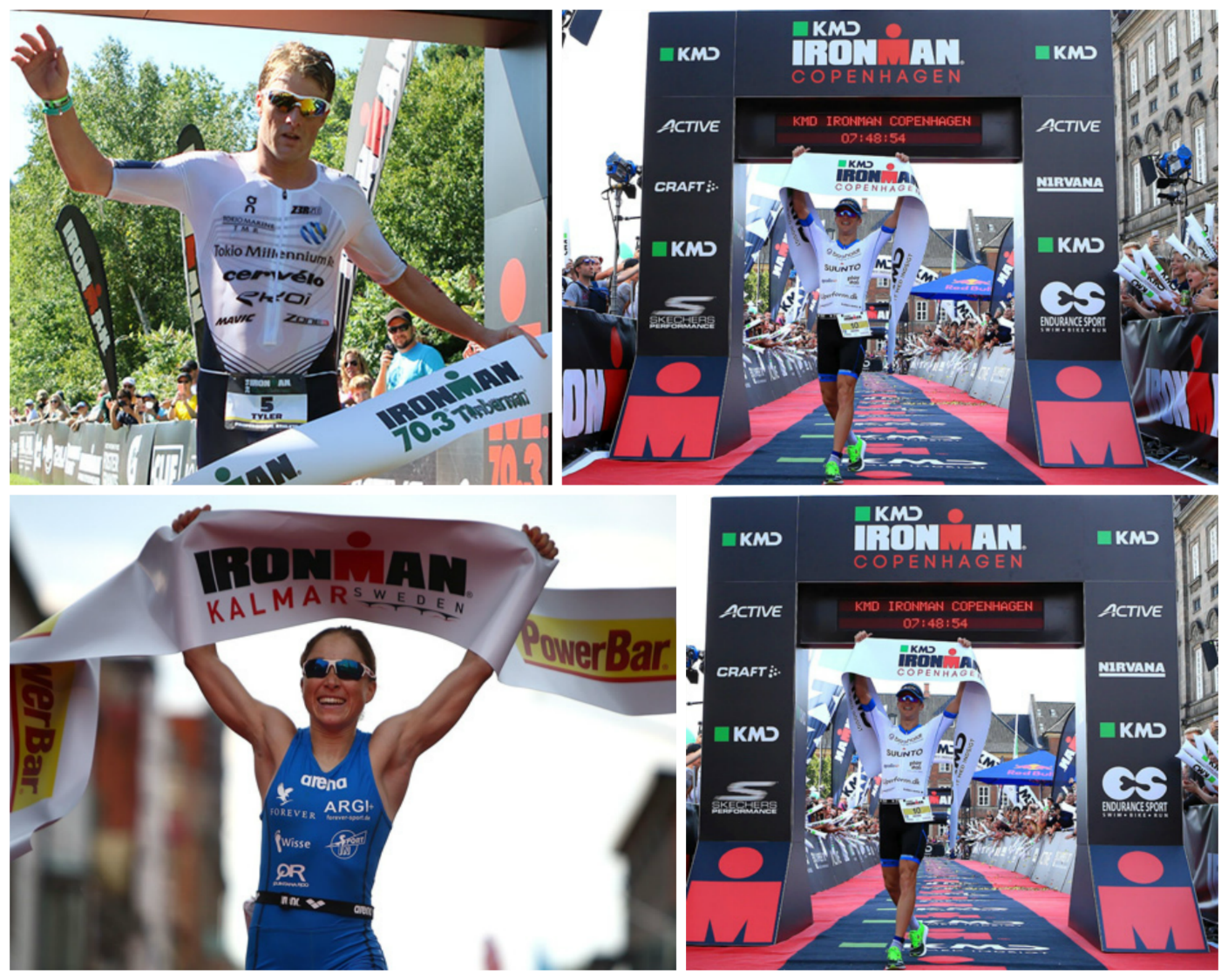 Tyler Butterfield and Mirinda Carfrae stake out their victories on the run in New Hampshire.

Antoine Desroches (CAN), Tim O’Donnell (USA), and Martin Bediran (USA) all emerged from crystal blue waters of Lake Winnipesaukee and run into T1 within seconds of each other.

O’Donnell lead the charge on the bike and built up a comfortable two-minute advantage over Michi Weiss (AUT), Justin Rossi (USA), Tyler Butterfield (BER), and Leon Griffin (AUS) at the completion of the first of two laps on the bike. In the second lap. O’Donnell was reported to have flatted and surrender the lead to Weiss while he repaired the puncture. Weiss lead the charge into T2 with Buttefield and Justin Rossi (USA) just seconds behind the Austrian.

In the first half of the run, Butterfield stormed past Weiss to take the lead. The Olympian motored his way to the victory with the second fastest run on the day over Weiss who grabbed second. Chris Baird (USA) laid down the fastest run of the day to lay claim to the final step on the podium.

Carfrae takes it on the run… again

Tisseyre showing no signs of her recent injury pounded her way to the front of the race early into the bike. Carfrae couldn’t match the leaders speed but worked her way into second place and was looking at a 4:11 deficit heading into T2.

Now in her element, Carfrae kept her cool and hit the run with a vengeance. Carfrae slowly reeled in Tisseyre throughout the run and caught the stubborn Canadian with three miles remaining. Carfrae’s patented speedy run allowed the Aussie to grab the finish line tape for the win. Tisseyre and Spieldnenner would cross line for second and third place finishes.

Chris Leiferman’s debut IRONMAN race nets him the win while Mary Beth Ellis takes her second win of the season at the Subaru IRONMAN Mont-Tremblant.

Who is this guy

Aussie Paul Mathews (AUS) was first out of the water and was accompanied by Eric Limkemann (USA) and Romain Guillaume (FRA) just seconds back as the trio scampered into transition together.

In rainy conditions, Guillaume was quick to head to the front of the bike with Paul Mathews (AUS) in tow for much of the first half of the leg. Behind the pair Jordan Rapp (USA),  Limkemann and rookie IRONMAN pro Chris Leiferman (USA) were anywhere from four to seven minutes back of the lead pair for the first 90 km.

In the second half of the bike, Guillaume put the hammer down and was rewarded with a five-minute lead on his closest rival. Late in the bike, Rapp reeled in the leader and reduced his deficit to under four minutes at the conclusion of the 180 km bike.

See also:  More than 60 Pros vie for The Championship, Challenge Family's Highlight of the Year

Heading out on the run it was apparent from the start that Guillaume was suffering and could only watch the top five competitors behind the him clawing into his lead at alarming rate. Rapp’s early pace earned him the lead at nine km, however the new leader had three other men breathing down his neck less than three minutes back and were all either matching or outdoing his run pace in the early goings. Behind Rapp, Leiferman was flying and reduced his nine-minute deficit quickly after the bike but was in uncharted waters as this was his first–ever IRONMAN.

Shortly before the half-marathon marker, Leiferman grabbed the lead from Rapp and quickly carved out out a small gap. Like a seasoned pro, Leiferman pounded out a consistent pace throughout the second half of the run and claimed the victory on the strength of the race-best run on the day. Rapp would hang in to claim a second place finish while Stephen Kilshaw (CAN) would complete the podium.

There was a lot less drama in the women’s race with Amanda Stevens (USA), who came out of the water first upon her return to racing this weekend after being sidelined with a foot injury she has been nursing since May. Mary Beth Ellis (USA) was second out of the water two minutes back while Laurel Wassner (USA) exited the water in third and looked at a five minute deficit.

Once the women were on the bike course Ellis proceeded to lay down the fastest split on the day by close to 10 minutes. The 11-time IRONMAN champion would carry over a 12-minute lead on Wassner and over 17 minutes on Amanda Wenndorff at the conclusion of the bike, setting her up nicely for her 12th IRONMAN win if she could hold off any hard charges mounted behind her.

Wassner managed to out-run Ellis over the 42 km by seven minutes but had fronted the leader an insurmountable time gap at the start of the run. Ellis was never under any threat up front and cruised the run and claimed the victory by a winning margin of 6:08 on Wassner.

An exciting race with many lead changes ends with two sub 8-hour finishes and a new course champion.

IRONMAN Copenhagen featured 43 male professional athletes in its first running as a male pro only race. A little fog blurred the sight on the swim, but the sunshine was out for the rest of the fourth annual race in the capital city of Denmark.

At 55km Raelert took over the leading position on the bike, but only 10km later Carvalho rode up to the top.  Many changes occurred in the lead spot amongst this group including Nilsson and Amorelli, but at 140km Raelert overtook them and didn’t give up his top position again going into T2. The top three on the bike consisted of Raelert, Nilsson, and Carvalho increasing a gap over the chasing group.

Raelert made it to T2 first but thanks to a fast transition Nilsson was the first heading out on the marathon. Until the half marathon split the top three stayed the same with Raelert in second and Carvalho in third. Raelert was unable to keep his pace, though, and Carvalho overtook him at 25km. While Nilsson ran the race of his life and increased the gap  between him and his chasers to over eight minutes Raelert fell back and Clarke came from behind running even up at the second position.

The crown of an incredibly exciting and fast race was taken by Patrik Nilsson who finished with a sub 8-hour finish in 07:49:18 and set a new course record at the IRONMAN Copenhagen. Will Clarke also managed to secure a sub 8-hour finish in second place with a time of 07:59:31. The podium was rounded out with Fabio Carvalho in third place in 08:07:10.

Kristin Möller dominates on the run and leaves her competition in the dust.

Cloudy skies, cool temperatures, and almost no wind made for perfect conditions as the 2,200 athletes entered the fifth edition of IRONMAN Kalmar, Sweden.

Today marked the first time the race was exclusively pro women and age groupers.A small but strong pro field started the race at 6:45 a.m. at the harbor of Kalmar while the age groupers followed at 7 a.m in a rolling start. Lucie Zelenkova (RSA) took over the lead in the water from the beginning and after a strong swim she exited the Baltic Sea in a time of54:03. She was first on the bike and constantly increased her leading position. Zelenkova was chased by the young Caroline Lehrieder (GER) and Kristin Möller (GER) but she kept pushing hard and didn’t give up the lead until 150km into the bike when Lehrieder overtook her. The German reached T2 first with a 05:01:25 bike split. Zelenkova came in 06:32 after Lehrieder. Möller was 16:16 back from the leader.

On the marathon, Lehrieder kept her top position until 22km. Möller showed her running strength from the very beginning and soon was the fastest runner on the day. She minimized her gap and overtook Lehrieder shortly after the half marathon split. Lehrieder tried to keep up, but Zelenkova came from behind and took the second place at 34km. Möller finished an incredible race in 09:14:39. Lucie Zelenkova grabbed second place in 09:21:31, followed by Caroline Lehrieder rounding out the podium in 09:24:30.