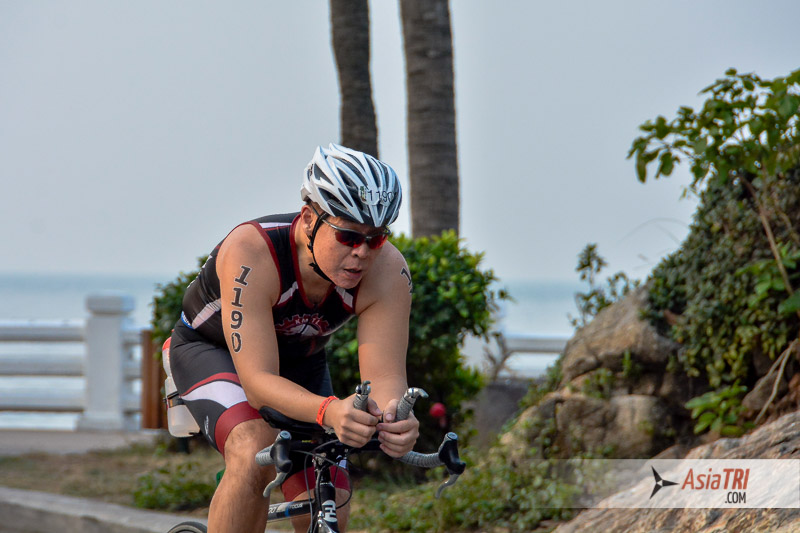 Every year a few weeks ahead of Kona all triathletes start to get excited about the big show, wondering if one day they could be a part of the Ironman World Championships as competitors themselves.

Having raced it as a professional triathlete and having worked with many athletes who have qualified for Kona in the past few years, I have found there are some very clear rules—apart from hard work—on what it takes to earn a spot.

This article will cover both how you should pick a course profile that will provide you a better chance of qualifying as well as a rundown on what to expect at most Ironman qualifiers around the world.

When it comes to Hawaii, there is no easy way—you have to risk it at some stage. If you are fit enough to race with qualifying for a Kona slot as your goal, it is very likely you have done an Ironman before, so “simply” finishing is no longer a goal. That makes it easier mentally to take more risk during an Ironman, even if it doesn’t work out as planned and you bonk at some stage of the race.

If you are a first-timer, then your goal is to finish. Of course there are secondary goals, with the most popular one to run the run, and your whole training and racing should be focused on that objective.

A very common profile of triathletes is the strong biker with a mediocre run. If you want to qualify for Kona, we are talking about high-performance age group triathletes. If running fast isn’t for you, if for any reason you feel that running 3h30 or quicker isn’t possible, but you feel great on the bike, you might do better by riding close to 5h and then do your best to run 3h40-50. With those splits you will very likely break 10 hours, which puts you very close to a Hawaii for most age groups in several races with the exception of the super-fast races in Europe or those with a stacked field.

Of course your training will have to be tailored to that. You will need to develop an extremely efficient run technique and, of course, bike strength.

The swim is roughly 10 percent of an Ironman. Why bother with the hard work necessary to go from an 80-minute swim split to 65 minutes? In fact, it could take a year of swim focus to improve those 15 minutes—you might think that within that timeframe you could improve more in your bike or run splits.

Think again. Once you are fit and skilled enough to swim 65 minutes, you are not only saving time but starting the bike and run much fresher, with a lower heart rate and less muscle fatigue which will translate into faster bike- and run splits.

Another benefit is that you are around much fitter athletes during races. There is no need to waste energy on overtaking hundreds of riders which can be physically and mentally stressful. Not to mention that you have more space in the water and experienced swimmers near you which usually makes the swim leg less stressful as everyone is confident and knows what they are doing.

Pacing is another benefit of being a front-of-the-pack swimmer. You save a significant amount of energy when you are “riding with” a group of steady athletes instead of playing catch-up.

When it comes to Kona, every second counts. I have seen a number of athletes who missed out on a slot by a couple of minutes. They might have gone faster by paying more attention to details before and during the race.

The old saying “Never try anything new on race day” is getting more and more important as the triathlon industry throws all those new technologies and gadgets at us. Walking around the Expo days before an Ironman and seeing all those items that you don’t own yet but are supposed to make you go faster can be very tempting. Don’t give in. An extreme example comes from one very fit athlete who was reduced to walking the marathon due to blisters caused by his brand-new compression socks.

First of all, you do NOT need the best and most expensive equipment to qualify. In fact, in many situations you might go faster if you choose the cheaper options, since that what is usually designed for the world-class professional athlete may be out of the age grouper’s range of fitness or skills to handle.

You should have a very straightforward nutrition plan for race day. It has to be something you have tried and tweaked over many races and training sessions. Stick to it—the last thing you need is slowing down as a result of getting your nutrition wrong, which can cause stomach discomfort or lack of energy, which will in turn result in a slow day even when physically you were very fit.

As I’ve written in one of my articles before, there is no perfect Ironman race. Something won’t go as planned, period. That said, the more experience you have in dealing with new situations, the easier it will be for you to pick the best choice for each surprise.

If you think you are still a few years away from qualifying, use this time to get to know yourself better, race different courses and conditions, see what suits you and what doesn’t—be aware of your weaknesses and work on them.

However, if qualifying is something is a realistic possibility for you, do a tune-up race in preparation for the big day—ideally a half ironman event 8-10 weeks out on a similar course (consider wetsuits, ocean or lake swim, hills on the bike and run, and weather conditions). Use the same equipment, strategy and nutrition as you plan to do in the qualifier race, even if by doing that you might go a bit slower than you could by racing according to the 70.3 distance.

Understanding Ironman races around the globe:

Now that you have an idea on what to consider when picking a course that will suit your strengths and maximize your chances of qualifying, you also have to understand the specifics of racing on each course and part of the globe.

As discussed earlier in this article, finding a course that suits your strengths and won’t make you lose too much ground on your weakness should be priority number one. Once you have picked the races around the world based on that, consider number of slots, level of competition and travel time, in that order.

Slots per race vary, from as few as 30 to as many as 80—that makes a huge difference as, depending on your age group, you have a chance even if you place 15th or so if you are in the M40-44 age group for example and are lucky that some athletes ahead of you will turn down the slot. On the flipside, races with fewer slots make it much tighter; unless you are in the top 5 of your age group, your chances are slim.

Level of your competition

Certain races tend to attract certain types of athletes. If you want to qualify at the fastest ironman on the planet, you better be ready to race very, very fast. Ironmans in Europe, with the exception of a few races, are known to have very high caliber athletes, since the locals are in peak shape at that time of the year and they prefer to race their “home turf” due to logistical reasons. Showing up at Ironman Frankfurt, which is the European Championships, to qualify for Kona will require a perfect race regardless of your level. It is preferable to choose races where historically finisher times are slower.

Apart from the obvious fact that many athletes can’t afford too many days off work or away from home, time zones are also important when racing such a long event overseas. The general rule of thumb is a day of rest for each hour of difference; if you can’t afford that time, make sure you are a good traveler otherwise it may be a wasted opportunity.

Another detail to think about is the time of the race within the year and the qualifying season. Races later in the season are usually less competitive such as those late in August (Canada and Japan come to mind), as most of the very fast athletes prefer to qualify earlier in the year so they can afford to take some time off, recover from their efforts, before building for Kona again. The late-season races are in a way a “last resort” for people trying to qualify, as they need to back it up with Kona in about 5-6 weeks.

So, which race to pick? See the Pros and Cons of the most famous ones below:

Ironman races in the Americas:

Ironmans Brazil and Mexico do offer a moderate amount of Kona slots but the competition may be slighter faster than in North America and Canada. In Brazil, for example, if you are a man between the age of 30 and 40, you may have to break 9h30 to have a chance.

As of the time of writing, we only have an Ironman race in Japan when it comes to Asia. Local athletes aren’t as fast as those in Europe or Australia, and the late time of the race also makes this slightly less competitive since most of the top athletes prefer to race earlier in the year so they can recover and train specifically for Kona.

On the flip side you have races in Australia that are very different than Japan. Busselton and Melbourne are probably among the hardest races in the world to qualify—they are early in the season on fast courses with fast athletes. If you are in a competitive age group, you may go 9h15 and miss out on Kona. They are great for PBs, but for a Kona slot only if you are a very experienced and fast triathlete. Ironman Cairns and Port Macquarie on the other hand offer less competitive fields, and slower races and courses in general, increasing the chances of intermediate level triathletes.

In Europe you have got everything. From the easier races to qualify such as the UK and Wales that are later in the year, on slower courses with slower competitors, but they can be very unique when it comes to course profile; you better be ready for a lot of ups and downs, both on the technical front and the bike course. If you live in a flat area and aren’t used to technical rides, this may not suit you.

The traditional European races such as Frankfurt & Austria are also a mini version of the world championships—don’t be surprised to see several athletes breaking nine hours if you are in a competitive age group.

You may also find extreme conditions in Europe that may fit like a glove for very few athletes: Ironman Nice for very technical and climber-bike riders, or Ironman Lanzarote for strong climbers who won’t need to be as technical but will need to be able to handle the heat.

With the information above, you have now a clear map for your Road to Kona. Unless you are a very experienced and fast ironman triathlete with several Kona starts already under your belt, picking the right race will increase your chances and make the dream a reality. And make sure you back that decision with specific, smart and hard training.

Good luck and hope to see you on the start line in Kona one day!

Profile: The First Filipino Finisher of the Norseman Xtreme Triathlon