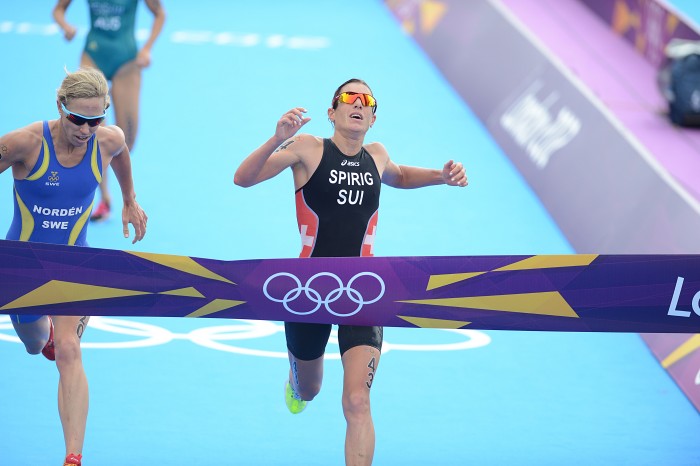 by Vinicius Santana – ironguides.net
On August 4, 2012, we witnessed Swiss Nicola Spirig become Olympic champion.   I was not surprised, because I have been following his career since 2006 when she spent time in Brazil Dhama training center in San Carlos. At that time, we trained together under the care of Australian coach Brett Sutton.
In 2007, our training camp moved to Thailand, where again I was able to observe closely the work that Nicola did and what she sacrificed for an Olympic medal.  In the 2008 Beijing Olympic Games, the goal was nearing but far from being complete. She finished in sixth place, but that finish served as the bigger motivation and she managed to win the race in  the 2012 London olympics.
Take a ride with me as I give you an inside look, some curiosities, tips and possibly surprises that are part of the routine of a gold medalist in triathlon. As we have no usual access to this information, it is normal to look at these “super” athletes as if they were from another planet, as if they do a different training routine, and have a very complicated life that is always focused on high performance.
Finally, I try to answer the question: what is the secret of an Olympic medalist? Is there any special technical training, nutrition, sports science applied in routine equipment?

Dealing with Pressure
It is common to see athletes who are favorites for an Olympic race succumbed to the pressure and not perform on what is expected from them.  For Nicola, the first step is to treat the Olympics as if it is just like any other triathlon race she participates in.   Thinking of the windfall that comes after an Olympic success just adds unnecessary pressure.  The fame and financial gains will be temporary, but having his friends and family to support her, win or lose, keeps her feet on the ground.  To get an idea, Nicola did an Ironman 70.3 two weeks before the race in London, and even swam a long set, a day before her Olympic race.   Treating it as one  of the races keeps her grounded and loose, and not pressured as if it is the only race of her life.

Secret in training
And the magic formula? That secret number in the hard running sets that was responsible for his victory?  Nothing complicated like a series of data taken from heart rate monitors or power meters, much less periodization training generated with graphs and formulas. Training is simple, what was done yesterday and what we do tomorrow is what will determine what will be done today. Two or three shifts of training per day, with a few rare days of rest.
His periodization is based on results and upcoming events. How about we start an 8-week block focusing on swimming to fix that slow start we had in the last few races? Or weekly intervals and many sets of 200 meters on the track, getting prepared both physically and psychologically for a sprint on the schedule? Just lots of common sense, critical analysis and minimal numerical data.
Of course, some details are unknown and unfeasible for the reality of an age-group triathlete, such as double or even triple daily workouts in each category. One day in three shifts, for example, in the morning it would be cycling with sprint job. At lunchtime, a number of swimming focused on strength. In the evening another cycling workout with Time Trial intensity.

There is everything: training long, short, strong and easy. The combination, of course, help the quality of the week, but the worksheet details are only part of the structure of a medal.

Routine
And the secret in the routine, what would it be? Sleeping in a hypobaric chamber? Tailored supplements? On the contrary, the routine is more akin to what an amateur athlete would do.
In San Carlos, she stayed in a hotel apartment just like anyone, and eat barbecue with the group on weekends. In Thailand, her diet was based on rice with chicken. The training started at seven in the morning and ended at six o’clock. This is not very different from the hours of a full-time job in an office, except for the weekends that are usually long training or racing in an event.
Spirig,  a world junior champion in 2001, has not only a natural talent, but possesses discipline and dedication required to work more than ten consecutive years for an  Olympic medal. Along the way, injuries happened just like when she had a painful shin injury in 2006.  As evidence of her mortality, an Olympic champion also has its physical limitations and mental challenges.
The secret?  Simple and dedication to training over the years, with no distractions, and always focusing on the main objective with patience.  It certainly worked for Nicola Spirig.

Video: Fix A Flat Fast – How To Change An Inner Tube In Record Time