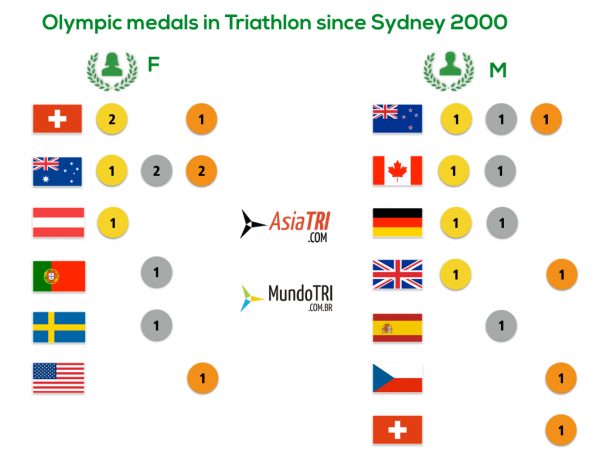 In recent weeks, our special series of articles showed the most important facts in the 4 Olympic Games in which the triathlon was present: 2000 Sydney, Athens 2004, Beijing 2008 and London 2012.

Looking at the list of medals, we can see a large area of two nations in female Switzerland and Australia. Switzerland is the only country with two gold medals: Brigitte McMahon was the first Olympic champion in Sydney, and Nicola Spirig won over Swedish Lisa Norden in the final sprint in London. The country still had the bronze Magali Messmer in 2000.

Australia is the country with more medal in Triathlon, 5, and all female. They managed medals in all editions. Emma Snowsill now Emma Frodeno, won gold in the same year that her German husband won in 2008. In that race, Emma Moffatt was bronze. The legendary Michellie Jones, also of the Hawaii Ironman champion, silver was at home in 2000. Loretta Harrop was also silver in Athens. In recent games, Erin Densham won the bronze.

Kate Allen secured the only Austrian medal of gold in 2004. The incomparable Vanessa Fernandes, then absolute favorite, took the silver for Portugal in Beijing, the same medal won by Lisa Norden four years later. The United States, which is the favorite for the 2016 Gwen Jorgensen, have only one medal: bronze for Susan Williams in Athens.

Among men, the most successful nation is New Zealand, with three medals, one of each placement. Gold came in Athens with Hamish Carter, one of the greatest triathletes of all time. The silver went to Bevan Docherty in the same race. He also won the bronze in Beijing. Only he and Canadian Simon Whitfield won multiple medals. Simon was gold in Sydney and silver in Beijing, putting Canada in second place in the overall picture of the male.

The third dominant force is Germany, who took gold in Beijing via Jan Frodeno. He is now the only Olympic champion who has won the Ironman and Ironman 70.3 world championship. Stephan Vuckovic was silver in Sydney 2000. Near Germany is Britain thanks to the medals Bronwlee brothers won in London 2012.  Alistair was gold and silver for Jonathan.