Profile: The First Filipino Finisher of the Norseman Xtreme Triathlon 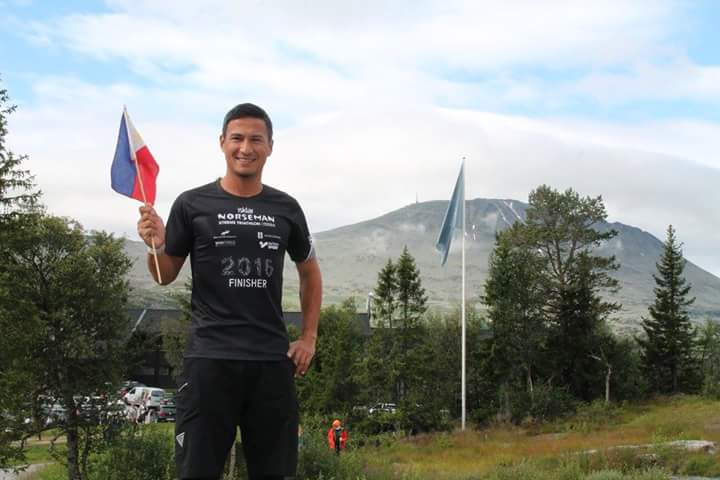 Omar Paredes is an age group triathlete and coach of the Herbalife Triathlon Team in the Philippines.   Paredes was the first Filipino to join and earn the coveted “Black Shirt” (awarded only to the first 160 finishers of the race).

Norseman is a long-distance triathlon held in Eidjford, Norway with a 3800m swim, 180km of cycling and a 42km run. When athletes cross the finish line, they have climbed 5000m of altitude, while racing all day in near-freezing temperature.  It is considered one of the toughest iron-distance race in the world.

On starting to TRI:

I started swimming in high school, around 1993. I took up triathlon around year 2000, after I graduated college. A friend just prodded me to try it, 16 years later, I’m still here.

I remembered my first race, in 2001, a national age group sprint competition in Ayala Alabang. I had no problem swimming, but I was no good when it came to the bike, then I literally walked on the run. It was a terrible first race, but something in the sport challenged me. So I decided to get better. I joined a cycling team based in San Pablo City, and that’s how I became better cyclist. Then I joined a tri club based in Los Banos, The Trantados Triathlon Club which I represented throughout the earlier parts of my triathlon journey. But in 2010, I was very fortunate to be taken in by Herbalife Philippines as one of their brand ambassadors. I’m still with them until now and I can’t see myself going anywhere else.

Among the 3 disciplines, it’s the run that I’ve come to love the last. But in the past year, I’ve been working a lot on my run, especially for Norseman, knowing that there are a lot of hills on the run part and that I’d be coming from an equally challenging bike leg, so I really worked hard to develop stronger run legs.

We’ve heard about Norseman that it’s a bucket list race. Then we read stuff about it on the internet and social media. My wife was following their page on Facebook, and when she learned that the lottery was open she submitted both our names. She joined in the last day, in the last hour, thinking “what if” – without even telling me. When I got home from work, she mentioned to me in passing that she joined the lottery and I didn’t take it seriously. I just remember telling her, “gusto mo bang magpakamatay?!” (do you want near-death experince??) not really thinking any of us will be chosen – anyways there has never been a Pinoy to go there, so I thought racing there was a remote possibility.

Well, not until the results were revealed. My confirmation email came a day before my birthday last year, November 8. I was so petrified, I don’t think I was able to celebrate my birthday, haha. It was actually a few days after that I came around and really accepted the fact that I was going to race in one of the world’s toughest triathlon races.

I started training progressively. Knowing that there will be a lot of climbs on the bike and run, I focused on hill training. The bike course was through 5 mountains in Hardangervidda (total elevation gain of 3,072m) in very fickle weather. Then there was the 42km run up Mt. Guastatoppen with an elevation gain of 1,923m. The swim was the most challenging part for me. I live in Los Banos, Laguna – the land of hotsprings, haha. The waters in Norseman is as cold as the water right out of our freezer, no exaggeration. So that was my major fear. My wife and I stayed at Eidfjord 2 weeks before the race so I can somehow acclimatize and swim in their waters.

The cold weather, for me, was the biggest challenge going into the race. I was very lucky to have found a good adviser, Rune Stroem of Polo Tri Team who also raced and finished Norseman in 2014. He gave me a lot of insights on how to tackle the race, logistics on when to travel, where to stay, best way to reach Eidjord, even lent me racing gear and apparel for Norseman’s notoriously changing weather conditions.

I got the black shirt, finishing #138.  The swim leg though, was the most defining moment. I’ve always said that I’m most comfortable in the swim, but during Norseman, it was the total opposite. On that same ferry, about to jump for my life. The moment I hit the water, I was on survival mode. It was coldest water I’ve ever swam in, period. I’m not joking when I say I thought I was gonna die on the swim. It took a while before I found and settled into a good pace, but I’m very glad I did. On the bike, the first 40km was manageable, up to a town called Dyranut where it got very foggy at 5 degrees with cold winds. Then approaching Geilo at 90+km it rained all the way to 140km. My hands were numb due to cold at this point and I had trouble going down the hills. I stopped to eat and changed clothes cause going down was too cold for me. The last monster climb at 140km was so hard, I was too tired and could not pedal anymore. So I needed stop again and eat. I needed more fuel to continue and thank God I was able to recover in time for the last downhill.

When got out of T2 and into the run, I was told that I was #146 in the standings. I was very fortunate to have found a buddy, Billy Vosnakis from Greece, to pace with. He’s been there before, he got his 3rd black shirt this year, so I knew I was in good company. The first 25km of the run was relatively flat. There was an aid station in about 25th km, and they told me I was #151 so I dug deeper going up. Everyone was struggling when it came to the Zombie Hill, right before the 32nd km where the checkpoint is (and where we got to find out if we were within the first 160 athletes who can continue up Mt. Gaustatoppen).

See also:  Video: How To Not Get Dropped | GCN's Road Cycling Tips

When I finally made to the 32km checkpoint and they told me I can continue to the top of the mountain, I just broke down in happiness and relief. Finally, THE BLACK SHIRT. It was still a long way to the top of Mt. Gaustatoppen. My wife came with me as support and just walked up. There was a point when I had a hard time walking. I only packed jackets bonnets and gloves for the climb, but I didn’t bring thermal pants, which was pretty stupid haha. So I climbed with just my trishorts, and when we reached the top, it was 0 degrees, my legs just gave up when we reached the top. When we reached the finish line, I was very emotional – I was crying in agony, in happiness, pride, and in relief.

SO YES, THIS IS, BY FAR, THE HARDEST RACE I’VE DONE.

On being the first Filipino to join and finish Norseman:

First, I am truly overwhelmed and humbled by all the attention my crew and I are getting. We set out to do this race, without any certainty that we’ll even finish, many times even fearing for my life. But now that everything’s done and dusted, I just want to express my gratitude to everyone who helped us along the way. To God, to all my family and friends who helped, prayed, and cheered for us. I can say with all my heart that this race is not just my race, it’s a race I share with every single person who helped me along the way. I think extreme races like Norseman challenges us to think and do things we’ve previously thought to be impossible. I think it’s a huge achievement. But as in any long distance race, more so with the extreme ones, we have to give it the respect that it so much deserves. If you’re one of the lucky ones to be given a spot in Norseman, do your best to prepare well for it. It’s going to be tough, you’re going to be in so much pain, you’ll spend an unreasonable amount of money, but if you’re a true blue crazy tri nut, you’ll still want to be back the next year for more.

Triathlon for me is a lifelong journey. It’s not just a sport, it’s my lifestyle – our lifestyle, since my wife is also an avid triathlete. Long term plan is to just keep doing what we’re doing. We’re both age group athletes, so there’s the matter of trying to balance work, family, and our passion in our sport.

Video: How To Take Your Bike To The Next Level – Pro Bike Tips