The Father of Philippine Triathlon 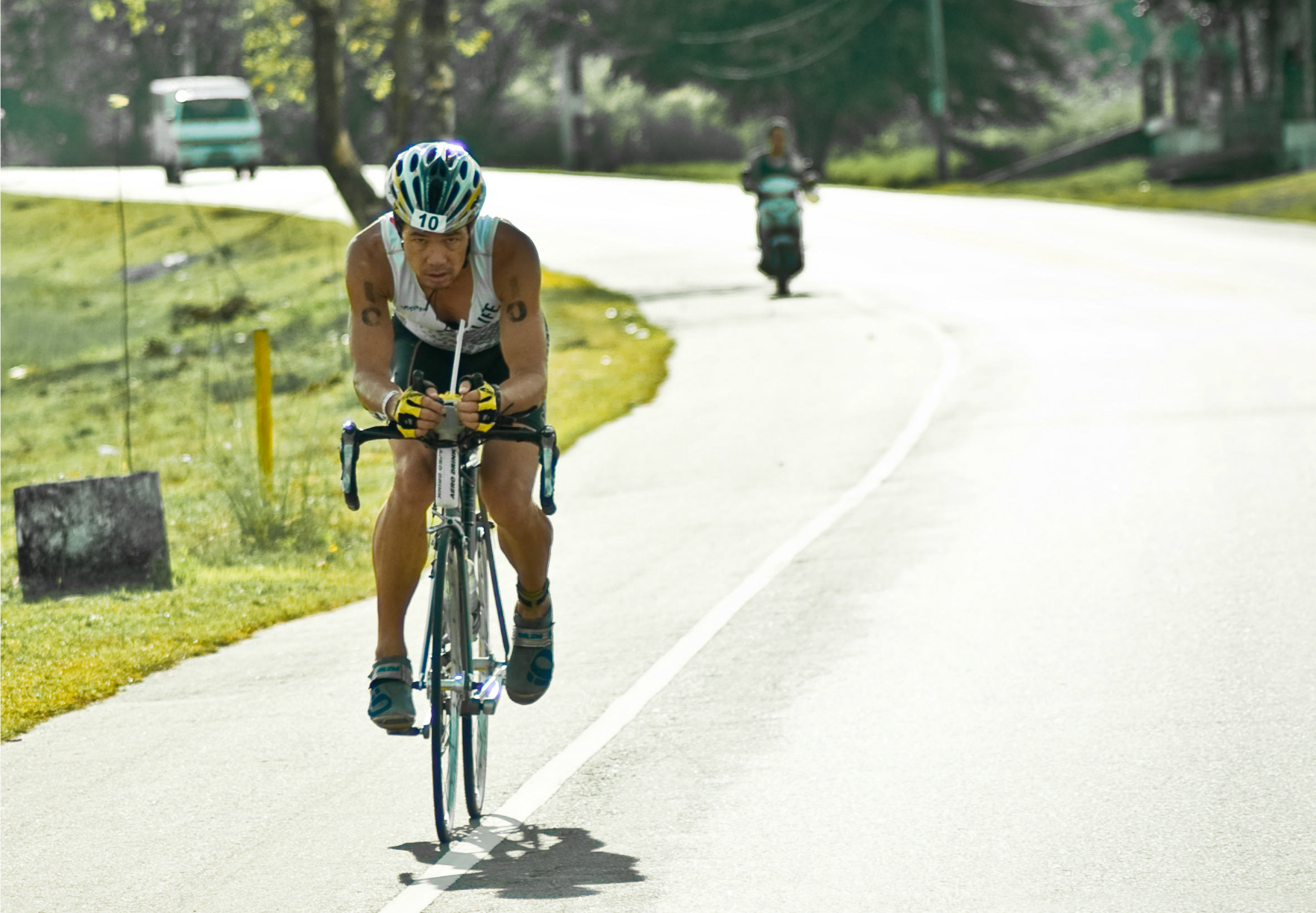 “The Legend.”  This is what Pinoy triathletes call him.   At age 53, Frank Lacson, widely acknowledged as the Father of Philippine triathlon, is not showing signs of slowing down.   Finisher of 147 triathlons, he is considered to be the very first Filipino triathlete.  Just like the typical triathlete, he regularly posts his training regimen on social media.  But unlike most who will post a lengthy training diary, the posts we get from Helty Almusal, his profile name which means “Healthy Breakfast”,  are usually  one-liners:

Boring as they may it seem, it reflects on the man who has let his triathlon races and podium places do the talking.  All 147 of them.  We take a look at  his beginnings and what he is up to nowadays.

Back in 1982 when he was working as a fitness instructor in Los Angeles, California, he chanced upon a Sports Illustrated article about the Ironman World Championships in Hawaii.   It had tri legend Dave Scott on it.   “Well, I could do this too.”  Frank recalled.  He was only running for cardio back then, but the magazine feature inspired him to do his first triathlon: “It was a bike-swim-run.  If I recall, it was an 8-mile bike, a 15-meter swim and a 2.5-mile run.  It was kind of a wild wild west when it came to distances back then in the United States.   The sequences were not fixed too. Organizers even threw in other sports such as canoeing or even horseback riding in the mix and called it a tri, haha.”

When he migrated back home in the Philippines in 1991, triathlon events in the country were just starting to be organized.   And when a handful of local newbie triathletes and sports enthusiasts successfully convinced corporate sponsors to be involved in those events,  Frank got to join most of them too, even if races would only be held twice or thrice a year.  While triathlon was in its infancy in the Philippines, he has been doing it for years in the US.

“One of the first races which I incidentally won had 25 participants who were just a mixture of swimmers, cyclists and runners, but no triathletes.  I would trail the swimmers first, beat the swimmers on the bike, but the cyclists who were left in the swim, would outbike me…but by the run leg, I would outrun the bikers and would be leading by myself…the runners would have too much deficit that they will be really behind me, haha.”

By 1992, he had won the inaugural Philippine Triathlon National Championships.

He became a member of the Philippine National team shortly after that, and stayed on the team for 5 years.  His best result was during the 5th Asian Triathlon Championships where he achieved his personal best with an Olympic distance time of 2:07.

Helping in managing a beach resort in his hometown, Subic, Zambales, Frank always relishes the opportunity to train in Subic, which he considers the Triathlon Mecca of the Philippines.  He typically trains each sport 3 times a week, but usually adds another open water swim session.  “I live in front of a bay so yes; my favorite is the open water swim session.  I enjoy hilly bike rides at threshold pace and the easy pace runs that help you focus on form.”

His stature in the triathlon community has also helped some non-profit organizations further their missions, particularly involving marine life.  When he is not swimming for a cause, he can be seen volunteering in triathlon events when he is not joining.  “The sport has been really good to me.  It is just proper to pay it forward.”

Frank has always been a winner in every age-group category he has entered.  In fact, he has now won 6 age-group categories, a record in the Philippines.  He has won all of that in his trusty titanium road bike, which he has used for 20 years.  After years of shunning away advices that he should go get a tri-specific bike, he was recently seen sporting a new steed, courtesy of a local bike sponsor.

See also:  Video: How To Climb Like A Pro | Road Cycling Tips

“Equipment wise, obviously, I’m more used to old school with the it-is-all-in-the-legs” mindset.  I know technology marvels can truly make a strong triathlete’s life easier in regards to performance and results. But I would emphasize on achieving strength first before the speed suits, the power meters, the aerodynamics and the lightweight running shoes. Through circumstance, I’m glad an old school road bike has thought me to ride a Tri-bike faster.”

The triathlon scene in the Philippines is extremely different from the one he used to join back in the early 90s.   “Back in 1991, I joined an event where we used bamboo baskets  in the transition, and there weren’t racks too, so we just leaned our bikes on wall.”   Now, Frank is ecstatic that there are races in the Philippines all year-round that if you joined them all, it might leave you penniless or bonked out.

Being a health and fitness advocate, he is definitely happy that Filipinos has caught on the triathlon bug.  “The Philippines is host to the biggest triathlon event in asia, and it has come a long long, way from the early years when triathlons where considered a success when a hundred people showed up.”

There are no immediate “A” race coming up for Frank, with his last race being Ironman 70.3 Cebu,  but the triathlon lifestyle is just already implanted inside of him, day in and day out.  The little fire that started by reading a magazine feature back in the early days, that flame is now an inferno that keeps on burning.

“To remain and stay inspired by the success of others so as to always seek a better you until you may inspire others to better themselves as well.”  He lives by these words.

But his triathlon outlook is always this: “Get faster not older!”

More in Featured
Are Aero Bars Worth It? The wind tunnel answer
January 15, 2015