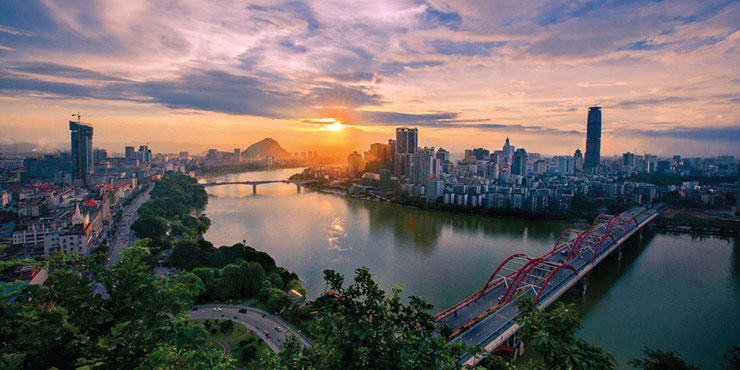 “The development of races in China continues to be a priority for us and Liuzhou, Qujing, and Chongqing will provide three new fantastic race locations for our athletes,” said Andrew Messick, Chief Executive Officer for IRONMAN. “There is a budding group of athletes throughout China looking for more opportunities to compete in our events. Combined with great tourist destinations, these events should provide experiences athletes around the world will enjoy.”

“Leveraging the synergies of IRONMAN and the other Wanda Sports businesses, we add further value to the Chinese sports landscape,” said Philippe Blatter, President and CEO of Wanda Sports Holding. “With Chinese consumers becoming more active and seeking unique personal experiences, there is a great demand to participate in IRONMAN races as the premium series in the endurance world.”

Liuzhou, also called The Dragon City, belongs to the northern edge of China’s subtropical zone, in the eastern Yunnan province. With a population of nearly four million, this well-developed, modern city of industry is rich in culture, history, and natural beauty. Encircled by green mountains and embraced by the Liu Jiang River, Liuzhou is also known as having “The World’s Best Natural Bonsai” and has been praised by China’s best poets. The landscape is a mix of rolling hills, mountain peaks, caves and unique karst scenery, making it an ideal base for exploring various quaint villages in the area.

The IRONMAN 70.3 Liuzhou triathlon, to be held on April 1, 2017, will begin with a 1.2-mile (1.9 km) swim in the Liu River, located in the center of the city. Spectators will have an opportunity to watch the swim from the elevated banks of the river and a nearby bridge. Athletes will exit the water to transition next to the beautiful Panlong Mountain Park. The 56-mile (90 km) bike course will take athletes north and out of the city following the river bend before crossing west to begin the second loop. Athletes can expect incredible views as they parallel the Liu River. The 13.1-mile (21 km) two-loop run course brings athletes through downtown Liuzhou, along both banks of the Liu River, with the cityscape as a backdrop to the finish.

General registration for IRONMAN 70.3 Liuzhou will open on Monday, August 29, 2016 at www.ironman.com/liuzhou70.3. Athlete inquiries may be directed to liuzhou70.3@ironman.com.

Qujing is the second-largest city in the Yunnan Province known as the “Gate to Yunnan.” Founded during the Qin Dynasty (BC 221-207), Qujing has a long history and deep culture, including the birthplace of Ancient Cuan civilization. The landscape of the region features beautiful hills and mountains paired with a mild sub-tropical highland climate; summers are not too hot, while winter is not too cold (the annual average temperature is 14.5°C/58°F). With its beautiful scenery, fresh air and water, Qujing is often touted as being one of the cleanest cities in China. It has also been named one of China’s Top 10 Most Livable Cities for many years. Key tourist attractions include Jiulong Waterfall (Nine Dragons Waterfall), the Luliang Colorful Sand Forest, Three Gorges of Lubuge and the Tiansheng Cave.

The IRONMAN 70.3 Qujing triathlon, taking place on May 28, 2017, will begin with a 1.2-mile (1.9 km) swim in the Miandian reservoir. Athletes will then transition lakeside before beginning the 56-mile (90 km) bike with a slight climb into the hills that surround the reservoir. The course then descends back towards the city following the base of the hills heading to the southern edge of the city. The route runs straight through the heart of Qujing, making its way towards the Qujing Sports Culture Park. Competitors will pass by the park then head west to the edge of the city and ride a portion of the loop through the heart of the city before coming into T2 at the Qujing Sports Culture Park. The 13.1-mile (21 km) run is a three-loop course around the Qujing Sports Culture Park. As athletes follow the course through the sports culture campus they will have a chance to see the beauty of Qujing’s old world architecture in contrast to the sleek modern designs of the sports arenas. At the end of their third loop, athletes will get to celebrate the day’s accomplishments at the finish line on the plaza between the new soccer and basketball stadiums.

See also:  Swimming in a Triathlon Wetsuit- A Beginner's Guide

General registration for IRONMAN 70.3 Qujing will open on Monday, August 29, 2016 www.ironman.com/qujing70.3. Athlete inquiries may be directed to qujing70.3@ironman.com.

Chongqing is a beautiful and historic city in southwest China where the roaring Yangtze River runs through lofty mountains and the Yangtze Gorges. Over 800 years ago, Emperor Guangzong of the Song Dynasty was crowned king before ascending to the throne as Emperor, resulting in his Chongqing or “double happiness,” giving the city its name. A great tourist destination, Chongqing offers magnificent stone sculptures of the Mercy Buddha, a cable car that crosses the Yangtze River with views of houses on stilts which are built on the slopes along the river, and more than 10,000 river bridges. Visitors can enjoy authentic Sichuan food and relax in a hot spring bath or take in fantastic artistic performances.

The IRONMAN 70.3 Chongqing triathlon will debut on September 24, 2017 and begins with a 1.2-mile (1.9 km) swim in Lotus Lake in the mountains of Xingfu Reservoir in Shapingba District. The 56-mile (90 km) bike course takes athletes through rural sections west of Chongqing with scenic mountain views. The course will pass through modern landmarks, such as the College Town of Chongqing, Micro Electric Park of West Chongqing, and the Departure Station of Chongqing-Xinjiang-Europe International Railway. The 13.1-mile (21 km) run course will take athletes through the Chongqing College City area and around the newly developed parks and running paths that dot the district, with the finish line at Youth Square.

General registration for IRONMAN 70.3 Chongqing will open on Monday, August 29, 2016 at www.ironman.com/chongqing70.3. Athlete inquiries may be directed to chongqing70.3@ironman.com.

For more information on the IRONMAN brand and global event series, visit www.ironman.com.