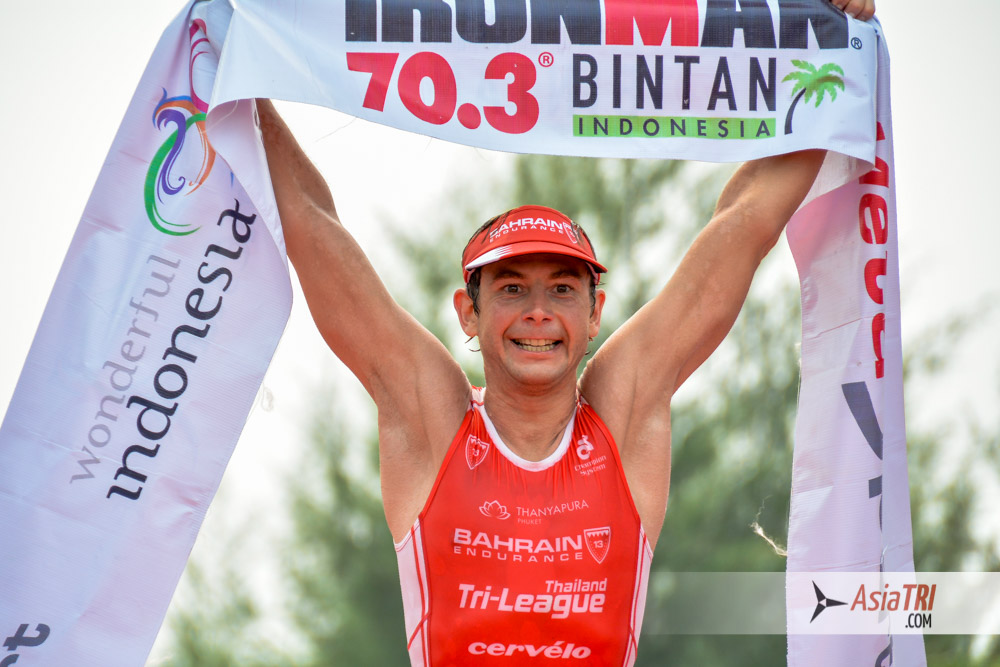 Australia’s Clayton Fettell led the swim in 22:29 with a minute gap to Michael Fox and David Dellow, and two and a half minutes to a large group of Cameron Brown, Fredrik Croneborg, Courtney Odgen, Alexander Polizzi, Kim Harju. Australian Matt Burton who eventually would lead off the bike swam in 00:26:19, almost four minutes back to the leader.

Once on the bike, the chasing pack quickly cought the leaders and Matt Burton also managed to bridge the gap. Finland’sKim Harju couldn’t keep up with the pace and got dropped just as Courtney Odgen and Cameron Brown were also dropped back and were riding together for the entire bike leg. The main pack now with 6 athletes sticked together over the rolling hills of Bintan until the 60km mark, when Matt Burton attacked the field and no one was able to match, by transition two he had two minutes and fifteen seconds lead to the chase group that now was Fredrik, Dellow, Fox and Polizzi.

On the 3 lap 21km course, Burton held the lead until the end of the second lap, when Croneborg made the pass and was able to just hold the small gap to the finish line finishing in 03:59:28, Matt Burton was one minute back in 04:00:24 and Michael Fox completed the podium in 04:01:34

Fredrik spoke to AsiaTRI after the race about his day, his preparation for the race and plans for the future:

A small women field of only 3 athletes saw Alise Selsmark leading the swim in 26:39 with pre-race favorite Kate Bevilaqua right on her heels, Amanda Wilson had a four and a half minute disadvantage to the leaders.

On the bike, Kate quickly dropped Alise and it was the beginning of a lonely day towards her win in Bintan. The biggest mover was Amanda Wilson that with the day’s best bike split in 02:32:19 managed to reach transition two just ahead of Alise.