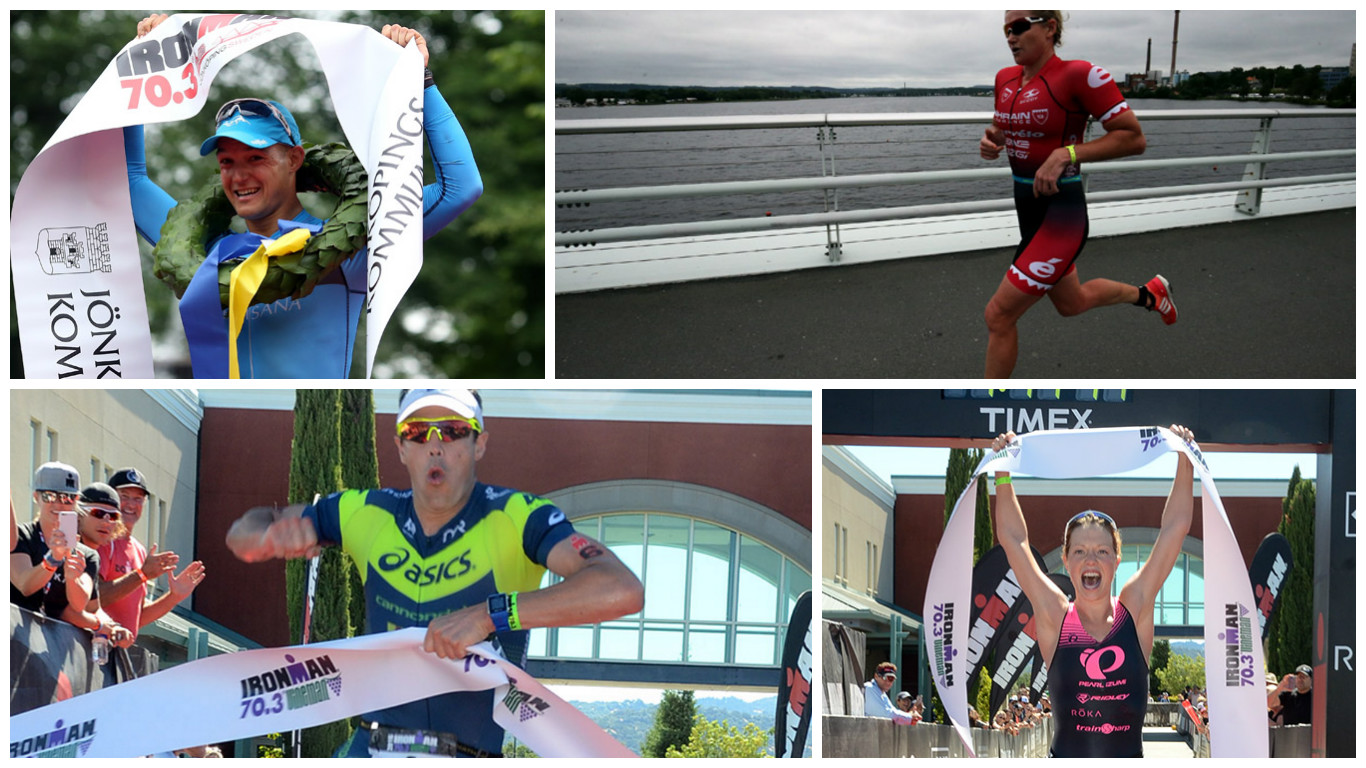 A down to the wire win for Andy Potts while Holly Lawrence was in her own zip code today at IRONMAN 70.3 Vineman.

Potts leaves it until late in the run

Bozzone was off the front throughout the 56-mile single loop bike course while all the other remaining contenders were content to float 45 seconds to a minute and a half back of the Kiwi while still keeping themselves within striking distance of the leader. Bozzone dismounted his bike and headed into T2 with leads ranging from +1:25 to +1:36 on an elite group of runners that contained Montgomery, Appleton, Alexander, Potts, Hoffman, and Reed.

The field methodically reeled in Bozzone early in the run and by mile four of his advantage was reduce to under a minute on Potts, Reed, Appleton and Alexander. The trio of pursuers running shoulder-to-shoulder could now smell blood and cranked up their pace and reduce the gap to 20 seconds heading into the second half of the run.

Potts claimed the lead at mile eight but still had Reed and Alexander on his heels. The pesky Reed made a surge at 10 miles and had Potts on the ropes momentarily but the cagey veteran managed to regroup and grab the lead once again within the next mile. Potts started to open up small gap on Reed as Alexander surrendered to the pace and slipped out of contention. Potts would round the corner and head into the finish line chute with a half a minute cushion on Reed and and over a minute on Alexander to claim his second win of the season and showing excellent form as he heads into IRONMAN Canada in two weeks.

Lawrence played “Catch me if you can” all day

Lauren Brandon (USA) exited the river with a 24 second lead on Holly Lawrence (GBR). Jen Spieldenner (USA), and Caroline Steffen (CHE) followed the lead pair into T1 with deficits of +1:17 and +2:30.

Once on the bike, Lawrence stormed to a lead with Brandon being the only one to match the speed of the leader. Brandon would succumb to the pace and would lose contact with the Lawrence in the second half of the bike. Lawrence carried a +1:44 lead into T2 over Brandon and it was shocking to see Steffen and McBride, both considered strong riders, dismounted their bikes looking at +6:25 and +9:01 deficits in third and fourth.

The day didn’t get any better for Lawrence’s competition over the next 13.1 miles as the 36-year-old was laying down the race-best run on the day. Lawrence would capture the title by winning margins of +8:09 and +13:08 on Steffen and Brandon and proving her upset win at IRONMAN 70.3 Mount-Tremblant was no fluke.

The inaugural IRONMAN 70.3 Jönköping proved to be a fast and exciting race for the Scandinavian circuit.

The Scandinavians are known for their friendly and calm temper, for their beautiful nature and the sometimes rough weather conditions. 1,800 athletes wanted to find out for themselves and registered for this first edition of IRONMAN 70.3 Jönköping. The one-lap swim was held in the spectator friendly Lake Munksjön, the flat bike course lead through the beautiful villages and lakes around Jönköping. While the two and half loop run was held in the city center with crowds of spectators cheering on an exciting race.

The men keep it a tight race

The 1.9 km swim were dominated by Austrian Martin Bader who came out of the water in 00:23:04. He kept his leading position on the bike for quite some time, while the chase pack included Frederik Van Lierde (BEL), James Cunnama (RSA) and Andreas Dreitz (GER). There were some changes in the lead from km 20 and Florian Seifert (GER), Bader, Dreitz and Cunnama alternated in the top position on the bike. At km 80 Dreitz took the lead, Cunnama chased him down just a few seconds behind but the German kept his position. When Dreitz made it to the run Cunnama was still behind him but he lost connection and the gap between them continued to grow. Dreitz made it to the finish with quite the lead and won the inaugural IRONMAN 70.3 Jönköping in 03:49:45. Van Lierde—who just recovered from an accident resulting in a broken collar bone three months ago—maintained a thrid place pace throughout the race, but shortly before the finish line he overtook Cunnama and nabbed the second place title in 03:52:40. Cunnama wasn’t able to hold on which lead to a third place finish in 03:53:01.

Swallow runs away with it

Jodie Swallow (GBR) had a strong race, she even caught the male pros in the water and was the first woman out (8thoverall) in 00:24:18. On the bike she hung on to the top spot but fellow country woman Kimberley Morrison came close and they continued their bike ride shoulder to shoulder. Morrison made it to the transition first—but only three seconds ahead of chasing Swallow who had a faster transition and was first on the run course. On the half marathon Swallow increased the gap and simply ran away toward the finish line. She took the victory in Jönköping in 04:19:19. Morrison stayed in second position for a while but was unable to keep the pace, she was overtaken by Swedish hope Asa Lundström who slowly but surely came closer from behind. Lundström finished took home a second place finish in 04:24:58, while Morrison rounded out the podium in third with a time of 04:25:20.