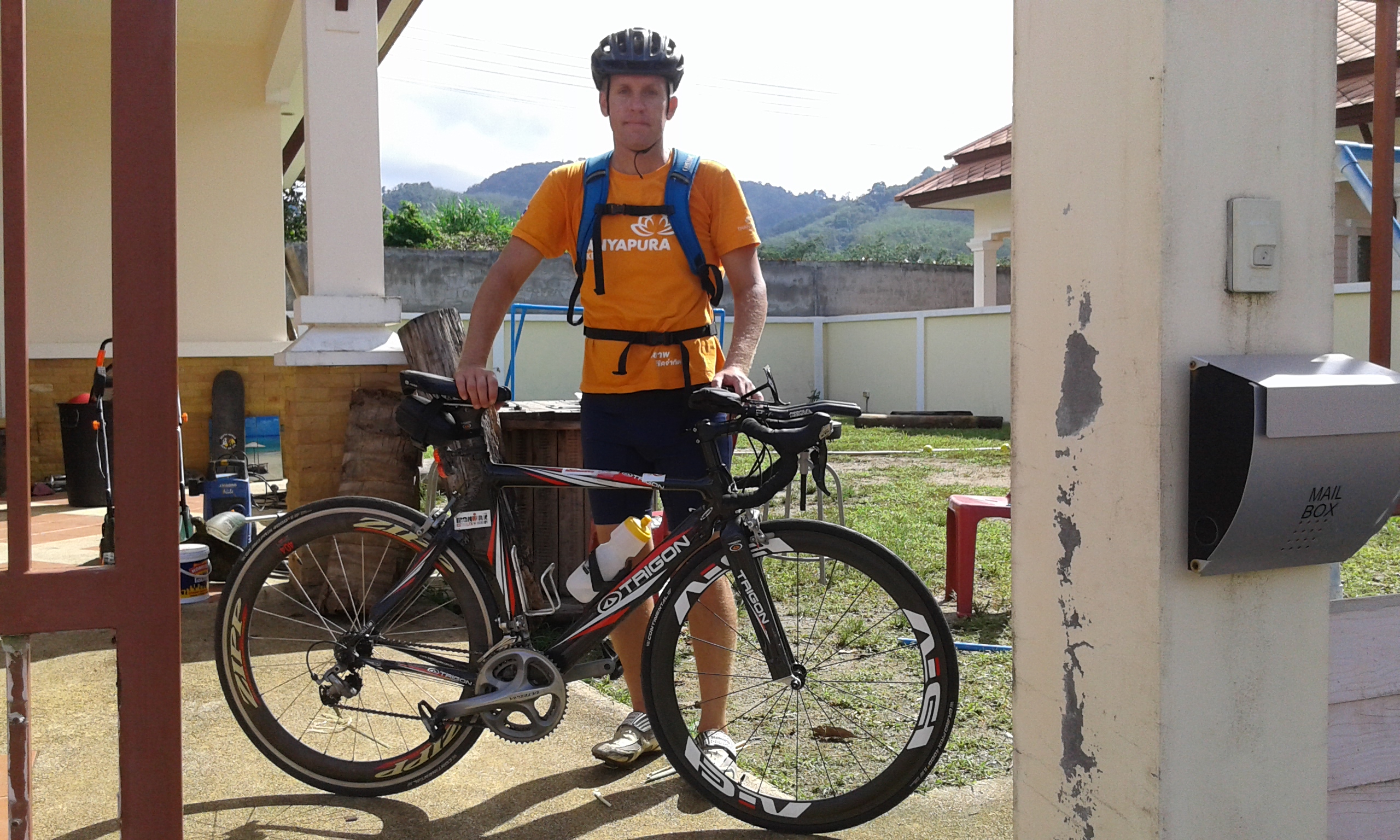 American based in Thailand to do challenge for charity.

Meet David Mayes, a New Yorker who left his home state, fell in love with Thailand, found his wife there, and will now do a challenge that is extreme, that if you asked him years back if he would do such a thing, he will probably tell you, you are crazy.

A man who usually crunches up numbers in his desk all day, he got out of shape after the birth of his first son.  Working as financial consultant in Bangkok, he gasped for air and got so winded after tackling a single flight of stairs.  “I got worried and scared…I was thinking about my son….and myself too”.

He moved back in Phuket to set up his own financial services company, partly because he wants to control his own time.   Needing to get in shape too, he signed up for his first marathon, Laguna Phuket marathon, loved the finisher’s euphoria, and got hooked on training since then.   He got addicted with the active lifestyle that he joined his first triathlon in Laguna Phuket Tri and finished,  using a mountain bike. The newfound passion with triathlon led him to races all over Southeast Asia.  Some of his finishes were Laguna Phuket, IM Singapore 70.3, Ironman Jeju, Metaman Full in Bintan and has done Ironman Malaysia the past two years.

He met Damien Rider, an Aussie who advocates child abuse prevention, while doing one of his paddle and run challenges.  While run-walking with Rider, and learning about his advocacies, it opened up his mind on challenging himself further, more than the joy and euphoria of getting finisher medals in races.

Having seen and heard news of poor Thai children being homeless and being abused in the slums of Phuket and Patong, he realized in one particular moment that there is more to the basic study-work-raise the kids-retire-then die routine.  One day, his 2-year-old son fell and cried loudly.  He comforted him, but the idea that lots of other children in his area do not have the luxury of a parent comforting and caring for them broke him down.  It struck him so much that he wrote a note:  “One day… I want to build an orphanage for this kids.”  Being a good father was given, but making a huge positive impact on the lives of others was now the bigger goal.

He then met Roelien Muller through a common friend.  Muller runs the Asian Center Foundation, a non-government organization aiming to help disadvantaged children by providing care, training and education.  Learning that the foundation is operating on rented land, Muller and Mayes hope they could build a school in a land generously donated in Phuket.

This circumstances led him to do this challenge.  To do the 39 straight Half Ironman distance from his house for 39 straight days, bringing engagement and awareness. Hopefully, fellow triathletes all over Asia will chime in and donate for the construction a school building.

To prepare for the challenge, he extensively researched and read the exploits of  the Iron Cowboy (50 ironman in 50 days) and Kean Karnazes (50 straight marathons).  He studied how they would recover, the eating pattern and the training blocks.  He started doing bricks of shorter distance (30k bike-10k run) then progressing to the longer stuff of 90k-21k, alternatively doing them in 5-10 days blocks.  He would also rest for days to recover, preventing any injury that might screw up the goal. There are days when fatigued creeps in.  It’s a challenge alright.  But David never wavers. “For me, the real challenge is not finishing the 39 days. The finishing line is the 3 million Baht the foundation needs, and my finishing medal will be the brick and mortar of that education center.”

For more information on David’s quest: