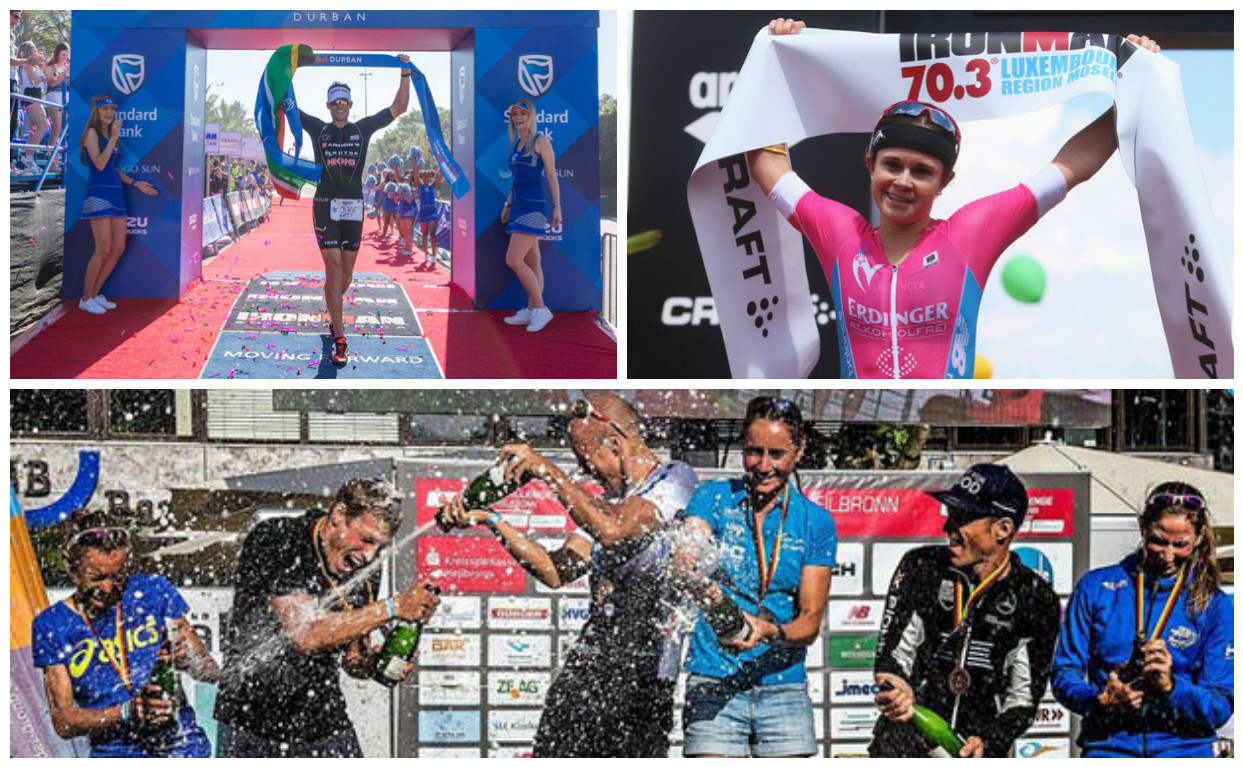 With the unpredictable weather all over Europe, the swim in Luxembourg had to be cancelled due to recent flooding of the river Mosel. The race was changed from triathlon to duathlon with a 5 km run instead of the swim.

1,700 athletes started the race in Remich with a rolling start. After the 5 km run on the official run course, Youri Severin from the Netherlands entered T1 first and started off on the bike. The first bike leg is very flat leading along the river Mosel. The second part brought the athletes across the hilly and challenging vineyards. Favorite Boris Stein, who just won the IRONMAN 70.3 Kraichgau two weeks ago, proved to be in great shape and soon lead the race on the bike. There was a close pack to follow, with Evert Scheltinga (NED), Frederik Van Lierde (BEL), Timo Bracht (GER) and Thomas Leboucher (FRA) behind him, but he kept his pace and didn’t give up his position. Bracht had to pull out due to a technical bike defect. The other chasers lost the connection and Stein made it to T2 with a four minute gap.

On the half marathon, Stein kept his lead, Van Lierde fell back and Scheltinga and Patrick Dirksmeier stayed behind him, but couldn’t bridge the three to four minute gap. Bas Diederen speeded up and finally closed up to second position. Stein brought it to the finish to win his fourth IRONMAN 70.3 race in 3:46:28. Bas Diederen finished second in 03:50:07, Evert Scheltinga got third in 3:51:06.

Natascha Schmitt didn’t leave any doubt from the beginning that this was her day and her race. After getting second last year, she had a clear goal for this year’s edition. Although Jil Gloesener (LUX) was first on the 5km run (21:55) Schmitt overtook her in T1 already and from then on lead a lonely race. On the bike Daniela Sämmler (GER) came second but with a seven minute difference, neither her nor Alice Hector (GBR) were able to close the gap.

On the run there were no big changes—the gap just got even bigger and after 21 km in the city, Remich Natascha Schmitt won her second IRONMAN 70.3 race in 4:17:28. Daniela Sämmler came second in 4:27:28, exactly 10 minutes later. Third was Katharina Grohmann (GER) in 4:27:54, who completed the German podium at the IRONMAN 70.3 Luxembourg.

South Africa reigned in women’s race as well. Lucie Zelenkova led the pro field out of the water in 27:09, in sixth place overall at that point. This first gap, three minutes to Claire Horner and Annah Watkinson and almost eight minutes to the defending champion Parys Edwards (GBR), seemed comfortable.

Following the swim, Watkinson and Edwards put up awesome bike splits, with Watkinson taking over the lead on the second half of the bike course and Edwards storming through the South African line in front of her. After 60km Watkinson closed the gap enough to move into the lead as Edwards made up a big chunk of time to move into second position with Zelenkova dropping to fourth behind Horner.

With a 2:41 lead, Watkinson managed to hold off the challenge from Edwards to finish in a time of 4:35:40, three minutes ahead Edwards who put in a big effort to claim second place in 4:38:47. This is Watkinson’s first IRONMAN 70.3 win after turning professional this year. Claire Horner rounded up the podium finish in 04:48:21. Zelenkova finished fourth announcing on the finish line that this would be her last IRONMAN 70.3 race as a professional.

One week after celebrating a great performance at IRONMAN 70.3 Staffordshire, Matt Trautmann topped off his result in England with an outstanding course record win at the Standard Bank IRONMAN 70.3 Durban. The South African was a touch behind the fastest swimmer Clinton Gravett (RSA) in T1 who was able to show an excellent swim (23:12) although the sea was very rough due to strong winds. Only the professional athletes were allowed to enter the ocean because of the choppy water. Trautmann exited the water in 26:21, leading a group of strong compatriots like Stuart Marais, Kent Horner and Freddy Lampret.

Co-favorite James Cunnama (RSA) lost a lot of time in the water but the IRONMAN France runner-up caught up with the other podium candidates thanks to a strong bike ride later in the race. Trautmann made his way to the front at the 50 kilometer mark and then hammered away to set a course record, while Stuart Marais secured second place with the fastest run split. Freddy Lampret rounded out the podium in third.

The wins adds luster to Böcherer’s 2016 season, which includes a win at Challenge Fuerteventura in April.

Coming off wins at Ironman 70.3 Mallorca and Ironman 70.3 St. Pölten, Laura Philipp entered Challenge Heilbronn on a hot streak and as defending champion.

A tied-for-3rd-best 16:07 split for the 1 kilometer swim left Philipp 20 seconds back of swim leader Julia Viellehner and 24 seconds ahead of serious rival Julia Ertmer, and more than a minute ahead of top contenders Lena Berlinger and Barbara Scherrer.

Amelia Watkinson makes it 3 wins in a row, Kevin Collington takes the men's title at the inaugural Ironman 70.3 Busan in Korea