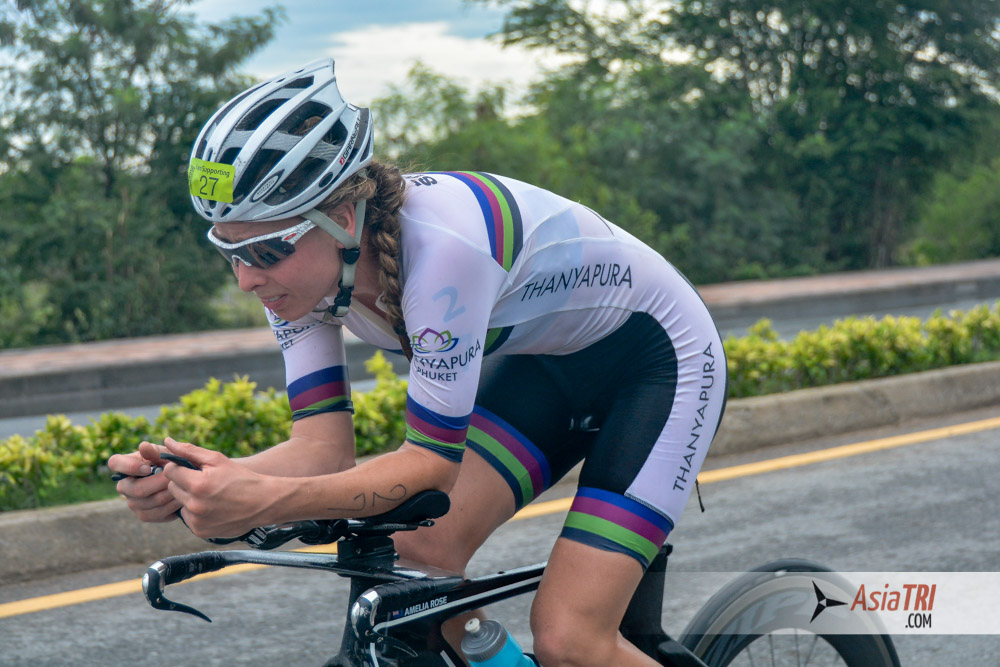 Amelia Watkinson (NZL) is taking the Asian triathlon scene by storm, with two wins in 3 weeks (Pattaya Triathlon and 5150 Subic Bay), she not only managed to win by a large margin, but also finished 3rd and 2nd respectively on each event, not far back from some world class male triathletes. We interviewed Amelia, who is now living and training in Phuket as part of the new Thanyapura Triathlon Team: 1. Can you tell us about your background? Please describe how did you get into the sport until where you are now in your career.
In school I played all the team sports available, I wanted to be a professional basketball player at one stage. At age 15 I attempted my first triathlon; It had a kayak leg instead of a swim, I fell out of my kayak at least a dozen times, loaned a road bike from a friend and didn’t know how to change gear, by the time I got to the run, my best discipline, others were crossing the finish line. A few months later I met Jo Lawn (7x NZ Ironman Champion) who encouraged me to start up cycling.
I bought my first bike, became a lot more savvy with my equipment and was keen to give Triathlon another go. I was usually on the podium at national running, cycling and triathlon events through Collage and while studying Architecture at University. I won my age group at 2012 ITU Long Distance World Champs in Spain. Was the first kiwi home at 2014 NZ National Half Ironman Champs and I decided to do my first race as a Professional September 2014 – Challenge Gold Coast, which I won. I struggled with a hip injury a lot of 2015 limiting my triathlon racing. I compensated with domestic cycling races. I’ve since placed a lot of emphasis on strength and conditioning to come back for a strong and consistent season this year.
2. You’ve had two very dominant wins; at Pattaya Triathlon on 21st May 2016 and 5150 Subic Bay on June 5th 2016 – Coming in 3rd and 2nd overall behind world class athletes. Was this the first race of the season and were you expecting such a strong performance? What were some of the highs and lows of the race for you?
No, not expected all, though it has been a great way to start my season in Asia. Having just arrived in Thailand from New Zealand two days before Pattaya the heat was an added challenge, although I think I got lucky in that by Thai standards it was a cold day. The atmosphere at the finish line was amazing, one of the best I’ve ever experienced.
By 5150 Subic Bay I’d had a chance to do some training in the hot conditions. It was my first time to the Philippines and I’d definitely like to return. Having lane ropes to follow the entire swim leg was a special treat and made and took sighting out of the equation. On the run leg I was stoked to see so many smiles. Another great event with so much hype and enthusiasm. 3. What were your best results so far and what are the plans for the future, both short and medium terms?
I am National Half Ironman Champion in New Zealand. I finished 2nd at 70.3 Taupo, 5th 70.3 Putrajaya, 11th Challenge Bahrain in a World Class field, and have won numerous domestic cycling races in New Zealand. In the short term I’ll be focusing on Half Ironman distance races; racing 70.3 Asia-Pacific Champs in Cebu 7th August, then racing the half ironman Asia-Pacific circuit through till the end of the year.
4. You are now part of Thanyapura Triathlon Team – despite being in Phuket for only two weeks what are your first impressions of the island and Thanyapura? What attracted you to this opportunity?
Being based at Thanyapura Phuket is a huge opportunity for me. To be based in a warm climate, have access to world class facilities and be a part of a likeminded motivated community makes for perfect training grounds. Our central location (in comparison to New Zealand) makes racing much more accessible.
I love the food, culture and people in Southeast Asia, especially Thailand. The weather is a little bit unsettled in rainy season but 30 degrees certainly beats the single figures at home. 5. Can you share with us a typical training week? What type of load do you do and which is your favorite training session on each discipline?
A typical training week consists of around 30hrs training plus recovery and gym work. Squad swim sessions are key, having people to push you and all wanting to get the most out of a session. I like a solid aerobic main set. Phyrimids are always good, as the fatigue sets in at halfway you have to pick up the pace again.
On the bike I find hills are brilliant for building strength. Riding a loop with at least 1000m of elevation, a good bunch of people and spontaneous attacks up the hills or through the head winds makes for solid session of efforts without you even noticing. If you don’t have a bunch to ride with long hill reps on your area bars are great for the gluts.
Running wise I can’t go past long easy trail runs, they build a strong base to start doing speed work closer to race day.
Recovery and strength work is the 4th discipline. Sourcing specialist knowledge to get a strength and conditioning program specific to your weaknesses, not only improves your power but prevents injury. A little bit of foam roller in a great way to end the day. Or if you’re living in Thailand massage is very accessible.
–
Learn more about Amelia on her personal website:  www.ameliarosewatkinson.com
Follow us

Video: How To Cycle More Safely