Amelia Watkinson makes it 3 wins in a row, Kevin Collington takes the men’s title at the inaugural Ironman 70.3 Busan in Korea 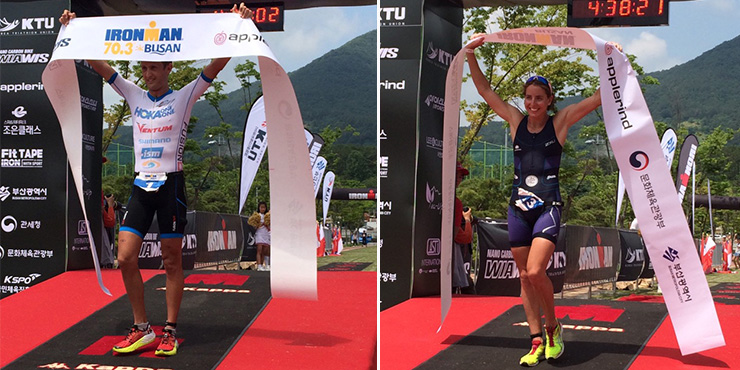 The pair overcame some challenging conditions to win impressively after strong currents forced a shortening to the swim course and low overcast conditions proved challenging in the swim and brought some wet roads in the hills on the bike.

There was plenty to shout about for Asian fans with the super-inspirational Shiao-Yu Li from Taiwan finishing third in the women’s race while Younghwan Oh from Korea was fourth in the pro men.

American jumps to top of podium

Collington, a former well-performed athlete in the ITU circuit, has amassed a bundle of podiums over the IRONMAN 70.3 distance throughout the Americas as well as two top-six finishes at the IRONMAN World Championships.

However it was his first venture to Korea, coming off the back of the podium at IRONMAN Brazil and against some well-seasoned performers who were in-form after last week’s race in Japan.

The swim was shortened to around 1km because of strong currents and extremely low-cloud conditions which proved a navigational challenge to some.

It was not the case for New Zealand’s Guy Crawford who towed Collington around the course to emerge with a 45 second advantage over Asia-based Swede Fredrik Croneborg and Aussie Ben Cook, with Colombia’s Rodrigo Acevedo a further minute back.

Crawford and Collington pushed hard early on the bike through the damp conditions and on the climb of Dalmaji Hill, going out to 2:45 at 50kms from Acevedo who pushed through the pack.

The Kiwi then suffered a double puncture that wrecked his chances, ultimately finishing fifth, while Collington progressed solo to finish the 90km bike with a 2:30 advantage from Acevedo while Croneborg recovered to be 7:33 behind after taking a wrong turn on the bike and losing some time.

The American ran a steady 1:24:30 effort for the 21kms to protect his buffer in the challenging conditions with close to 100 per cent humidity to win in 2:06:27.

Acevedo, who was third in Japan last weekend, went one better to finish 2:14 behind while Croneborg had the best run split of 1:21 to dash to third, a further two minutes behind the runner-up.

“I had a win in Seoul in the ITU days but this is my first for IRONMAN which is fantastic,” says Collington. “We had no problems on the swim. Guy was really strong on the bike which was super difficult with some rain in the hills. But he got a double flat after the 50km mark and I was bummed to be on my own for the last 40kms.

“I ran steady and able to protect that lead on the bike to get this win.” Watkinson has been quite lightly raced in the last 12 months after emerging on the podium at the IRONMAN 70.3 Asia-Pacific Championships in Auckland last year. In the past month she won: Pattaya Triathlon, 5150 Subic Bay

She wasted no time in asserting herself as she pushed hard at the front of the swim to open a handy two minute advantage over Australians Michelle Duffield and Kym Coogan, as top seed Kate Bevilaqua went off course to lose valuable time and would later withdraw with a mechanical problem on the bike.

Watkinson has been focussing on bike racing this year from her base in Hawkes Bay, and used that to good effect as she just powered away from the field, opening a nine minute gap midway which stretched to 17 minutes at T2.

While Duffield ran strongly off the bike for the best split of 1:30 for the tough 21km effort, Watkinson won in a canter in 4:21.38. The Kiwi was fourth fastest overall with a final winning margin of 14 minutes over an impressive Duffield with Li running up to third from Coogan.

“The bike course was quite tough as it had a few hills in there and quite technical. I have been doing a lot of road racing over the last six months so it probably suited my strength,” says Watkinson.

“The run was quite friendly in being able to track your competitors and plenty of aid stations so I took it easy to begin with and built in to it.”