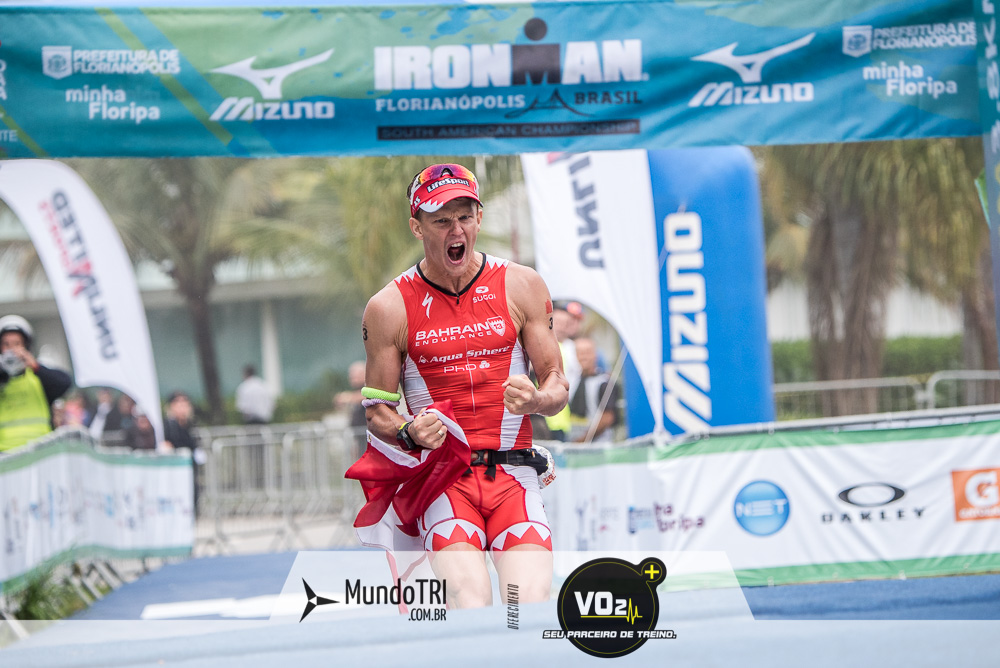 On a day plagued by tough weather conditions, both the men’s and women’s champions broke course records; Canadian Brent McMahon’s winning time was only 12 seconds off of the current IRONMAN record.

McMahon in a league of his own

A group of ten men exited the swim within a minute of each other, and led by Marcus Fernandes (BRA). Many of the contenders were contained in that elite group, including Brent McMahon (CAN), Paul Mathews (AUS), Igor Amorelli (BRA), Tim Don (GBR), Daniel Fontana (ITA), and Kevin Collington (USA).

Early into the bike the skies opened and began to pound competitors with rain making for treacherous and cold conditions through most of the bike. Amorelli, Wil Clarke (GBR), Collington, Fontana, Mathews, and McMahon took advantage of the circumstances and began to pull away from the field. At 55 km’s, Amorelli and McMahon separated themselves to the front of the race with Mathews, Collington, and Don falling back but still remaining within striking distance of the lead pair. Nearing the completion of the first half of the bike, McMahon managed to create a minute and half gap on Don, Mathews, Amorelli, and Collington with the remainder of the field looking at a disadvantage of over eight minutes.

Amorelli would pull himself from the race at 100 km’s as McMahon was putting down the hammer and pulling away from his challengers. Don, Collington, and Mathews were left to battle it out for second through fourth as McMahon was placing them into double digit deficits as the men headed towards the transition at Clube Doze de Agosto. McMahon dismounted the bike with leads of over 10 minutes on Don and over 12 minutes on both Collington and Mathews as the rest of the field well back, 20 minutes off the leaders’ pace.

Heading onto the run, McMahon had a lead of over a 2 km before Don would hit the marathon course in pursuit of him. As hard as he tried, however, Don couldn’t find a chink in the armor of the running pace set out by the Canadian at the front, and had to settle for matching his pace in the opening half of the run only. Behind the pair the gap to the leader for both Collington and Mathews continued to expand. McMahon put his run game in overdrive in the final half of the run and started to bury his competition at an alarming rate. On the strength of a 2:42:42 marathon, McMahon captured the 2016 IRONMAN South American Championship in a course record time of 7:46:10. McMahon established the second fastest time at an IRONMAN race—narrowly missing the record by 12 seconds. Don and Collington finished second and third after fading to over 18 minutes back of McMahon’s winning time. Once on the water soaked roads, Lyles started methodically working her way towards Zelenkova and grabed the lead within the first 40 km’s of the race. Lyles started distancing herself from all the women and carried advantages of 9:34 on Hufe, 11:47 on Wassner, and 11:47 on Gurutze Frades (ESP), as the women’s race hit 90 km. Monticeli, the 2015 IRONMAN Brazil champion, suffered mechanical difficulties with her bike and would never recover the time that she lost rectifying the issues she had with her shifting.

See also:  The disc wheel debate - Is it the right wheel for you?

The race would tighten up marginally over the final 90 km’s of the bike between Lyles and Huffe, but Lyles still maintained a healthy 7:36 lead on the German coming in to T2. The rest of the field was over 17 minutes back and it looked like the race would for the win would be settled between the front pair.

It was apparent from the start of the marathon that this was Lyles’ race to lose—she clicked off the km’s at a much faster pace than any of her rivals and increased the gap on all of her competition. Lyles managed to record the fastest run on the day for the a spectacular win, while establishing a new course record of 8:54:10. Hufe and Frades rounded out the podium. Caroline Steffen skips Kona to focus on the Ironman 70.3 Distance in 2016