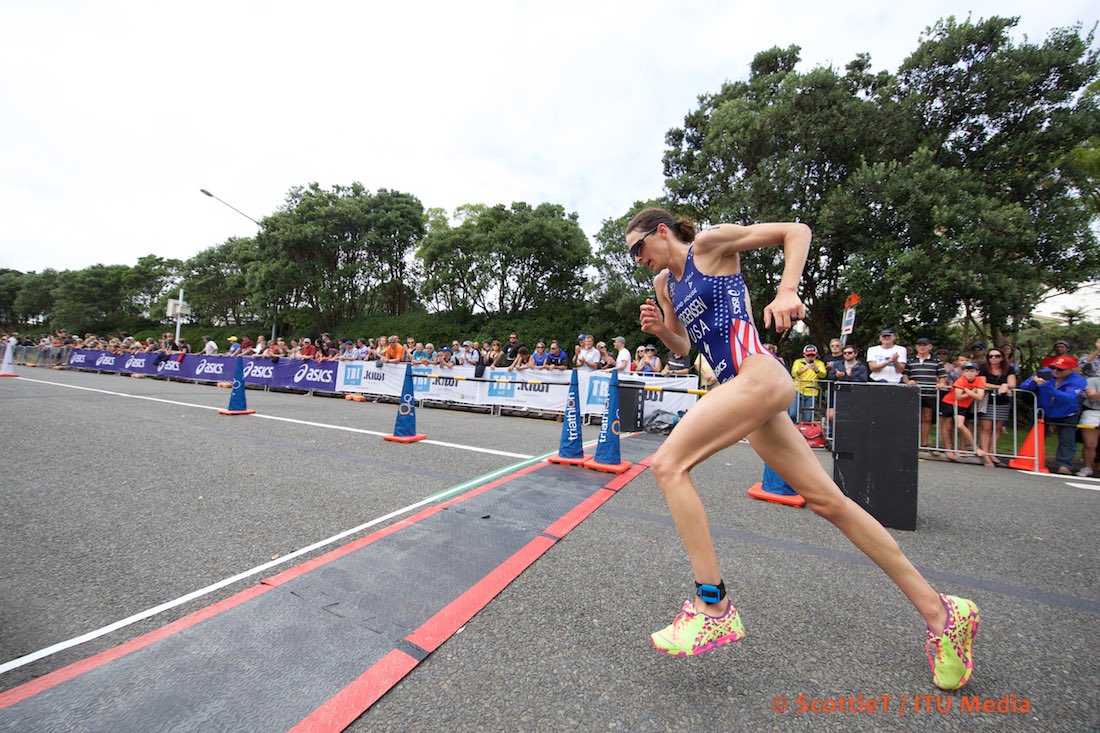 New Plymouth has proven a happy hunting ground for South Africa’s Richard Murray, defending his ITU World Cup title in a blockbuster race that went down to the wire.

It has been another positive start to 2016 for Murray, which is almost a mirror image to 2015, opening his Olympic campaign with a silver medal at the WTS Abu Dhabi season opener, and backing it up with an impressive performance over a world class field in the same location that brought him his first-ever World Cup victory just last year.

In a race that was full gas from the gun and never slowed down until the end, the experienced campaigner was able to capture his back-to-back New Plymouth title.

“Yeah it was a better swim than last year, I never know where I am so I look around and saw like ten guys in front of me.  It was a really, really good swim, hard bike course, I tried to get away with the two other guys in our group, it didn’t happen but all round it was a great race and the weather turned our great for today,” said Murray on his winning performance. “I wasn’t sure how far they were away but when I came in I saw that they had left transition, I wouldn’t say I was completely concerned but definitely had to make sure I ran the first bit a little bit quick to make sure. I managed to get them half way or ¾ of the way through the run at least.”

“I am definitely very happy with my training block here and thinking about WTS Gold Coast next weekend because I didn’t want to overdo it today, I’ve got six days of recovery plus some travel before we get to Gold Coast so its important to not over due it today and racing the Brownlee’s so didn’t want to overdue it.”

Joining Murray on the podium was Andreas Schilling (DEN) with the silver and Rostylav Pevtsov (AZE) with the bronze.

“It was perfect for me today. I had a podium last year but this is definitely my best result yet. The start of the year has been about securing my place for the Olympics and I think I’ve done that now,” said Schilling.

When asked what else he had to do for Olympic selection, “Almost, it’s because of the ranking but I’m pretty secure now. Now I’ll go home and see what I want to do next.”

Frenchman Anthony Pujades led the one-lap 750 metre swim and managed to climb out of the water first. However, he was followed by a herd that would create a busy first transition zone as the field was able to exit the water right on each other’s feet.

The mass stuck together through the first lap and after five kilometres down on the bike, a 34-strong peloton had developed.

Heading into the second lap Schilling along with USA’s Ben Kanute made a bold move and managed to break away to ride as a leading two-some. After finishing the final 10 kilometres together with the large pack just a mere 26 seconds behind, they were able to avoid the crowded second transition zone and start the run with a slight advantage.

But with Murray charging at full force onward and advancing the peloton behind him, he was able to not only catch Kanute and Schilling, but eventually pass them just one kilometre in. His charge would then take him right into the finish line and guarantee him a sixth podium in a row since the Rio de Janeiro Olympic Qualification Event held in August 2015. While Schilling was able to create a large enough gap to solidify his right to second place, the battle for the remaining spot on the podium looked like it could go to a variety of men. Pevtsov made the decision easy in the last remaining metres as he broke away from the group of Kanute, Irving Perez (MEX), Ron Darmon (ISL),Greg Billington (USA) and Marten Van Riel (BEL).

American megastar Gwen Jorgensen continued her domination on top of the podium with another impressive performance, winning the 2016 ITU World Cup in New Plymouth and getting her racing season and Olympic build up off to a confident start.

New Zealand’s Andrea Hewitt chose a home race in New Plymouth to get her season under way and what a performance taking second place. Kirsten Kasper (USA) again featured on the podium with a bronze.

“I have been in New Plymouth for a couple weeks now because my coach is originally from here and it has been great, the community has been so welcoming. I have loved being here,” Jorgensen said.

“I came here, there was a lot of good and tough athletes, a lot of fast swimmers so it was a good test. We were really pushing it on the swim, the bike and the run, so it was a really hard race.

“Next week I will start my WTS debut I guess for 2016 in Gold Coast, but the sole focus for me in August 20th, the Rio Olympics, so all of this has just been kind of training for that.”

“I have been working with Jamie since 2010 and he has helped me improve with everything, my swim, my bike, my run, I still have some learning to do, some things that I can improve upon, which is encouraging, but you know I believe I train with the best triathlon coach in the world so it has been great to have him by my side.”

Ideal weather conditions prevailed in New Plymouth this morning with a beach swim over the 750m sprint distance, led out by South Africa’s Marie Rabie, Gwen Jorgensen (USA) AND Carolina Routier (ESP). The stream of athletes behind continued and formed a front pack of 22 on the tight, technical 20km bike course.

The front pack worked well to consolidate the break over the chasing group and after the second lap was out to 35sec.
On the final 5km it was clear the winners would come from the front group with Hewitt at the head along with Rabie, Routier, Emma Jeffcoat (AUS) and Jorgensen keeping the pace high.

As they hit T2 there was a huge cheer as New Zealand’s Nicole Van Der Kaay led out, but Jorgensen made short work of getting to the front on the 5km run after dismounting in 13 position.

Hewitt went with Jorgensen and over the next two laps battled it out at the front. Hewitt never gave up the chase but in the end it was Jorgensen’s trademark run leg that delivered her a 15th career win. It was a perfect silver lining for Hewitt’s return.

“I did not know what to expect today, this was my first race of the season for me,” said Hewitt.

“My training has gone really well and I came here wanting a good result. I was pleased that Gwen was racing; we had a good battle out there, especially on the first lap of the run.

“I started on the left on the swim and I tried to stay on Carolina Routier’s feet, but it didn’t happen because I was just in the back of the front group getting on the bike. But I felt really strong today; we worked really hard on the bike to stay away from that second group,” she said.

Kasper claimed her third World Cup podium in third, with a strong all-round performance. It came off the back of a second place in a Wollongong Oceania Cup event and third place at the Mooloolaba ITU Word Cup.

“I have loved the racing and we have been training over here for a little bit, so it has been a great experience and a great way to start the season off pretty well. Today I think I executed what me and my coach set out to do, I swam hard, I worked on the bike and then it just came down to the run, where I just was able to follow my instinct the best I could,” said Kasper.