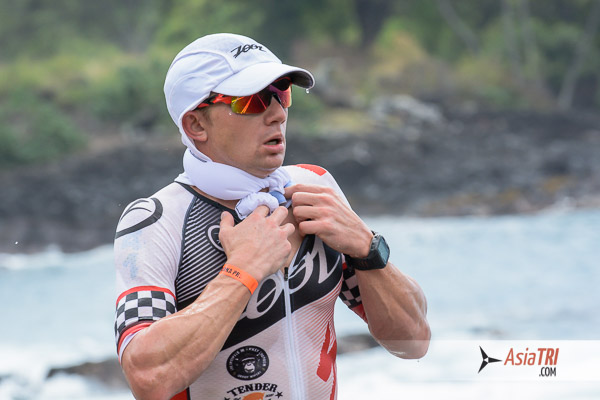 by Volker Boch (for ironman.com)

This edition of the IRONMAN African Championship without question marked a thrilling episode in the long history of this IRONMAN event. The race was under fire right from the get-go, both in the men’s and in the women’s competition

Marko Albert from Estonia took over the lead in the water immediately. Although the Indian Ocean at Nelson Mandela Bay was a bit choppy, Albert was able to set a very fast pace. At the beginning of the swim course there was a bigger group following the 2014 IRONMAN New Zealand champion. When the 36-year-old exited the water, he had downsized this group to seven athletes. Albert had the best swim (49:36) and really pushed his gears on the bike, too.

Albert and Diederen try to get rid off the runners

Albert worked hard to open up a two-minute gap together with Bas Diederen (NED) and American Benjamin Collins over the first 45 kilometers. The men knew that they had dropped some strong cyclists and runners in the water like the local heroes James Cunnama (51:54) and Matt Trautmann (54:17), as well as Ben Hoffman (52:58), Germany’s Boris Stein (54:23) and 2013 champ Ronnie Schildknecht from Switzerland (55:10). While Collins lost contact to the lead on the second half of the beautiful and flat but windy course, Diederen got off the bike in first place. Albert was only 1:02 behind, while Van Berkel reached T2 together with Hoffman and Stein 3:03 down. Kyle Buckingham (RSA) was in a good position, too. He was 3:36 down ahead of Germany’s Christian Kramer (+4:11) and Trautmann (+6:19).

Diederen then led the race over the first of four run laps, but he hit the wall after 13 kilometers and started losing time. Albert took over again from the Dutch while a fast running couple was already in sight: Hoffman and Van Berkel. The two ran shoulder to shoulder for the first half of the marathon, gaining second by second.

Through 18 kilometers, Hofmann and Van Berkel passed Albert for the lead, and right at the halfway mark the American started to break away from his Australian shadow. “The crowd boomed me away,” said Hoffman talking about a marathon of 2:45:50 and a demonstration of consistency. Van Berkel never gave up in second place, but he couldn’t touch the American leader. “I settled in, and I really felt like being at home,” said Hoffman after the race. “I’m definitely coming back next year.” Hoffman earned the result of “a hard winter’s work” ahead of Van Berkel and a strong Estonian. Although Trautmann looked like he’d be the one to cross the finish line in third place, Albert out-sprinted the local hero on the final kilometer. Swallow hammers in the water

In the women’s race, the whole competition was sprint-like as well. Defending champion Jodie Swallow (GBR) hammered away in the water from the get-go, and when she entered T1 after 52:10, the 34-year-old was 3:55 in front of Australian Annabel Luxford and more than six minutes ahead of a group including Dede Griesbauer (USA), Susie Cheetham (GBR), Lehtonen, and Darbi Roberts (USA). At the half-way point of the bike, Swallow was leading Luxford by 90 seconds, but the rest of the field was quite farther back. Lehtonen, in third, was already 11:45 back.

Still in the lead, the defending champion crashed only 20 kilometers later. Swallow needed a bit of time to fix her bike and body, but she was able to start into the race again. Luxford took over the lead and eventually managed the fastest bike split of the day (4:49:17). When she came off the bike, Swallow was 6:45 behind followed by the strong duo Gossage and Lehtonen (+13:43).

Once on the run, Swallow suffered badly from her crash. She felt pain on every single meter she ran and had to drop out early. The way seemed to be free for Luxford. The Australian led the race for many kilometers in a great style, but there was a trio moving fast forward behind her: Gossage, in fourth place really pushed Cheetham in thrid, and the two made Lehtonen have to push the pace in runner-up position.

Luxford’s advantage became smaller and smaller the longer the marathon went on. Through 25 kilometers Lehtonen made the pass, or better: She flew by. Thanks to a sensational marathon, the 34-year-old from Finland ran to the victory in her second IRONMAN ever after being runner-up at the IRONMAN Barcelona last October. Similar to last year’s IRONMAN African Championship, Cheetham and Gossage completed the women’s podium – but they changed positions this time.